Edit the text with your own short phrases. The animation is already done for you; just copy and paste the slide into your existing presentation. To change.

Presentation on theme: "Edit the text with your own short phrases. The animation is already done for you; just copy and paste the slide into your existing presentation. To change."— Presentation transcript:

1 Edit the text with your own short phrases. The animation is already done for you; just copy and paste the slide into your existing presentation. To change the background image, on the Design tab of the ribbon, click Format Background, and then Insert picture from File. Sample picture courtesy of Bill Staples. Settling the West Chapter 3 Section 1

2 Miners, Ranchers and Railroads Following Reconstruction, many people began to move West. They were drawn by the promise of gold, silver and copper. They sought new lands to farm and untapped natural resources. The movement West was made possible by the construction of the railroad. The increase of settlers coming into the West had a great impact on the Native Americans, many were forced to relocate or assimilate into American culture.

3 Miners seek to strike it rich! Deposits of gold, silver and copper in the West served the needs of growing industries in the East. Comstock Lode discovered in 1859 in Nevada. The discovery turned Virginia city into a boom town with a population of 30,000. When the silver veins were exhausted, townspeople moved on and it became a ghost town.

4 Ranching and Farming the Plains While many Americans headed to the Rocky Mountains to mine gold, others began to build vast cattle ranches and farming homesteads on the Great Plains. Cattle industry grew because of the open range- a large area of government owned grassland. The Great Plains were thought to be unsuitable for farming, but the construction of the railroad granted easy access and the promise of land.

6 Homesteaders 1862 the government wanted to support settlement on the plains and passed the Homestead Act. For a $10 registration fee, an individual could file for a homestead (a plot of land available for settlement). A homesteader could claim up to 160 acres of public land and could receive title to the land after living there for five years. Although their property rights were secured, they found life on the plains very difficult. They faced prairie fires, swarms of grasshoppers, blizzards, and tornados.

7 The Railroads: Linking the Nation The railroads began in 1862 when President Abraham Lincoln signed the Pacific Railway Act. It provided for the construction of the transcontinental railroad by two companies the Union Pacific and the Central Pacific. The two companies were granted public lands from the federal government along the route of the railroad. The transcontinental railroad linked the nation together and made it possible for settlers to travel to the west, and ship products back to the east. (cattle, lumber, copper…).

8 Results of the Railroad Growth Economic growth and population in the West increased. Railroads provided better transportation for people and goods They also encouraged people to move west. Railroads became one of the country’s biggest industries.

9 Conflict in the West Clash of cultures The settlement of the West dramatically altered the way of life of the plains Indians. As ranchers, miners, and farmers moved onto the Plains, they deprived Native Americans of their… Hunting grounds Broke treaties that guaranteed them certain lands Forced them to relocate to new territory The U.S. government negotiated new treaties after gold was discovered in Colorado, sending Native Americans to live on reservations, areas of federal land set aside for them.

10 Conflict and Assimilation Due to growing conflict congress in 1867 formed the Indian Peace Commission – which established two large reservations on the Plains. (Sioux) The Bureau of Indian affairs would run the reservations, and the army was given the authority to deal with any groups that would not report or remain there. The commission failed due to corruption. Conflict and violence spread throughout the West. Resistance from the Native Americans.

11 Conflict and Assimilation Many Indians turned to the Ghost Dance Religion -celebrated their hope for a day of reckoning (to regain their strength and their lands) Wounded Knee Massacre - 300 men, women, and children Sioux were killed - Considered to be the last battle of the Indian Wars Congress again attempted another policy- Assimilation, which would bring an end to the reservations and absorb the Native Americans into American culture. They were expected to become landowners and citizens. This policy became law in 1887 as the Dawes Act, it allotted 160 acres of land to the head of each household. Again the act failed since the Native Americans were unwilling to adopt the American way of life.

Download ppt "Edit the text with your own short phrases. The animation is already done for you; just copy and paste the slide into your existing presentation. To change." 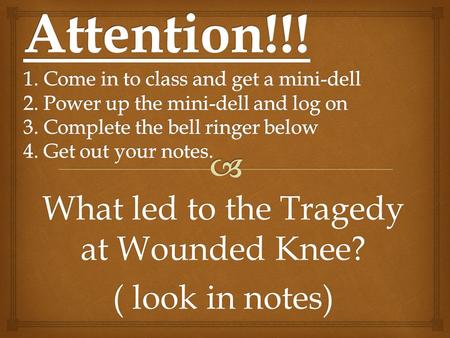 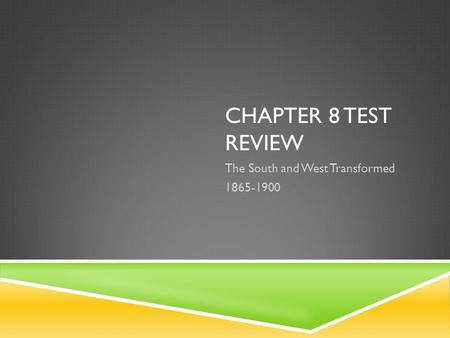 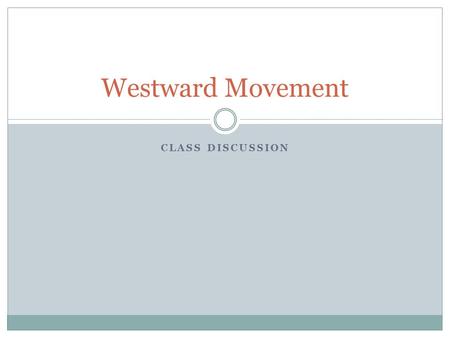 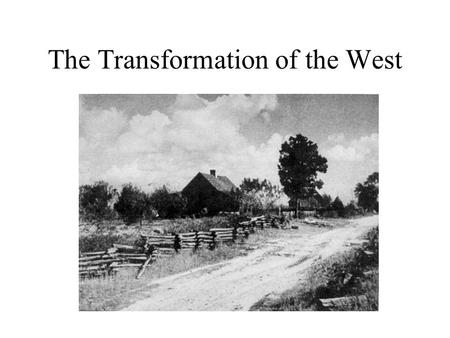 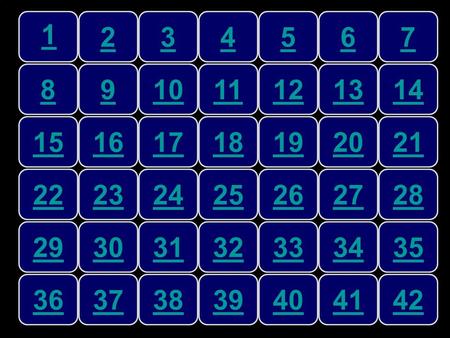 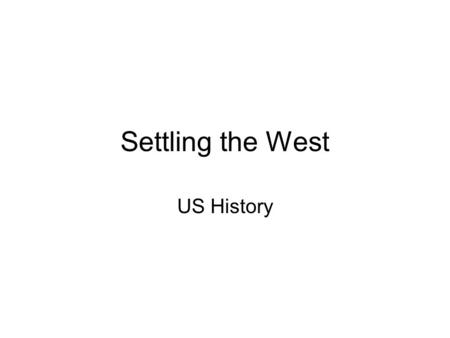 Settling the West US History. What is the West? Why is it important? Frederick Jackson Turner, 1893: In the US the West gave rise to inventiveness independence. 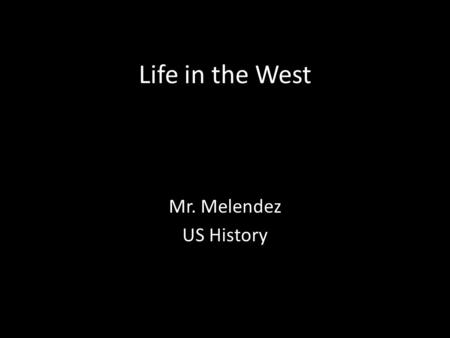 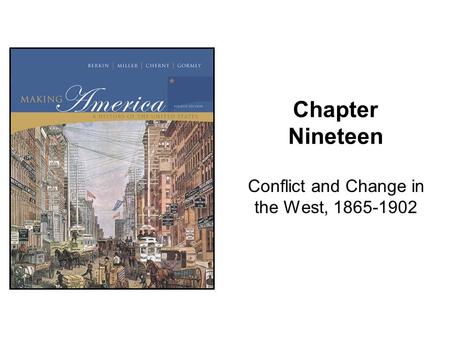 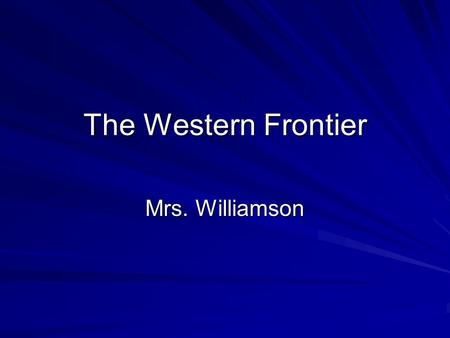 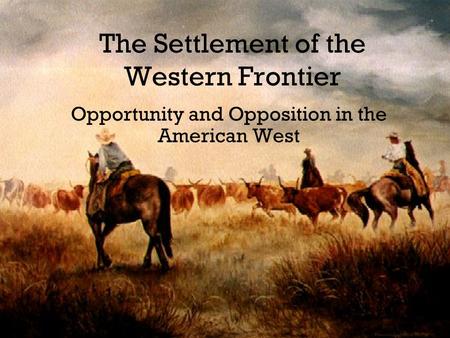 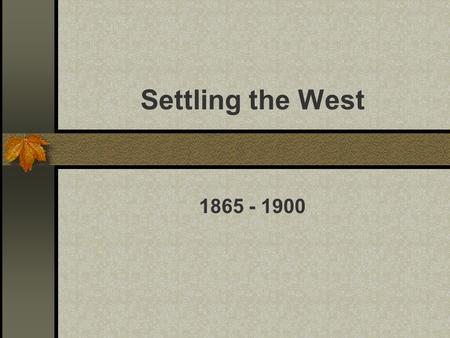 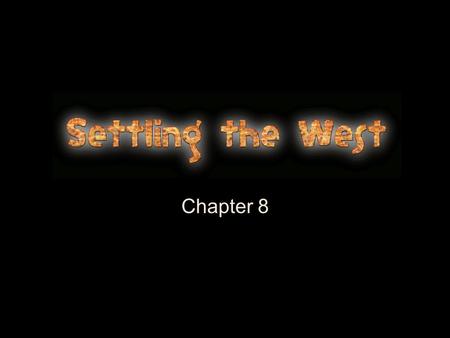 Chapter 8.  What do I need to be able to do by the end of this chapter? Trace the growth of the mining industry in the west Describe ways in which technology. 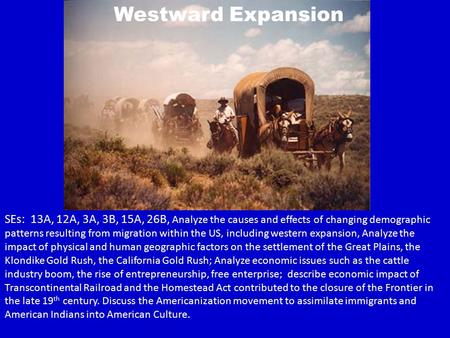 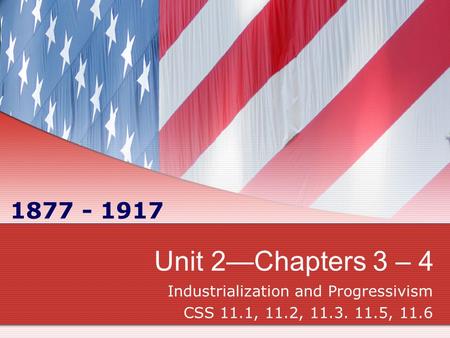 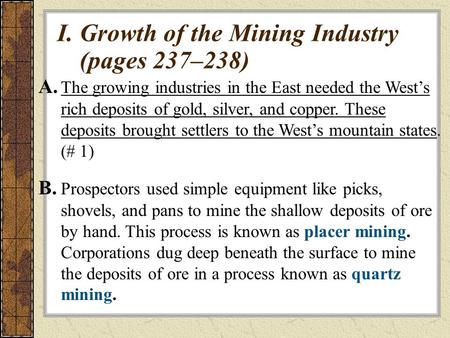 I.Growth of the Mining Industry (pages 237–238) A. The growing industries in the East needed the West’s rich deposits of gold, silver, and copper. These. 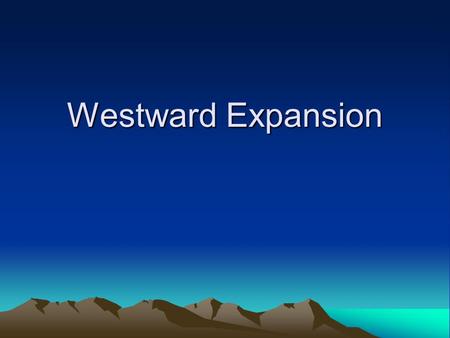