2 Biodiversity Objectives 11 Ch. 10-1 1. Describe the diversity of species types on Earth, relating the differences between known numbers and estimated numbers 2. List and describe three levels of biodiversity 3. Explain four ways in which biodiversity is important to ecosystems and humans. 4. Analyze the potential value of a single species

3 A World Rich in Biodiversity Biodiversity – def. “Biological diversity” referring to the number of different species in a given area Why do we want to preserve biodiversity? ◦ Our own survival may depend on maintaining biodiversity

4 Unknown Diversity Currently, we are aware of about 1.7 million different species living on Earth ◦ This includes, plants, animals, fungi, bacteria, etc. ◦ Most of these species are insects Scientists believe that more that 10 million species exists on Earth ◦ We have not adequately studies all the species on Earth ◦ Unknown species may exist deep in forests, in oceans and even cities

5 Levels of Diversity 1. Species diversity – the number of different species in an area ◦ this is what we think of the most when we think of biodiversity 2. Ecosystem diversity – the variety of habitats, communities and ecological processes within and between ecosystems 3. Genetic diversity – all the different genes contain within member of a population ◦ A gene is a small piece of DNA that codes for a trait

6 Importance of Biodiversity #1: Species are Connected to Ecosystems Keystone species – is a species that is so critical to the healthy functioning of an ecosystem, that removing it would cause the whole ecosystem to collapse ◦ Ex: sea otters control the kelp beds by eating urchins We may not always know how important a species is until they are all gone

9 Importance of Biodiversity #3: Medical, Industrial, Agricultural Uses Almost all of our antibiotics come from chemicals produced by fungi About ¼ of pharmaceutical drugs are derived from plants New chemicals and materials may be created by all kinds of species! ◦ We can now make plastic from plants! What are some other uses you can think of?

10 Importance of Biodiversity #4: Ethics, Aesthetics, Recreation So why else should we fight to keep biodiversity high? Many believe that all species have a right to exists regardless of their “importance” to us Other believe that all species should exists for religious reasons Other still, believe we should preserve biodiversity simply to enjoy it in nature ◦ Ecotourism is a form of tourism that supports the conservation and development of ecologically unique areas

11 Biodiversity At Risk - Objectives Ch. 10-2 1. Define and give examples of endangered and threatened species 2. Describe several ways that species are being threatened with extinction globally 3. Explain which types of threats are having the largest impact on biodiversity 4. List areas of the world that have high levels of biodiversity and many threats to species 5. Compare the amount of biodiversity in the US to that of the rest of the world

12 Current Extinctions We are in the middle of a mass extinction This one is different that past mass extinctions ◦ Humans are the Cause!! Endangered species – is a species that is likely to go extinct if protective measures are not taken immediately Threatened species – will become endangered soon if protective measures are taken. Declining numbers.

13 How do humans cause extinctions? 1. Habitat destruction and fragmentation ◦ By building homes, using land for agriculture and urban development, we are stealing habitat from animals 2. Invasive Exotic Species ◦ We are carrying species from one place to another that do not belong. The new species then outcompete the native species 3. Harvesting, Hunting and Poaching ◦ Ex: the dodo bird 4. Pollution

14 Areas of Critical Biodiversity Endemic species – a species native to and limited to one area but may be beneficial for a much greater area Areas of high biodiversity: 1.Tropical Rain Forest – cover less than 7% of the globe BUT contain more than 50% of the worlds species 2.Coral Reefs and coastal Ecosystems – the marine version of tropical rain forests 3.Islands – once formed, islands are colonized by a small group of species from the main land that evolve into new distinct species

15 Biodiversity Hotspots Biodiversity hotspot – a high-diversity area that is directly threatened Many species have already been lost in these areas due to human activity Most of these are Tropical rain forests, coastal areas and islands A few Hotspots are right here in the US! ◦ We have so many different types of ecosystems with unusual characteristics, we must take care to preserve every one ◦ Threats to our hotspots come from :  Agriculture, housing, dam construction, overuse of water, destructive recreation and mining…all because of population growth! 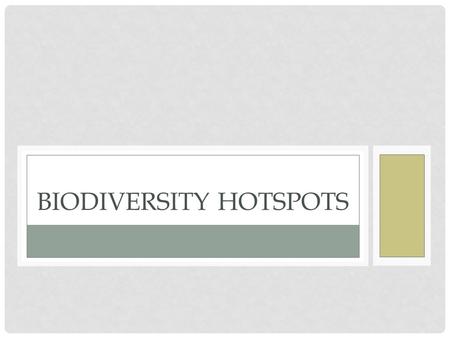