3 Types of Shots (1) Extreme Close Up (ECU): The ECU, if of an individual, typically consists of their eyes, nose, and mouth only. ECUs can also be of other objects or body parts. ECUs are the most intense, intimate shot. They should be used sparingly. Close Up (CU): Close Ups are typically of an individual’s head, or their head and upper torso. They show very little of the background. Medium Close Up (MCU): The MCU is typically used in live, on-location news interviews. These are the two-shots that show the reporter and a subject standing closely together, from the chest up.

4 Types of Shots (2) Medium Shot (MS): The MS typically shows a subject from the waist up and includes more of the background than a CU. This is a more relaxed shot than any of the close ups, and can be used to diminish tension in a scene. Medium Wide Shot (MWS): The MWS will show an individual from head to foot. There is more background seen than in a MS, but the primary focus is still the individual. Wide Shot (WS): In a wide shot, you can still see the subject of your production, but they are not the main focus of the shot. The WS clearly shows the surroundings that an individual is in. The WS can also be used for dramatic purposes (i.e. the hero riding off into the sunset). Extreme Wide Shot (EWS) No subjects are clearly visible, just the environment.

6 The Rule of Thirds

7 What is the Rule of Thirds? The Rule of Thirds is a general guideline for how to frame shots in photography, video, and film. It also can be used in other 2- dimensional artwork. The main purpose of this rule is to create interesting and aesthetically pleasing images, avoiding the natural tendency to center everything.

8 In the Rule of Thirds, you divide the shot into three equal columns and three equal rows. That grid should be used as a way to align the objects in your shot. For example: If you are shooting a landscape, the boundary between land and sky (or water and sky) should land on one of the horizontal grid lines. When your shot has a large vertical object, it should be aligned with one of the vertical grid lines. In a close-up shot, a subject's eyes should be aligned with the upper horizontal grid line. Items of importance should fall on one of the 4 points of intersection.

9 Of course, sometimes rules are made to be broken. You must use your best judgment and creativity when framing your shots.

10 Demonstrating the Rule of Thirds

24 Production Jobs – Studio Production Director The director has complete creative control over the production. Technical Director The TD operates the video switcher (Tricaster), and controls all visual aspects of the production. In our studio, they also act as the Graphics Director and Tape Operator. Audio Engineer The Audio Engineer operates the Audio Mixer, and is responsible for selecting microphones and their placement, and maintaining a good balance of voice, music, and effects. Floor Manager The Floor Manager is the voice of the director in the studio. Camera Operators (2) Audio Assistant This individual is responsible for handling audio eqipment (mics) in the studio. Lighting Director/Set Director Responsible for working with the director to design and implement the lights and set (or virtual sets). Teleprompter Operator Production Assistant On-Air Talent (1-4)

25 Production Jobs – Film-Style Production Director The director has complete creative control over the production. They are responsible for reading the script and determining the overall vision for the production. Editor The editor takes all of the footage, and edits it into a finished video that is consistent with the director’s vision. Camera Operator This individual is responsible for gathering, operating, and returning all equipment needed for a shoot. Their footage must be consistent with the vision of the director. Talent (1-2) The Critic (if needed) This individual must provide written feedback to the director regarding the successes and failures of each day in a production.

27 Basic Director Commands – Other Commands “Ready” Directors will generally give commands twice. The first time will be a warning that starts with the word “Ready.” “Places” The Director or Floor Manager will alert the cast and crew to get into their starting positions. “Quiet on the set.” Transitions from shot to shot: Fade – dissolve to/from black. Dissolve – gradual switch from shot to shot. Take – instant transition from one shot to another. Wipe – transition using a line, shape or pattern to move from shot to shot. “Mic and Cue” Alerts the Audio Engineer to open (un-mute) the mics, and the FM to cue the talent. B-Roll Prerecorded footage is played in a live production. 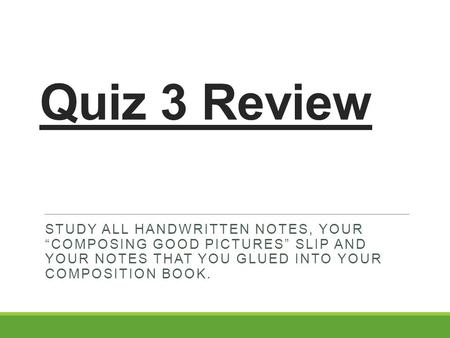 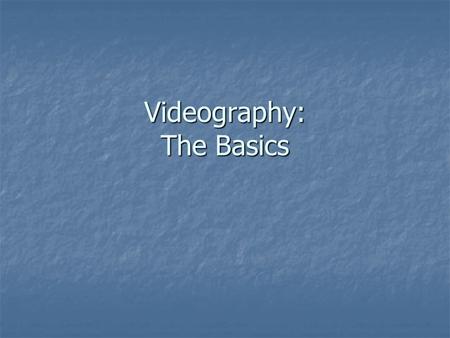 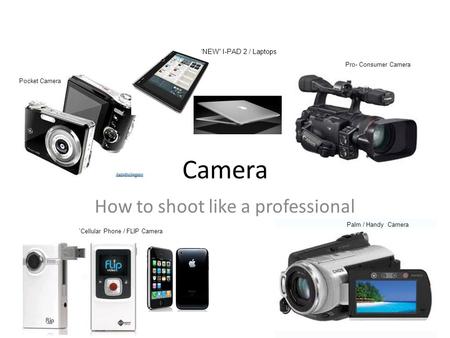 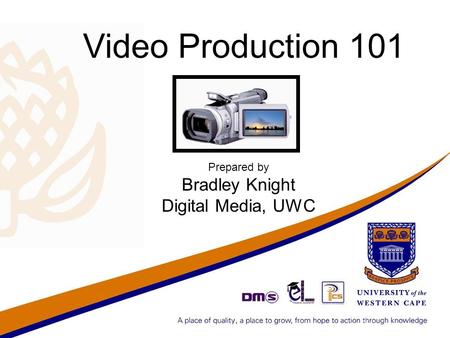 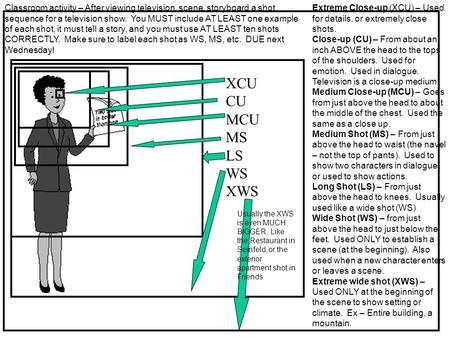 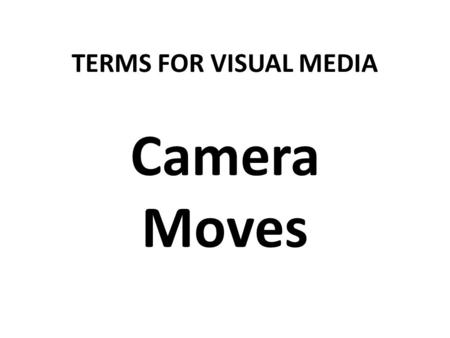 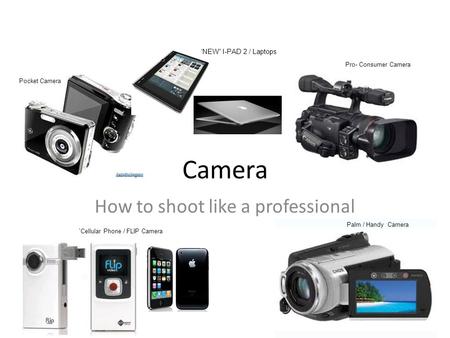 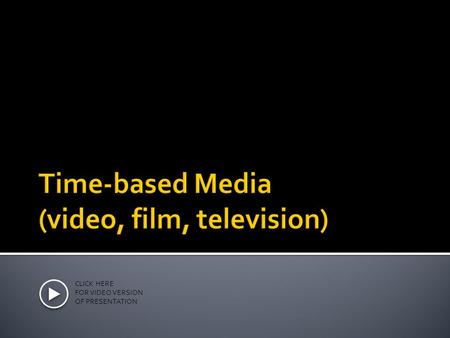 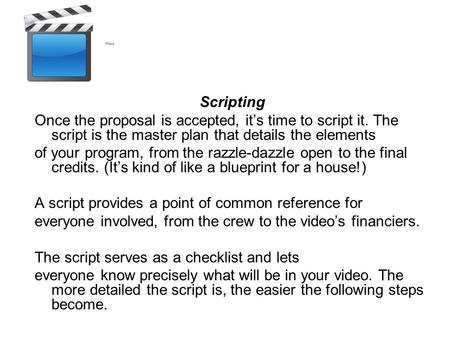 Scripting Once the proposal is accepted, it’s time to script it. The script is the master plan that details the elements of your program, from the razzle-dazzle. 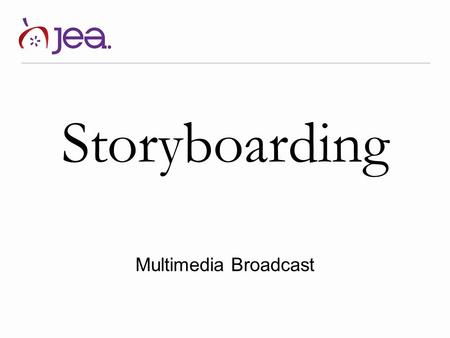 Storyboarding Multimedia Broadcast. What is a storyboard? A storyboard is a drawing that represents the idea of what you think you would like your scripted. 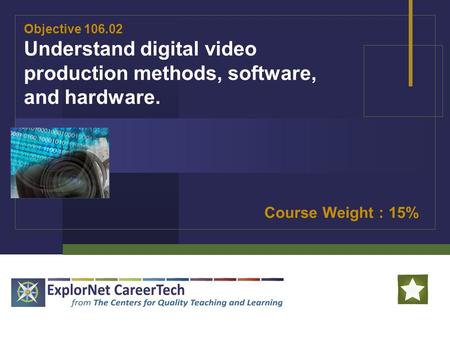 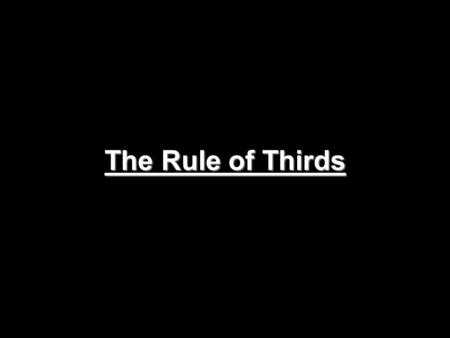