5 In 1895, Picasso moved to Barcelona with his family.

7 In October 1900, one of Picasso’s paintings was chosen for the World’s Fair in Paris.

12 So, he painted “Las demoiselles d’avignon. It had distorted faces and simplified lines. It linked tribal art and modern art. It was not accepted. He faced the painting to the wall and did not show it again for 10 years.

13 Cubism: The high point of Picasso’s originality “Ma Jolie” Cubism showed that the world is a fragmentary place. Co-created cubism with Braque.

17 The Guitar Sculpture: Inspired by his girlfriend, Eva

21 Your Cubism Project Using card stock, cut out shapes in various colors. Glue these shapes to a full piece of cardstock to form an abstract representation of an everyday item. 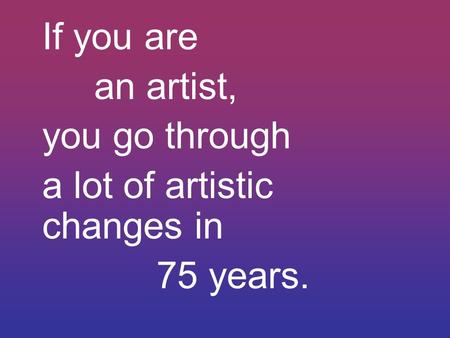