2 Geography and Early China The Big Idea Chinese civilization began with the Shang dynasty along the Huang He. Main Ideas China’s physical geography made farming possible but travel and communication difficult. Civilization began in China along the Huang He and Chang Jiang rivers. China’s first dynasties helped Chinese society develop and made many other achievements. 6.6.1 6.6.2

3 Varied Landscape China covers an area of almost 4 million square miles. The Gobi desert lies in the north. Low-lying plains in the east make up one of the world’s largest farming areas. Mountain ranges lie in the west, including the Plateau of Tibet and the Qinling Shandi. There was limited contact between people in the east and west. The weather and temperature vary from cold and dry to wet and humid, and monsoons can bring up to 250 inches of rain each year. Physical Geography

5 Farming Early Settlements Frequent flooding made the land fertile around the Chang Jiang and Huang He rivers. Along with farming, the Chinese people hunted, fished, and domesticated animals. Some small villages along the rivers grew into larger cities. Separate cultures developed in the north and the south. Over time people learned to dig wells and use potter’s wheels. Findings at burial sites suggest that the ancient Chinese believed in an afterlife and had a complex social order. Civilization Begins

7 Established by 1500 BC, the Shang was the first dynasty that there is clear evidence to support. The Shang reorganized the social order in China: the top ranking was the royals, then nobles, warriors, artisans, farmers, and slaves. Most citizens lived within the city walls. Many cultural advances were made, including China’s first writing system, complex tools, metal pots, and ornaments. Shang dynasty

8 The Zhou Dynasty and New Ideas The Big Idea Confucius and other philosophers taught ways to deal with social and political problems in ancient China. Main Ideas The Zhou dynasty expanded China but then declined. Confucius offered ideas to bring order to Chinese society. Daoism and Legalism also gained followers. 6.6.3 6.6.4

9 The Zhou people worked with other tribes to overthrow the Shang dynasty in the 1100s BC. Zhou leaders believed that their rulers were mandated by heaven, and that heaven would find another leader when necessary. A new political order was established: the king granted plots of land to lords, who in turn provided soldiers and paid taxes to the king. Poor farmers were granted land as well, and remained under the rule of the lords. The lords helped Zhou rulers keep control of the dynasty. The Zhou Political System

10 As the lords’ power grew, they became uninterested in serving Zhou rulers. Many refused to fight against Zhou enemies. In 771 BC, the Zhou suffered a loss to invaders. The dynasty survived, but morale weakened, and the Zhou began to fight among themselves. The Warring States Period marked power struggles between the ruling-class families. Problems within the government paralleled problems within large family systems, which were breaking down. Bonds of loyalty weakened within even small families, and disorder fell upon China. Decline of the Zhou Dynasty

11 The Analects Leading by Example Moral Values Disgusted with the rude and insensitive nature of the people around him, Confucius pushed for a return to ethics, or moral values. This code of ethics was passed down and written in a book. These stories focused on morality, family, society, and government. One of the major ideas Confucius put forth for the success of both family and government was leading by example. Confucius believed that when people behaved well and acted morally, they were carrying out what heaven expected of them. Confucianism

12 Daoism Daoism comes from Dao, meaning “the way.” Daoists believed that people should avoid interfering with nature or each other. Laozi wrote The Way and Its Power, a book teaching that power and wealth are unnecessary. Two Schools of Thought Legalism Legalism is the political philosophy that people need to be controlled. It is unconcerned with religion or individual thought, and prepared always for war. Legalists put their ideas into practice throughout China.

13 The Qin Dynasty The Big Idea The Qin dynasty unified China with a strong government and a system of standardization. Main Ideas The first Qin emperor created a strong but strict government. A unified China was created through Qin policies and achievements. 6.6.5

14 The Legalist Qin king Yin Zheng took the throne in 221 BC and gave himself the title Shi Huangdi, which means “first emperor.” He burned all books and writings that dealt with any practice other than Legalism. He created a strict government with harsh punishments. He used his armies to expand the empire and ensured that there would be no more revolts in the new territory. He claimed all power and took land away from the lords. Commoners were forced to work on government building projects. China was divided into districts with their own governors. Shi Huangdi

15 Politics Shi Huangdi took complete control of the land and the people. There was a strict chain of command. Taxes and building projects were introduced. Culture Shi Huangdi set up a uniform system of law. Rules and punishment, writing styles, and money were consistent across China. Unified China Finance Gold and copper coins were standardized. Uniform weights and measures help standardize trade and other legal issues.

16 Water Systems Massive government building projects gave jobs to many poor workers. New roads were built and maintained to provide easy access to and from these buildings. Canals were built to connect rivers and keep trade fast and efficient. Irrigation systems that are still in use today watered the fields and made more land good for farming. Qin Achievements Building Projects

17 The Great Wall was built to protect the country from invasion The Great Wall linked previously built walls across China’s northern frontier. The building of the wall required years of labor from hundreds of thousands of laborers. The Great Wall Of China

18 Many scholars, peasants, and nobles grew resentful of Shi Huangdi’s harsh policies and complete control. Upon the death of Shi Huangdi, the country began to unravel. Rebel groups fought among themselves, and eventually the Qin capital was burned to the ground. With no authority present, the country fell into civil war. The Fall of the Qin: The Oppressed Rise Up

19 The Han Dynasty The Big Idea The Han dynasty created a new form of government that valued family, art, and learning. Main Ideas Han dynasty government was based on the ideas of Confucius. Family life strengthened Han China. The Han made many achievements in art, literature, and learning. 6.6.6

20 Liu Bang, a peasant fighting in a rebel army, became emperor due to the Chinese belief in the mandate of heaven. He was the first emperor of the Han dynasty. Well liked by both warriors and peasants, Liu Bang released the country from strict Legalistic practices and focused on people’s immediate needs. Liu Bang lowered taxes, gave large plots of land to supporters, and set up a government that expanded on the ideas of the Qin. The Rise of a New Dynasty

21 In 140 BC, Emperor Wudi took the throne and shifted the country’s focus back to a strong central government. Confucianism became the official government philosophy. Wudi built a university that taught Confucian ideals, and awarded his officials with higher rank if they were familiar with Confucian principles. Wudi’s New Government

22 Four Social Classes under the Confucian System Upper Class: The Emperor, his court, and his scholars Second Class: The peasants, who made life work on a daily basis Third Class: The artisans, who produced items for daily life and some luxury goods Fourth Class: The merchants, who bought and sold what others made

23 Social Classes and Wealth Social rank did not reflect prosperity. Hard work and heavy labor did not reflect prosperity. A strong family was stressed so that people would obey the emperor. Men Men were the head of the household. Rulers had to obey their elders too; it was a crime to disobey. Some men gained jobs based on the respect they showed to elders. Family Life Women Women were taught to obey their husbands. Girls were not valued as highly as boys. Women could influence their sons’ families.

24 Literature The Han created realistic scenes from everyday life, advanced figure painting, and depictions of religious figures and Confucian scholars. Fu style: combination of prose and poetry Shi style: short lines of verse that could be sung The Han Chinese made paper by grinding plant fibers into a paste and then setting the paste out to dry in sheets. Later they rolled the dried pulp into scrolls. Han Achievements Invention of Paper Art

25 Seismograph A device for telling time, the sundial uses the position of the shadows cast by the sun to tell the time of day. This device measures the strength of an earthquake. Chinese scientists believed that the movement of the earth was a sign of evil times. Acupuncture is the practice of inserting needles into the skin to cure disease or relieve pain. This practice is still widely used today. Han Achievements Acupuncture Sundial

26 Han Contacts with Other Cultures The Big Idea Trade routes led to the exchange of new products and ideas among China, Rome, and other peoples. Main Ideas Farming and manufacturing grew during the Han dynasty. Trade routes linked China with the Middle East and Rome. Buddhism came to China from India and gained many followers. 6.6.7 6.6.8

28 Chinese goods became highly valued in other lands, so trade routes began opening up. Trading Chinese silk for strong Central Asian horses became a primary goal under the rule of Emperor Wudi. Central Asians could then take the silk and trade it for products in other lands. Trade Routes

29 Chinese traders only used the road until they reached Central Asia, and then gave their goods to local traders. The Silk Road China grew rich from trading silk with other lands. Travelers banded together for protection along the many miles of difficult terrain. The Silk Road was a network of routes stretching more than 4,000 miles across Asia’s deserts and mountain ranges, through the Middle East and stopping at the Mediterranean Sea.

30 Contact with New Cultures Impacts on China When the Han dynasty began to fail, people looked to old religions to find answers, but were disappointed. After coming into contact with Indian Buddhists on trade routes, many Chinese brought the teachings home to China. In hopes of relieving the suffering of human life, both rich and poor people began to embrace the teachings of the Buddha. The popularity of Buddhism in China is an example of diffusion: the spread of ideas from one culture to another. Buddhism Comes to China 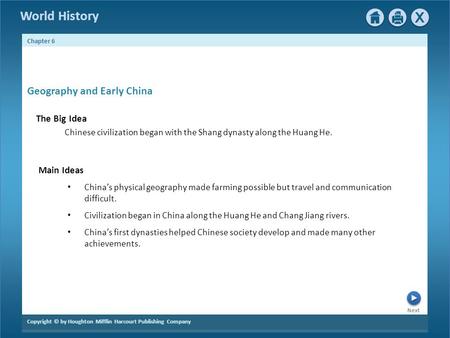 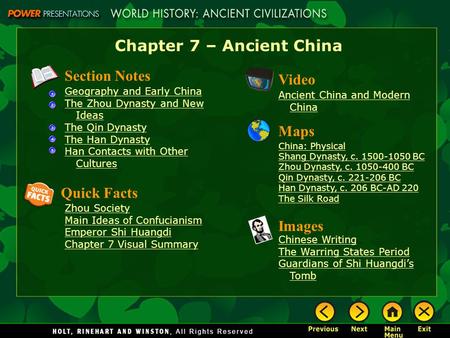