Presentation on theme: "PSYC 1000 Lecture 52. Perspectives: Defining Psychological Disorder is a “harmful dysfunction” in which behavior is judged to be: –Atypical: not enough."— Presentation transcript:

2 Perspectives: Defining Psychological Disorder is a “harmful dysfunction” in which behavior is judged to be: –Atypical: not enough in itself, and sometimes disorders widespread –Disturbing: varies with time & culture –Maladaptive: harmful –Unjustifiable: occasionally justified Standards vary with History and Culture –Sexual arousal and orgasm –Homosexuality –Hearing voices

5 Myths related to Mental Illness People with mental disorders are homicidal –No difference in reality although overrepresented in penal system –“A Statistics Canada report found that during the period from 1974 to 1992, a married woman was nine times more likely to be killed by her husband than a stranger.” http://www.cfc-cafc.gc.ca/pol- leg/res-eval/factsheets/domestic_e.asphttp://www.cfc-cafc.gc.ca/pol- leg/res-eval/factsheets/domestic_e.asp –A person with schizophrenia is more likely to be a victim rather than a perpetrator of a violent crime –More information at http://www.mss.mb.ca/concerns.htm

7 Medical Model –Diseases have physical causes and can be diagnosed, treated, and often cured –“Mental” illnesses can be diagnosed on basis of symptoms and cured through therapy, which may include treatment in psychiatric hospital –Much attention at present to identify biochemical and genetic factors that underlie mental disorders

8 The myth of mental illness? Inhumane historic treatment of the mentally ill spurred the “anti-psychiatry” movement Thomas Szasz proposed that mental illness is a myth and that what are now considered mental illnesses are simply “problems in living” Other individuals such as R. D. Laing suggested that the hallucinations and delusions that accompany schizophrenia may be beneficial and represent an “alternate” perspective on reality that is no less valid than the “normal” experience.

9 Issues? Physical vs. Psychological? –Does finding a physiological cause or correlate qualify something as a disease? –Isn’t all behaviour, at some level, physiological? Behaviour vs. physical symptoms –If increased heart rate is an indication of a cardiovascular problem is behaviour an indication of brain dysfunction? What about diseases for which there is no known cause? –Epilepsy is considered by Szasz to be a legitimate disease but had no know cause when he decided this.

10 Practical concerns Funding –Diseases receive research funding whereas “problems in living” not as much Obesity “epidemic” Stigma –Does labeling something as a disease increase or decrease stigma?

Download ppt "PSYC 1000 Lecture 52. Perspectives: Defining Psychological Disorder is a “harmful dysfunction” in which behavior is judged to be: –Atypical: not enough." 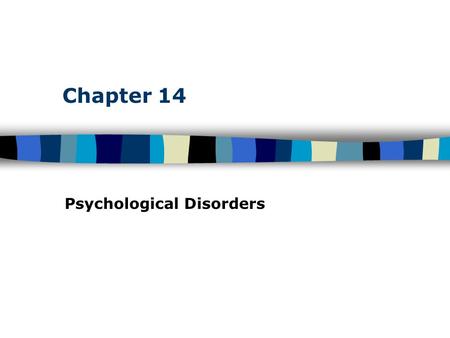