2 Science is a process of trying to understand the world around us using critical and logical thinking to evaluate results and conclusions. Scientists gather evidence and share their findings with one another. Observation: the use of our senses, computers, and other tools to gather information about the world. Ex.: Studying the interactions between gorillas by observing their behavior.

3 Observations can be recorded as data to be analyzed Qualitative data: Descriptions of phenomena that can include sights, sounds, and smells. Quantitative data: Characteristics that can be measured or counted such as mass, volume, and temperature; Numbers

4 Scientists use observations and data to form hypotheses Hypothesis: A proposed, testable answer to a scientific question. Formal hypotheses are usually written in an “if, then, because” format. If (change of IV) then (change of DV) because (why you think this will happen). If I change the light bulb then my light will work because the bulb was bad and I replaced it. If I increase my blood pressure medicine then my blood pressure should come down because I still suffered from high blood pressure.

5 How do scientists test hypotheses? The scientific method A) Observe and ask questions that lead to a problem B) Form a hypothesis C) Test the hypothesis with a controlled experiment by making observations and gathering data. D) Analyze gathered data E) Reject (start over at step B) or Accept your hypothesis. F) Form a conclusion This is what you will do every time you conduct a lab in this class!!!!!

7 Controlled experiments Only one independent variable should be changed in an experiment. Other conditions must stay the same and are called constants. Controlled experiments must have a control group – everything is the same as the experimental groups but the independent variable is not manipulated. Example: When testing blood pressure medication, control group receives none of the active ingredient. A large number of test subjects or trials is ideal.

8 Other important science terms Inference: A conclusion reached on the basis of evidence and reasoning. (Ex: you make an inference when you use clues to figure something out). Ex: Murder mystery book Law: A law that generalizes a body of observations. At the time it is made, no exceptions have been found to a law. It explains things but does not describe them; serves as the basis of scientific principles. (Ex: Law of Gravity, Newton’s Laws of motion). Theory: A proposed explanation for observations and experimental results that is supported by a wide range of evidence – may eventually be accepted by the scientific community. (Ex: Big Bang Theory, Evolution & Natural Selection) Principle: A concept based on scientific laws and axioms (rules assumed to be present, true, and valid) where general agreement is present. (Ex: Buoyancy Principle) Fact: An observation that has been repeatedly confirmed. 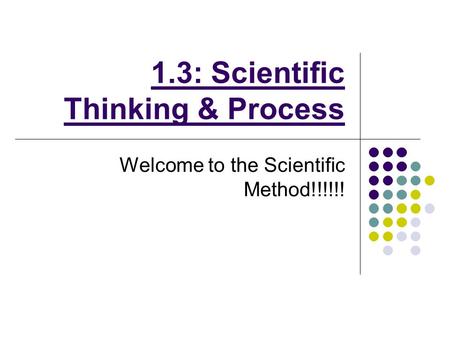