9 Checking and Balancing Judges
Adversarial System Issue between two parties settled by an impartial judge or jury Justiciable Dispute Based on an actual situation and not a hypothetical test Political Questions Disputes between Congress and the President or a matter left to a branch of government Appointments President appoints with Senate approval Impeachment House of Representatives may impeach a federal judge and the Senate tries Structure of the Courts Congress may alter the number of district or appellate courts, number of SC justices Amendments Overrule a federal court decision by amending the Constitution or bounding the courts to the supreme law of the land

11 The Supreme Court Accepting Cases
Original Jurisdiction Cases involving ambassadors, foreign ministers, consuls, or state a party Very few cases are reviewed by the SC Only a 100 out of 10,000 cases a year Lower court decision stands if SC refuses to hear case Justices may recuse themselves if conflict of interest Rule of Four Four of the nine justices must agree to hear/review a case Writ of Certiorari SC directs lower court to provide all records regarding a case when petitioned for review

13 The Supreme Court Deciding a Case
Conferences Justices discuss the case on Wednesday afternoons and Fridays Writing Opinions Most opinions written by justice’s law clerks Majority opinion The official opinion of the court, the supreme ruling Outlined by legal reasons Dissenting opinion Justices who disagree with the majority opinion write a dissent outlined by legal reasons Concurring opinion If a justice concurs with the majority but disagrees with the legal reasons 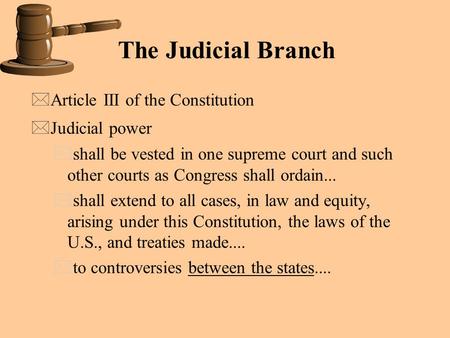 The Judicial Branch Article III of the Constitution Judicial power 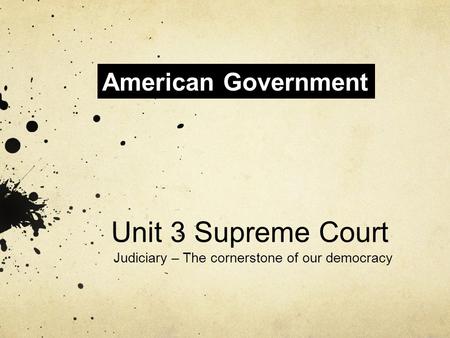 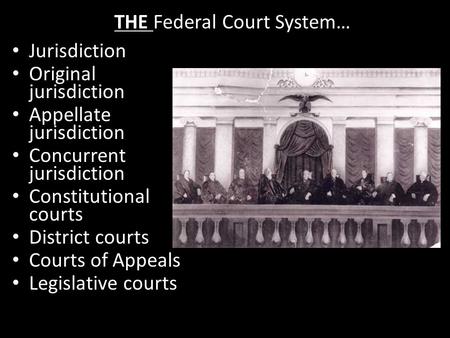