12 The Politics of Judicial Selection
The Lower Courts Senatorial Courtesy: Unwritten tradition where a judge is not confirmed if a senator of the president’s party from the state where the nominee will serve opposes the nomination. Has the effect of the president approving the Senate’s choice President has more influence on appellate level

13 The Politics of Judicial Selection
The Supreme Court President relies on attorney general and DOJ to screen candidates. 1 out of 5 nominees will not make it. Presidents with minority party support in the Senate will have more trouble. Chief Justice can be chosen from a sitting justice, or a new member.

18 The Courts as Policymakers
Accepting Cases Use the “rule of four” to choose cases. Issues a writ of certiorari to call up the case. Very few cases are actually accepted each year. Figure 16.4

19 The Courts as Policymakers
Making Decisions Oral arguments may be made in a case. Justices discuss the case. One justice will write the majority opinion (statement of legal reasoning behind a judicial decision) on the case. Figure 16.5

20 The Courts as Policymakers
Making Decisions, continued Dissenting opinions are written by justices who oppose the majority. Concurring opinions are written in support of the majority but stress a different legal basis. Stare decisis: to let the previous decision stand unchanged. Precedents: How similar past cases were decided. Original Intent: The idea that the Constitution should be viewed according to the original intent of the framers.

22 The Courts and the Policy Agenda
A Historical Review John Marshall and the Growth of Judicial Review Marbury v. Madison Judicial review: courts determine constitutionality of acts of Congress The “Nine Old Men” The Warren Court The Burger Court The Rehnquist Court

24 Understanding the Courts
What Courts Should Do: The Scope of Judicial Power Judicial restraint: judges should play a minimal policymaking role - leave the policies to the legislative branch. Judicial activism: judges should make bold policy decisions and even charting new constitutional ground. Political questions: means of the federal courts to avoid deciding some cases. Statutory construction: the judicial interpretation of an act of Congress. 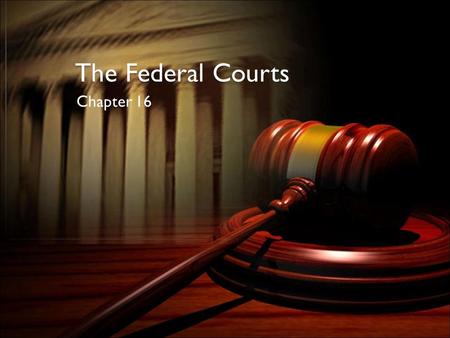