2 Do Now Section 6-3 1. List three ways in which other organisms have proved to be a benefit to humans. 2. Compare biodiversity with other natural resources, such as wood and fossil fuels. Do you think biodiversity is a renewable or a nonrenewable resource? Explain your answer. 3. What can be done to preserve the biodiversity of organisms? Go to Section:

3 Changing landscape Past and present humans have had a powerful influence on the physical and living world by modifying their environment. Our practices have changed the environment! From deforesting to fishing We used the environment for food, medicine, wood, and fiber We introduced new species, predators, agriculture, industry, and disease The world is very different from what it was long ago. Think of Earth as an island – all of the organisms that live on Earth share limited resources and increasing population sizes place greater demands on the biosphere

4 Human Activities Humans have advantages in competing with other species for limited resources (food, energy, and space) Humans are the most important source of environmental change on the planet, because we can change the flow of energy in an ecosystem and reduce the ability of ecosystems to recycle nutrients Human activities that have transformed the biosphere include: Hunting and gathering Agriculture Industry and urban development Technology

6 Resources Common resource = when an environmental resource is owned/shared by many people Any resource openly shared will eventually be destroyed because everyone will use it and no one will be responsible for preserving it Environmental resources can be classified as: Renewable = regenerate and replaceable (trees, water), but not necessarily unlimited The classification “renewable” depends upon the context in which you use it. (For example, a forest is not renewable, because the climate would change if all trees were cut down, but individual trees are renewable) Nonrenewable = cannot be replenished by natural processes (fossil fuels, coal, oil, natural gas) Sustainable use = way of using natural resources at a rate that doesn’t deplete them to make sure renewable resources are available for future generations

13 Air resources Used to breathe Negative activities:
Pollutant = harmful material that can enter the biosphere through the land/air/water Smog = mixture of chemicals that results in a gray-brown haze in the atmosphere mostly due to car exhausts and industrial emissions causing respiratory conditions Acid rain = mixture of acidic gases (nitrates and sulfates) from combustion with water vapor damaging plants, soil and water Positive activities: Clean-air regulations and controlling emissions has improved air quality

18 Value of Biodiversity Biodiversity is one of Earth’s greatest natural resources providing us with food, industrial products, and medicines (painkillers, antibiotics, heart drugs, antidepressants, and anticancer drugs) When biodiversity is lost, potential sources of material with significant value to the biosphere and to humankind may be lost.

19 Threats to Biodiversity
Human activities can reduce biodiversity by: Habitat alteration Hunting species to extinction Extinction = occurs when a species disappears from all or part of its range Endangered species = species in danger of extinction with declining population sizes As the population declines, the species loses genetic diversity, making it more vulnerable to extinction Introducing toxic compounds (pollutants) into food webs Introducing foreign species to new environments

20 Habitat Alteration When land is developed, natural habitats may be destroyed and the species that live in those habitats may vanish Habitat fragmentation = development of land that splits ecosystems into pieces resulting in biological “islands” with fewer species and smaller populations more vulnerable to further disturbances or climate changes

21 Hunting In the past, hunting for meat, fur, hides or other body parts caused the extinction of some species Today, endangered species are protected from hunting by laws in most of the world

22 Pollution Pollution can threaten biodiversity, because toxic compounds accumulate in tissue of organisms Biological magnification = increasing concentrations of harmful substances at higher trophic levels in a food chain/web Entire food web is affected, but top-level carnivores are at highest risk

25 Conserving Biodiversity
Conservation = wise management of natural resources Preservation of habitats and wildlife to protect Earth’s biodiversity for future generations, however protected areas may not be enough Current conservation efforts focus on protecting individual species as well as entire ecosystems (to ensure natural habitats and interactions among different species are preserved). “Hot spots” = places around the world where everything possible is being done to conserve the ecosystem and species

26 Our Future Since the human population is rapidly increasing, we are creating greater environmental changes. Two major concerns are: Ozone depletion Global warming

28 Global Warming A 0.5°C increase in the average temperature of the biosphere in the past 120 years (abiotic factor) Some scientists believe the rising temperature may be due to natural variations in climate Others believe it is caused by human activities adding carbon dioxide and other greenhouse gases into the atmosphere, making the atmosphere retain more heat More carbon dioxide from burning fossil fuels, cutting down trees and burning forests It may result in rising sea level causing more frequent and more severe weather disturbances Environmental changes benefit some species, but greatly disturb others that may not survive

30 Ecosystem services are provided, but it’s your responsibility to help save the Earth!
Section 6-4 Solar energy Production of oxygen Storage and recycling of nutrients Regulation of climate Purification of water and air Storage and distribution of fresh water Food production Nursery habits for wildlife Detoxification of human and industrial waste Natural pest and disease control Management of soil erosion and runoff Go to Section: 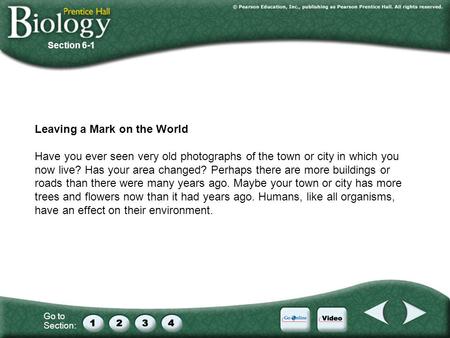 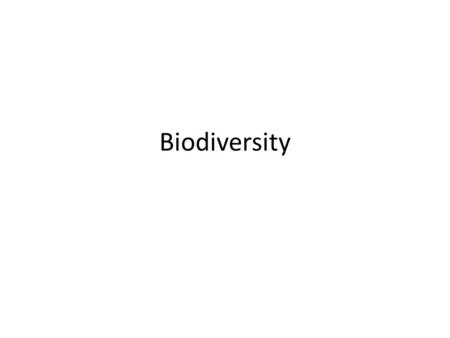