3 WDYKAKA Question #2 What did King Arthur do?

5 Why is Arthur Important?
Provided a hero to a conquered people. Think of all the invasions we’ve discussed Tales form a common bond between Anglo-Saxon and Anglo-Norman. Warrior King Arthur – Anglo-Saxon Chivalric Tradition – Anglo-Norman Second most referenced character in Western Literature.

6 Did he exist? Historical Arthur Fictional Arthur
Celtic/Anglo-Saxon Arthur Welsh chieftain warrior in the histories of may have really existed – not a king Anglo-Norman Arthur could just be a combination of great leaders Normans add chivalry, romance, quest, love, etc. Norman romances focus more on knights.

7 What is a legend? a traditional historical tale or collection of related tales popularly regarded as true, but usually contain a mixture of fact and fiction not to be confused with a myth (A traditional, typically ancient story dealing with supernatural beings, ancestors, or heroes that serves as a fundamental type in the worldview of a people, as by explaining aspects of the natural world or delineating the psychology, customs, or ideals of society)

8 Arthurian Literary Tradition
Nennius 9th century Welsh monk wrote Historia Brittonum 1st reference to an Arthur His Arthur is the “greatest of all the Celts” an important hero to the declining Celtic community.

9 Arthurian Literary Tradition
Geoffrey of Monmouth 12th century wrote Historia Regumn Britanniae one of the most important books of the Middle Ages add Merlin to the Arthurian legend tales mostly focused on Arthur with little mention of his other knights. inspired the next generation of authors

12 Arthurian Literary Tradition
Alfred, Lord Tennyson 19th century English composed many works on the Arthurian tradition: “The Lady of Shalott,” “The Death of Arthur,” “Idylls of the King” Father of the Arthurian Renaissance in Victorian England

14 Key Themes Love Triangle Arthur / Guinevere / Lancelot
Traitor/Judas Figure Mordred Lancelot Fall of the central community / end of order Grail Cup that Jesus drank out of at the Last Supper Joseph of Arimithea brought grail to England What does the grail represent? Unanswered philosophical / cosmological questions “quest” which requires much of the individual

16 Key Objects Excalibur – Arthur’s magical sword; given to him by the Lady of the Lake The Holy Grail – the cup used by Christ at the Last Supper; used by Joseph of Arimathea to catch Christ’s blood The Round Table – the table given as part of Guinevere’s dowry; the idea that everyone is equal

17 What is a Romance? A romance is an imaginative story concerned with noble heroes, chivalric codes of honor, passionate love, daring deeds, & supernatural events. In the Middle Ages in Europe, wandering storytellers would retell adventurous tales of knights and other noble heroes. These became known as romances, which, over time, moved from the oral tradition into written versions Writers of romances tend to idealize their heroes as well as the eras in which the heroes live.

18 What is a Romance? Romances typically include these motifs: adventure, quests, wicked adversaries, & magic. Motif: an idea, object, place, or statement that appears frequently throughout a piece of writing, which helps contribute to the work’s overall theme Romance hero – a knight of superhuman strength, intelligence, and virtue who follows the code of chivalry

19 What is a Romance? Exotic Setting: Romances are set in imaginary kingdoms with great castles, enchanted lakes, and forest populated with giants and monsters. Supernatural elements: sorcerers and magic spells, giants and dragons, mysterious evil forces and foreknowledge of future events---such elements all play a part in romances. Hidden identities: In a romance, others are often unaware of a character’s true identity. The truth is usually revealed at the climax of the tale.

20 Chapter 1- The Prophecies of Merlin and the Birth of Arthur
Which aspects of Arthur’s birth are similar to Beowulf? How are they different? How important is family to the development of an individual? What does the explanation of Arthur’s coming suggest about Medieval culture? What was valued? What was not? 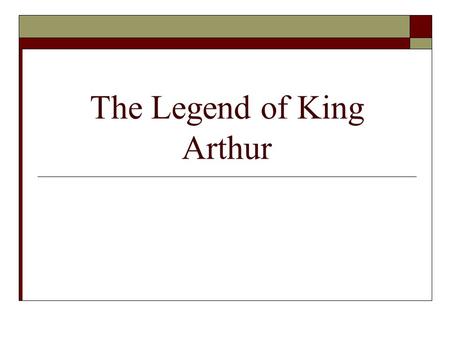 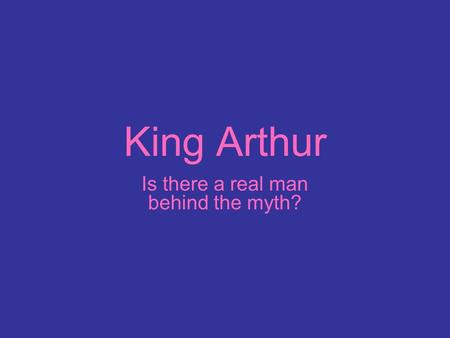