How Much do you know about Canada EH?

3 Which of the following is a constitutional responsibility of the governor general of Canada?
A) To head the Canadian Military B) To ensure that Canada has a prime minister and a government in place that has the confidence of parliament C) To provide leadership and direction to the government with support of a cabinent D) To verify all changes to the Canadian Constitution Act

5 The name “Canada” comes from the Iroquois word ‘Kanata’ which means what in English?
A) Maple leaf B) Land of the Free C) Coast D) Village

7 What challenge did Louis Riel pose to Canada?
A) He opposed confederation B) He led two armed uprisings that jeopardized canada’s expansion from sea to sea C) He allied himself to Russia D) He became an American Citizen

8 The Canadian Flag is composed of which colours?
A) Red/White/Blue B) Red/Black C) Red/Blue/ Green D) Red / White

9 Which Canadian imagined the idea for the first telephone at his summer house in canada?
A) Thomas Edison B) Alexander Graham Bell C) Mathew Evans D) Henry Woodward

10 In 1970, there was a major change to the Canadian federal election voting system. What was the change? A) Woman gained the right to vote B) Personal identification was needed C) The voting age was changed from 21 to 18 D) voting rights were extended to all inmates

11 Which Canadian province is the country's largest producer and exporter of maple syrup?
A) Ontario B) British Columbia C) Quebec D) New Brunswick

13 The Queen is represented at the federal level in Canada on a day to day basis by the_______.
A) Senator B) Member of Parliament C) Governor General D) Premier

14 What is the only officially bilingual province in Canada?
A) Alberta B) Ontario C) Quebec D) New Brunswick

15 This historic Canadian figure is known as the first prime minister of the Dominion of Canada and is also featured on the $10 bill. A) Sir Wilfred Laurier B) Sir Robert Borden C) Sir John A MacDonald D) William Lyon Mackenzie King

16 The beaver was adopted centuries ago as the symbol of which of the following organizations?
A) Calgary Stampede B) Hudson’s Bay Company C) St. Jean Baptist church D) Manitoba Legislature

18 Who was the Queen at the time of Confederation?
A) ANNE B) Elizabeth I C) Victoria D) Elizabeth II

20 Which of the following is not a Canadian invention or discovery?
A) Basketball B) Telephone C) Insulin D) Refrigeration

Download ppt "How Much do you know about Canada EH?" 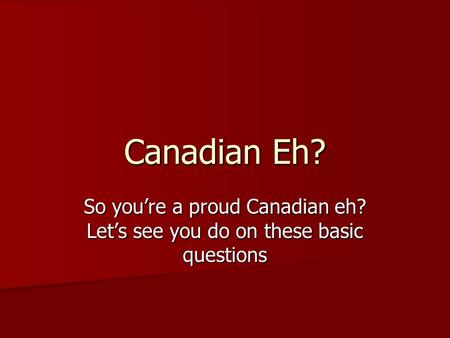 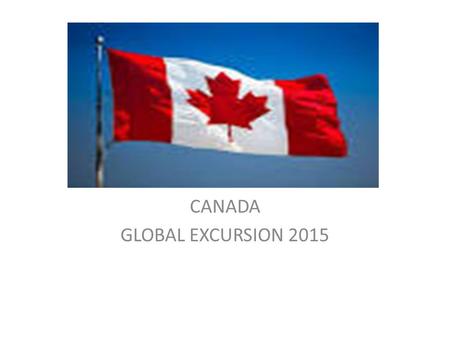 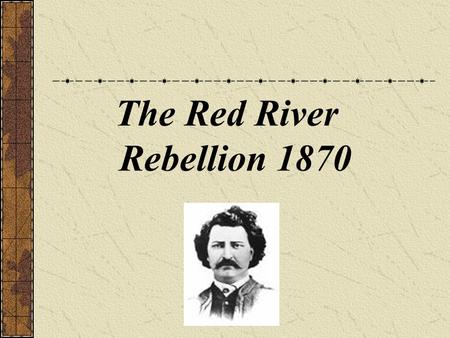 The Red River Rebellion Annexing the Northwest After Confederation, the Red River Métis were still British subjects, but they wanted to become part. 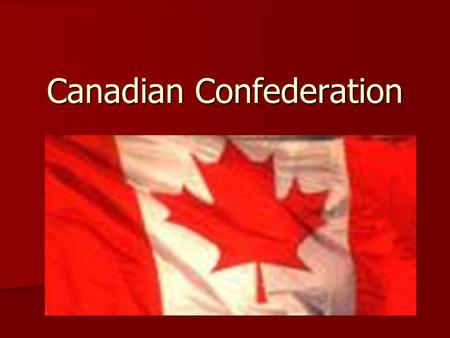 Reach for the Top Evan Sauve. Sir Wilfrid Laurier I was born on November 20 th, 1841 I was Canada’s seventh prime minister, taking over in I was. 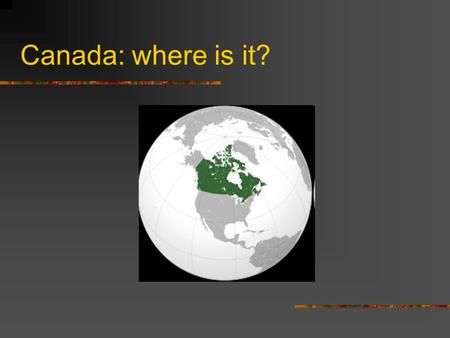 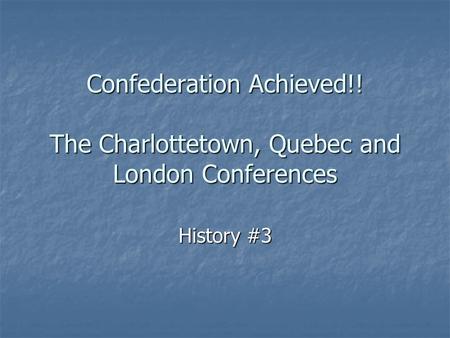 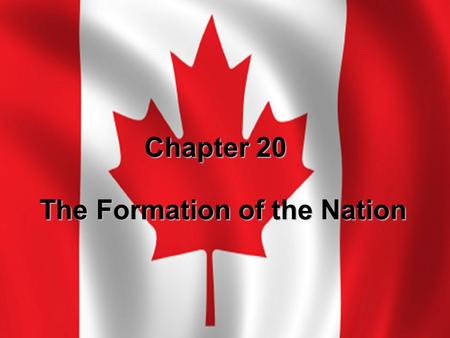 The Formation of the Nation Chapter 20. I. The European Discovery V. The Canadian Nation IV. Self-Government and Confederation III. British Canada II. 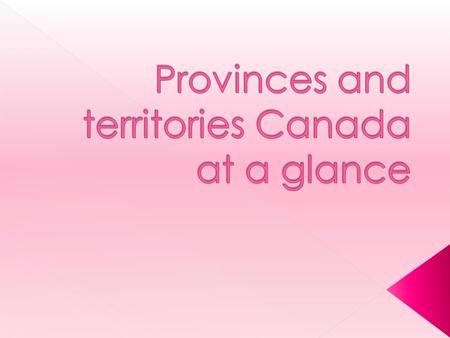 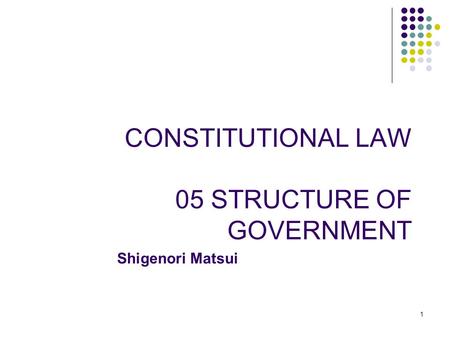 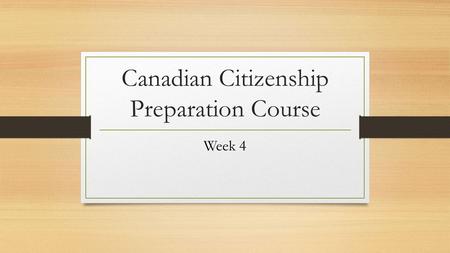 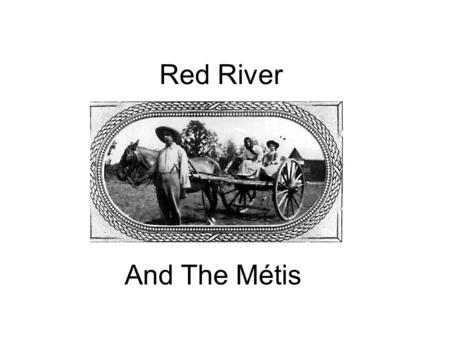 Red River And The Métis. The Events at Red River The Surveyors Arrive National Committee of the Métis The Lieutenant-Governor Arrives Forming a Provisional. 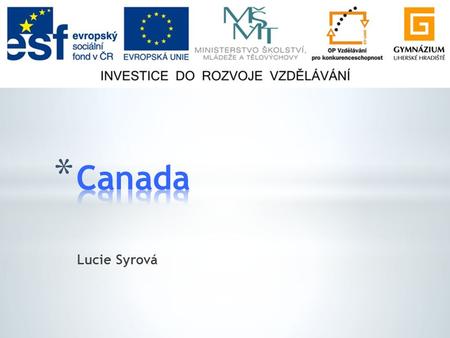 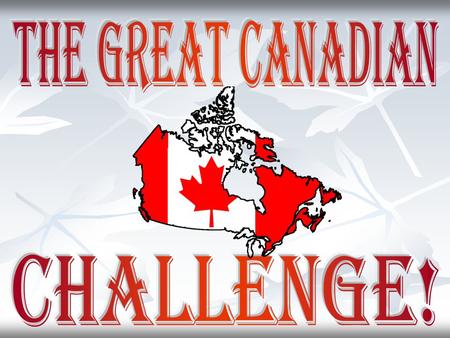 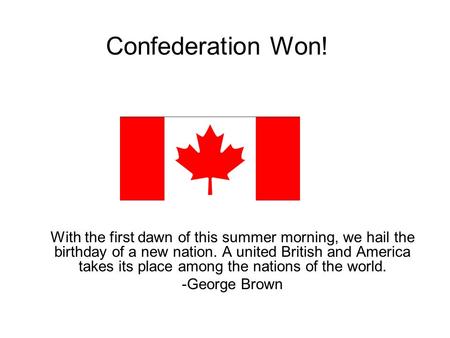 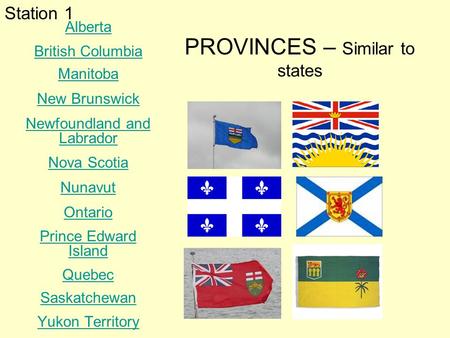