3 What is selective breeding?
Selecting the best organisms to be parents of the next generation. Why selectively breed plants or animals? Increases the value of the species as a whole. What’s an ex. of selective breeding? Cows that produce the best milk are bred together to make even better offspring.

4 Inbreeding Crossing two parents that have very similar sets of alleles. What do the offspring look like? VERY similar to their parents. What’s a goal of inbreeding? Getting the exact trait you want Ex. German Shepards. What’s the bad side of inbreeding? Increases the chances of passing on genetic disorders. Pandas often suffer from infertility and high infant death rates due to inbreeding. Often isolated from finding other mates, the Pandas will mate by inbreeding

6 Cloning Name one downfall to selective breeding.
You can’t control exactly what gets passed on. What method can you do instead that will make sure you get the exact traits you want? Cloning What is a clone? Organism that is genetically identical to the organism from which it was produced. What is a clone’s DNA like? Same genes as whatever organism it was produced from.

7 What can be cloned? Plants, animals, bacteria can be cloned
How do you clone a plant? Cutting a small piece of the plant and planting it so that it can grow full size How do you clone an animal? Nuclear transfer What is an example of this process? Dolly the sheep was the first mammal ever produced by nuclear transfer. Dolly died young at the age of 6 from a lung disease. However she was able to birth 4 lambs of her own during her lifetime.

9 Genetic Engineering What is Genetic Engineering?
Genes from one organism are moved into the DNA of another. What happens during “gene splicing?” DNA is cut open and a part of another DNA is inserted in. Why do this? Helps in making medicines, improving food and tries to cure human genetic disorders.

12 What is gene therapy? Inserting working copies of a gene directly into the cells of a person with a genetic disorder. Name an example of gene therapy at work. Copies of the DNA sequence of a protein that Cystic fibrosis patients need is inserted into a virus and then put in their breathing treatments. The hope is that the virus will multiply in the lungs and the protein will get passed on to the patients.

13 What’s unique about DNA?
No two people (except for twins) have the same DNA. You can get someone’s DNA from their skin, hair, blood, body fluids, etc…. What is DNA fingerprinting?

14 Human Genome Project What is a genome?
All the DNA in one cell of an organism. What has the Human Genome Project accomplished so far? First draft complete in 2003 (took 13 years!) Cost almost $3 billion to complete. Recognized about 30,000 genes Each gene is about 3000 bases long 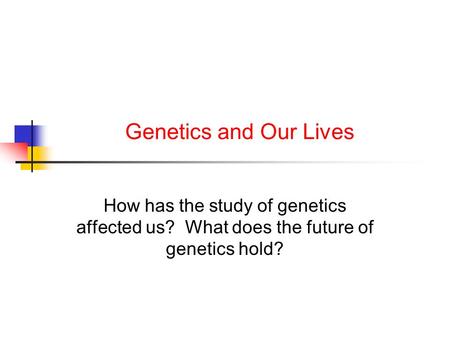 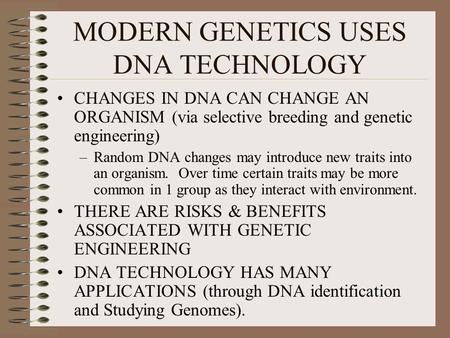