Presentation on theme: "Learning Outcomes At the end of this lesson, students should be able to: State the types of system software – Operating system – Utility system Describe."— Presentation transcript:

3 What is System Software? “A system software is a program that controls or maintains the operation of a computer and its devices.”

4 A system software serves as the interface between the user, the application software and the computer’s hardware.

6 Operating System It is a set of programs that coordinates all the activities among the computer hardware devices. In most cases, the OS is installed and resides on the computer’s hard disk. However, on ‘handheld computers and many mobile devices such as PDAs and smart phones, the OS may reside on a ROM chip. The OS that a computer uses sometimes called the platform.

9 Utility Program It is a type of system software that allows a user to perform maintenance type tasks which are usually related to managing a computer, its devices or its programs. Examples of utility program are: – antivirus, – file manager, – diagnostic utility; and – screen saver.

10 The Difference Between Operating System and Utility Program Operating SystemUtility Program An OS contains instructions that coordinate all the activities among computer hardware resources. A utility program performs maintenance- type tasks, usually related to managing a computer, its devices or its programs.

19 Mac OS It was the first commercially successful graphical user interface released in 1984. It is a closed source software and are targeted for use with home desktops and workstations.

20 Mac OS X It is a multitasking OS and it is the latest version of the Macintosh OS released in 2001. Mac OS X is targeted for use with home desktops workstations and servers. It also has better security protection compared to Mac OS, for example the integrated firewall utility.

22 UNIX It is a multitasking operating system developed in the early 1970s by scientists at the Bell Laboratories (in Murray Hill, New Jersey, United States). Some versions of UNIX have a command line interface but most versions of UNIX offer a graphical user interface.

23 LINUX Is a popular, free, UNIX-like graphical user interface operating system. It is an open source software. LINUX follows the Free Software Foundation’s radical licensing model, which provides a great deal of liberty to those that interact with Linux technology. Although Linux runs on many kinds of equipment, it is best known for its support of IBM-Intel PC- based hardware.

Download ppt "Learning Outcomes At the end of this lesson, students should be able to: State the types of system software – Operating system – Utility system Describe." 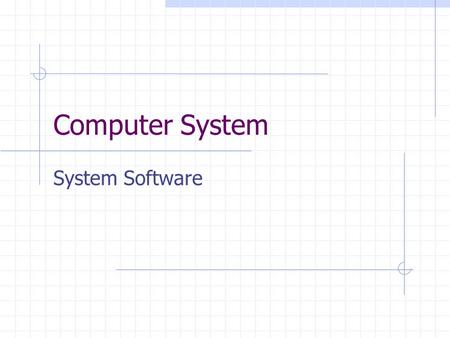 Computer System System Software. Learning Objective Students should understand the different types of systems software and their functions. Students should.