1 Parts of a Computer

2 Parts of a Computer A computer has various parts, and each part performs a specific function. These parts can be classified as input devices, output devices, CPU and memory, motherboard, expansion cards, storage devices and services, and ports and connections.

5 Keyboard A set of keys that resembles a keyboard on a typewriter. You use the keyboard to type text such as letters or numbers into the computer.

6 Microphone A device that you can use to talk to people in different parts of the world. You can record sound into a computer by using a microphone. You can also record your speech and let the computer convert it into text.

7 Scanner A device that is similar to a photocopy machine. You can use this device to transfer an exact copy of a photograph or document into a computer. A scanner reads a page and translates it into a digital format that a computer can read.

8 Webcam A device that is similar to a video camera. It allows you to capture and send live pictures to other users. For example, a Webcam allows your friends and family to see you when you are communicating with them.

9 Stylus A pointing device, similar to a pen, used to make selections and enter information by tapping on a touch sensitive surface.

10 Trackball A pointing device that is an alternative to a mouse. A trackball consists of a ball that is rotated to move the pointer on a computer screen. You can use a trackball when you have limited desk space.

12 Monitor A device that is similar to a television. It is used to display information in the form of text and graphics.

13 Printer A device that you use to transfer text and images from a computer to a paper or to another medium, such as a transparency film. You can use a printer to create a paper copy of whatever you see on your monitor.

14 Speakers and Headphones
A device that allows you to hear sounds. Speakers may either be external or built into the computer.

15 CPU and Memory The CPU is a device that interprets and runs the commands that you give to a computer. It is the control unit of a computer. The CPU is also referred to as the processor. Memory is where information is stored and retrieved by the CPU. There are three main types of memory.

16 Random Access Memory (RAM)
It is the main memory of a computer and allows you to temporarily store commands and data. The CPU reads data and commands from RAM to perform specific tasks. RAM is volatile, which means it is available only while the computer is turned on. The contents of RAM must be copied to a storage device if you want to save the data in the RAM.

17 Read Only Memory (ROM) It is the memory that retains its contents even after the computer is turned off. ROM is nonvolatile, or permanent, memory that is commonly used to store commands, such as the commands that check whether all parts of the computer are working properly before you can actually work with the computer.

18 Flash Memory It is a nonvolatile memory that retains data even after a computer is turned off. Unlike in ROM, you can erase or modify stored information.

19 Motherboard The motherboard is the main circuit board inside a computer. It has tiny electronic circuits and other components on it. The motherboard connects input, output, and processing devices together and tells the CPU how to run.

22 Hard disk A magnetic disk that is usually the main storage device on most computers. It can be an external or an internal device.

23 Floppy Disk A portable storage device that allows you to store a small amount of data. A disadvantage of this disk is that it can be easily damaged by heat, dust, or magnetic fields.

24 CD-ROM A portable storage medium that allows you to store 400 times more data than on a floppy disk. It is less prone to damage than a floppy disk.

25 DVD-ROM A portable storage medium that is similar to a CD-ROM; however, it can store larger amounts of data than a floppy disk or a CD-ROM. A DVD-ROM is commonly used to store movies and videos.

26 USB Flash Drive A small portable storage device that is typically the size of a thumb. USB flash drives have less storage capacity as compared to an external hard-drive but are more durable and easy-to-use. They can be plugged into any computer with a USB drive and as such are a very popular medium of storage.

27 Cloud Storage A modern, fast growing storage service that uses the Internet and central remote servers to maintain and store data and applications. Windows Live SkyDrive is an example of cloud storage service. SkyDrive provides enough free storage for thousands of documents and photos, has powerful permissions settings, and offers Microsoft Office Web Apps that you can access online.

28 Ports and Connections A port is a channel through which data is transferred between input/output devices and the processor. There are several types of ports that you can use to connect a computer to external devices and networks.

29 Universal Serial Bus (USB) port
You use this to connect peripheral devices such as a mouse, modem, keyboard, or printer to a computer.

30 Firewire You use this to connect devices such as a digital camera. It is faster than a USB port.

31 Network Port You use this to connect a computer to other computers to exchange information between the computers.

32 Parallel Port & Serial Port
You use these ports to connect printers and other devices to a personal computer. However, the USB port is now preferred to connect peripheral devices because it is faster and easier to use.

34 Power A motherboard and other components inside a computer use direct current (DC). A power supply takes alternating current (AC) from a wall outlet and converts it into DC power. 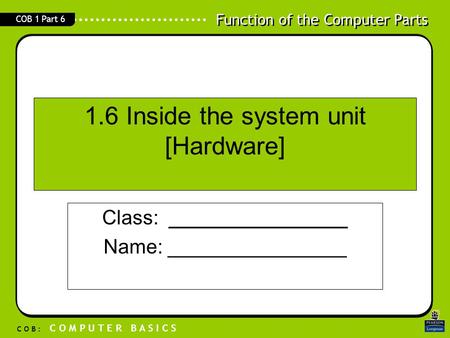