8 Are there cars parked on the sides of the road?
What color is the pickup truck driving in the road? Any minivans around? What does the blue sign say? What's the speed limit? Are there any pedestrians on the road? How observant were you??? 8

13 Scientific Method Scientists use their observations to come up with questions and use the answers to solve problems. Scientists develop and TEST ideas using a systematic, step by step approach called the scientific method. In other words, it’s a way to solve a problem.

14 Step 1: Posing Questions
Define the focus of the research Observe the world around you using all senses to gather information. Read books or other scientists’ research Make sure your question is scientific Can be answered with evidence NOT answered with an opinion

15 Step 2: Develop a hypothesis
A hypothesis is a testable, educated guess to answer your question or is a possible solution to the problem based on your research or observations Your prediction, use “I think…” Must be TESTABLE!!

16 Step 3: Design an Experiment
Parts of an experiment: Parameter: something that can be measured The parameter being tested is the manipulated variable or independent variable. This is what you are manipulating or changing on purpose The parameter that you are measuring is called the responding variable or dependent variable. It changes in response to or because of the manipulated variable

17 Step 3: Design an Experiment (cont)
The parameters that don’t change are called the controls or constants. Your control group is used for comparison. The controls DO NOT change so you can be more sure that your manipulated variable CAUSED your responding variable to change, A controlled experiment is an investigation where only ONE parameter is manipulated at a time.

18 Step 4: Collecting and Analyze Data
Data are the facts figures and other evidence gathered through observations As you collect the data you got from your experiment, write it down. Organize your data into a chart, table, or graph Use pictures or photos to explain your results Analyze your data by writing a summary of what happened in your experiment.

19 Step 5: Draw Conclusions
Do the results of your experiment support your hypothesis or not? A conclusion states whether or not the data supports the hypothesis. Do you need to revise your hypothesis and retest?

20 Step 6: Communicate your results to others
Share what you found out from your experiment Scientists make presentations and write papers so others can repeat their experiments

21 Step 6: Communicate your results to others (cont.)
Scientists use models, theories and laws to explain to people how the natural world works. Model: a picture, diagram or other representation when the real thing is not easy to see Theory: a conclusion backed up by many scientists with the same results Law: a theory that has been proven over and over again. A “rule” of nature. 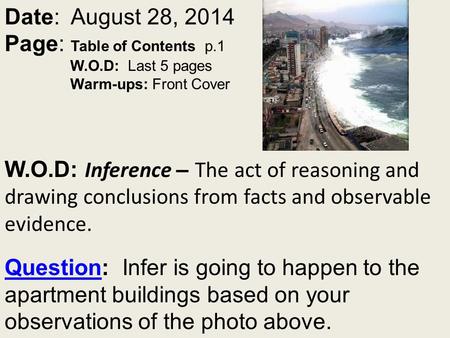 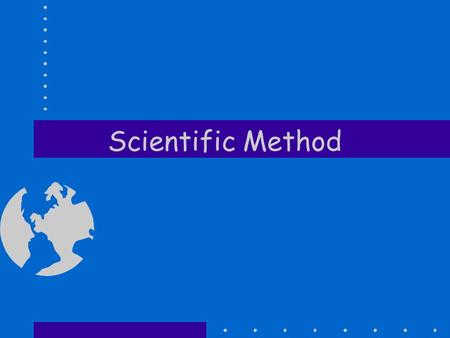 Scientific Method. Aristotle and his contemporaries believed that all problems could be solved by thinking about them. Sometimes this worked, other times.

Observations vs. Inferences “YOU CAN OBSERVE A LOT JUST BY WATCHING.” -YOGI BERRA.