Presentation on theme: " Currents are steady, smooth movements of water following a specific course.  They proceed either in a cyclical pattern or as a continuous stream."— Presentation transcript:

3  Currents are steady, smooth movements of water following a specific course.  They proceed either in a cyclical pattern or as a continuous stream.  In the Northern Hemisphere, currents generally move in a clockwise direction, while in the Southern Hemisphere they move counterclockwise because of the imposed wind stresses.

6  The water at the ocean surface is moved primarily by winds that blow in certain patterns because of the Earth’s spin and the Coriolis Effect.  Winds are able to move the top 400 meters of the ocean creating surface ocean currents.

8  In the Northern Hemisphere, the strong trade winds that originate in the northeast and blow westward pull the surface of the ocean along with them near the equator.  Thanks to the coastline and the Coriolis effect, the warm-water current then heads north, turning at about 30 degrees north latitude.  The westerlies take over then, completing the circuit. Blowing from the west, these winds guide the current eastward and south after they hit land.  The two wind patterns create a continual circular pattern of wind flowing clockwise in the Northern Hemisphere and counterclockwise in the Southern Hemisphere.

9  Trade winds - Winds that blow steadily from east to west and toward the equator over most of the Torrid Zone.  The trade winds are caused by hot air rising at the equator, with cool air moving in to take its place from the north and from the south.  Westerlies – Winds blowing from the west.

11  Benjamin Franklin – Described and mapped the Gulf Stream; “Father of Oceanography”  The Gulf Stream, a particularly strong current that is part of the North Atlantic gyre, carries warm water north from the Gulf of Mexico up the coast of the eastern United States and over to western Europe

12  As a result, lucky Floridians living on the state's east coast are cooler in summer and warmer in winter than surrounding areas, and Western Europe is much warmer than other areas at the same latitude.

14  Surface currents carry heat from place to place in the Earth system.  This affects regional climates.  Sun warms water at the equator more than it does at the high latitude polar regions.  The heat travels in surface currents to higher latitudes.  A current that brings warmth into a high latitude region will make that region’s climate less chilly.

17  Periodically, the winds that move surface water away from the shore cease to blow.  Upwelling fails, and the marine food web is disrupted.  In addition, warmer surface water creates clouds, leading to increased rainfall over the land.  This phenomenon, known as El Niño, creates situations of global consequence for many life forms.

18  El Niño - an irregularly recurring flow of unusually warm surface waters from the Pacific Ocean toward and along the western coast of South America that prevents upwelling of nutrient-rich cold deep water and that disrupts typical regional and global weather patterns.

Download ppt " Currents are steady, smooth movements of water following a specific course.  They proceed either in a cyclical pattern or as a continuous stream." 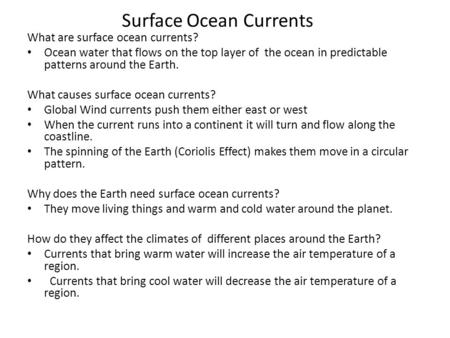 Surface Ocean Currents What are surface ocean currents? Ocean water that flows on the top layer of the ocean in predictable patterns around the Earth.