2 Climate Climate- the weather conditions of an area over a long period of time The atmosphere and ocean help regulate Earth's climate and distribute heat around the globe.

5 The Sun’s Heat The Earth is heated most directly at the equator. This causes the air at the equator to rise (low pressure). However, because the Earth is rotating it does not appear to rise vertically. Instead, it rises at a slant. This is called the Coriolis Effect.

8 Jet Streams Jet streams also affect the weather of an area. A jet stream is an area of strong winds ranging from mph that can be thousands of miles long, a couple of hundred miles across and a few miles deep. Jet streams usually sit at the boundary between the troposphere and the stratosphere. They form where temperature differences exist.

9 Jet Streams At most times in the Northern and Southern Hemispheres, there are two jet streams: a subtropical jet stream centered at about 30 degrees latitude and a polar jet stream whose position varies with the boundary between polar and temperate air. Jet streams can bring warmer or cooler air to different places throughout the year.

13 Ocean Currents The atmosphere is not the only contributor to climate. The oceans also play a major role. Consider this- England is at the same latitude as Canada, but temperatures in the UK are much more mild year round. In fact, it does not snow regularly in England as it does in Canada. What causes this difference in climate? The ocean! An ocean current is a large volume of water flowing in a certain direction. They can be horizontal or vertical, and are caused by wind and differences in temperature and density.

14 Coriolis Effect and the Ocean
Wind-driven currents are called surface currents. They carry water horizontally across the ocean’s surface by the Earth’s wind. The Coriolis Effect causes the air and water to curve to the right in the northern hemisphere, in a clockwise direction, and to the left in the southern hemisphere, in a counterclockwise direction. The shapes of continents and other land masses affect the flow and speed of currents.

15 Coriolis Effect and the Ocean
Large surface currents that move in a circular direction are called gyres. They move big bodies of warm and cool water around the world. Use the map to explain why London is warmer than Canada.

16 Gulf Stream Current Warm, water from the tropics travels along the East Coast of the U.S., across the Atlantic Ocean, and to Europe. This current is known as the Gulf Stream. It causes Europe to have more mild weather than Canada.

17 California Current The opposite is true too. The California Current brings cooler water from the Northern Pacific Ocean down to the west coast of the U.S. This causes Hawaii to be cooler than other tropical locations that are at a similar latitude.

18 East Australian Current
When you think about surface currents and gyres, think about the movie Finding Nemo. Marlin and Dori ride with Crush the sea turtles down the Australian faster. Watch the video clip from the movie:

19 Global Conveyer Belt There are also currents deep below the earth surface. Deep ocean currents are driven by differences in water’s temperature and salinity (amount of salt in the water). In the Earth's polar regions ocean water gets very cold, forming sea ice. When sea ice forms, the salt is left behind, and causes the surrounding water to get saltier. As the seawater gets saltier, its density increases, and it starts to sink. Surface water is pulled in to replace the sinking water, which begins the deep-ocean currents that create the global conveyer belt.

20 Global Conveyer Belt The conveyor belt begins on the surface of the ocean near the pole in the North Atlantic. This deep water moves south, between the continents, past the equator, and down to the ends of Africa and South America. The current travels around the edge of Antarctica, where the water cools and sinks again. As it moves around Antarctica, two sections split off the conveyor and turn northward. One section moves into the Indian Ocean, the other into the Pacific Ocean. These two sections that split off warm up and become less dense as they travel northward toward the equator, so that they rise to the surface. They then loop back southward and westward to the South Atlantic, eventually returning to the North Atlantic, where the cycle begins again.

21 Global Conveyer Belt The conveyor belt moves at much slower speeds (a few centimeters per second) than surface currents (tens to hundreds of centimeters per second). It is estimated that it takes water about 1,000 years to complete the journey along the global conveyor belt. The conveyor belt is also an important component of the global ocean nutrient and carbon dioxide cycles. Warm surface waters are depleted of nutrients and carbon dioxide, but they are enriched again as they travel through the conveyor belt as deep or bottom layers. The base of the world’s food chain depends on the cool, nutrient-rich waters that support the growth of algae and seaweed. 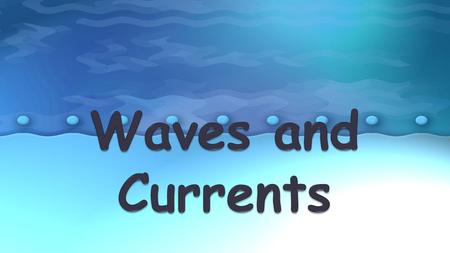