1 From gene to protein

3 DNA -mRNA-Protein = gene expression -central dogma of biology -a section of DNA's code (a gene) is copied (transcribed) onto mRNA. -mRNA carries the code to the ribosome where the code is translated, with the help of tRNA, into a sequence of amino acids (polypeptide)

5 - occurs in nucleus - purposes is to produce a copy of DNA called messenger RNA which carries genetic information to the cytoplasm.

8 - RNA polymerase moves along the DNA strand unwinding and unzipping, separating the strands by breaking the hydrogen bonds. - the mRNA strand grows. It is complementary to the DNA template

11 - triplet = 3 bases on DNA - codon= 3 bases on mRNA - codes for a specific amino acid. One of twenty possible amino acids. Redundancy built into system. 64 possible codons - universal code since it used by all organisms -stop and complete questions/ go over

12 - purpose is to translate info on mRNA into a chain of amino acids that fold into a functional protein. - one gene codes for one protein

14 - a folded strand of RNA with a site for amino acid to attach at one end. - the other end has three bases exposed which complement with an mRNA codon - called an anticodon

19 - a second tRNA with an anticodon moves into the "P" site - covalent peptide bond forms between a.a of "A" site and a.a of "P" site. -"P" site tRNA breaks away to get another a.a - ribosomal complex shifts along mRNA to next codon. Process continues, polypeptide grows

21 - elongation continues until a "stop" codon is reached - UAA, UAG, UGA - release factor ( a special protein) binds to the A site. - the polypeptide is released and the ribosome separates into the large and small subunits 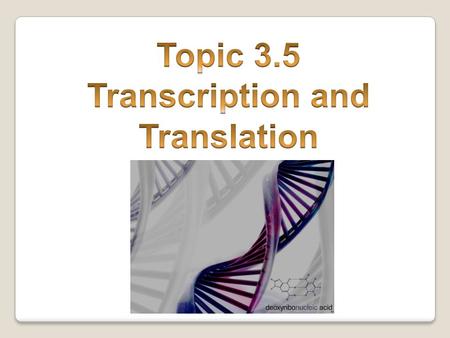 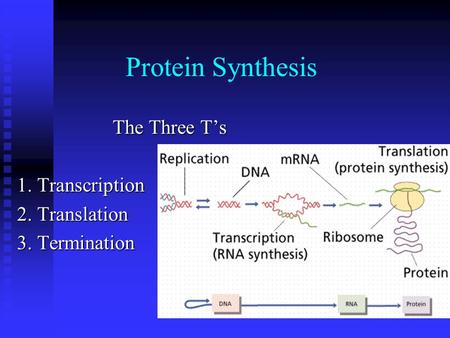 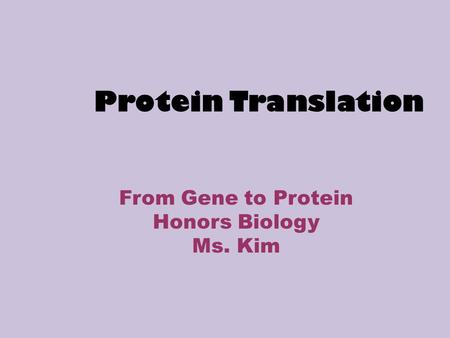 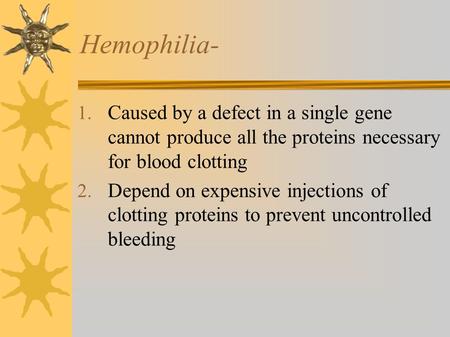 Hemophilia- Caused by a defect in a single gene cannot produce all the proteins necessary for blood clotting Depend on expensive injections of clotting.