2 Learning Outcomes B7 Demonstrate an understanding of the process of protein synthesis State roles of DNA, mRNA, tRNA and ribosomes Explain the processes of transcription and translation Determine the sequence of amino acids for a DNA sequences using a table of mRNA codons

6 The Genetic Code How many possible combinations of 3 can you make using A,T,C,G?

7 THE GENETIC CODE sequence of nucleotide bases in DNA determines the sequence of amino acids in a polypeptide Triplet code - 3 bases for one amino acid (ex. AAG,GTC, etc.) code is redundant - more than one triplet can code for the same amino acid

9 RNA How is RNA different from DNA?
3 types of RNA are involved in Protein synthesis

17 TRANSCRIPTION Takes place in the nucleus Part of DNA strand unzips
mRNA nucleotides attach to DNA strand, forming a complementary strand (enzyme – RNA polymerase) mRNA detaches from the DNA strand DNA zips back together mRNA can now carry the instructions out of the nucleus

22 Translation Takes place outside the nucleus, at ribosomes (attached to ER or free in the cytoplasm) Takes place in 3 stages: Initiation Elongation Termination

23 1. Initiation Ribosomal subunits attach to mRNA strand at the “Start” codon 2 codons of mRNA are in the ribosome at a time

25 2. Elongation As each mRNA codon binds to the ribosome, a tRNA with the complementary anticodon brings the correct amino acid As amino acids are delivered to the ribosome, they are joined by peptide bonds forming a growing chain Sequence of codons determines the primary structure Ribosome moves along the mRNA one codon at a time

27 3. Termination When the “Stop” codon is reached, the ribosome detached from the mRNA and the polypeptide is released The new polypeptide may now enter the ER for modification

30 Mass Production of Proteins
Many ribosomes may move along the same mRNA strand (polyribosome), producing many copies of the polypetide 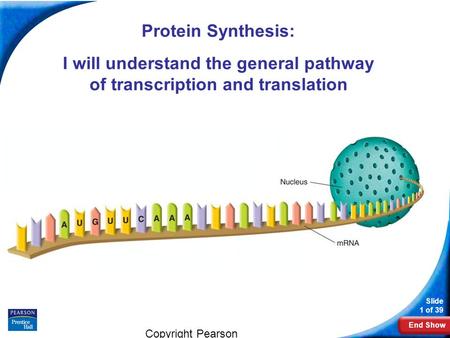 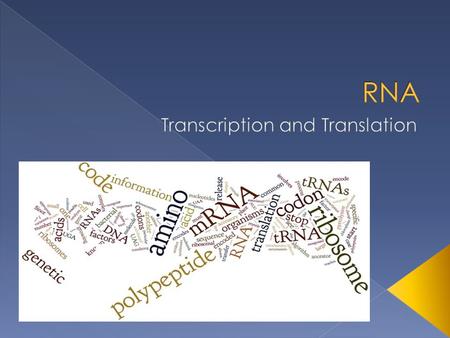 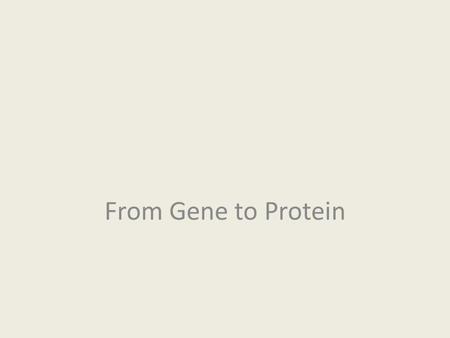