4 About seventy per cent of the surface of the Earth is covered by the oceans. More than one-fifth of the surface is covered by the Atlantic Ocean, the second largest ocean in the world. The Atlantic Ocean lies between North America and Europe in the north and Africa and South America in the south, stretching from the Arctic to the Antarctic. At its margins are seas such as the Gulf of Mexico. Waters from many of the greatest rivers of the world including the Amazon, Congo and Niger flow into the Atlantic. The average depth of the Atlantic Ocean is 3,900 meters (12,800 ft). The ocean bed is made up of hills, mountains, tablelands and valleys just as on dry land.

5 The waters of the Atlantic Ocean, like those of all the world's seas and oceans, are moved by tides and currents. The currents of the ocean follow the paths of the prevailing winds. In the North Atlantic the currents move clockwise, the most famous being the Gulf Stream which carries warm water from the Caribbean and the Gulf of Mexico up the east coast of the USA and then out across to the British Isles. In the South Atlantic the currents run counter-clockwise.

6 LIFE IN THE ATLANTIC OCEAN

7 The Atlantic is the home of a wide range of creatures. In the shallow waters of the continental shelf, before the sea bed drops away to the ocean depths there is the familiar marine life such as crabs, lobsters and shrimps, mollusks (clams, mussels, snails). On the rocks and reefs live sea anemones, sponges and corals. The shallow waters are also the home of many varieties of fish, and of eels, octopus and squid. These are fed on by creatures higher up the food chain, for example, seals and dolphins. In the deeper ocean, beyond the continental shelf, the waters are cold, and dark. At greater depths life must be able to withstand greater water pressure and survive without light. Animals living on or near the sea bed rely on food which drifts down from above or on eating smaller creatures. Microscopic organisms, known as plankton drift on the ocean currents and provide a food for creatures higher up the food chain such as whales and dolphins. 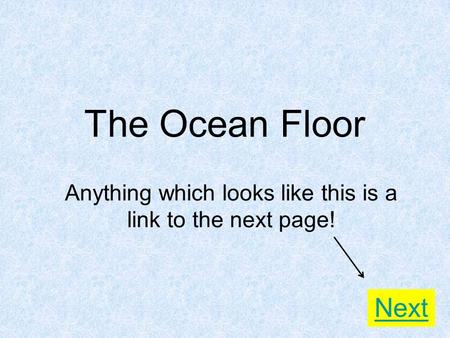 The Ocean Floor Anything which looks like this is a link to the next page! Next. 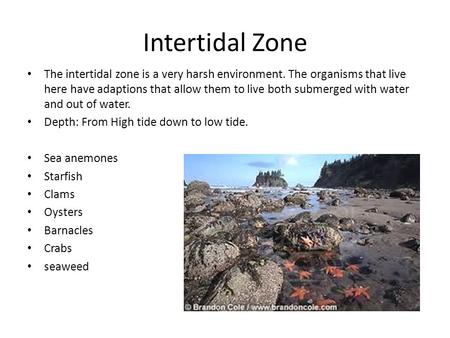 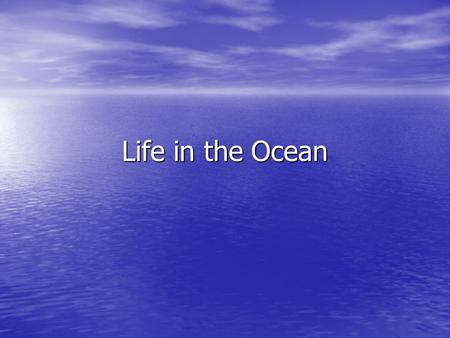 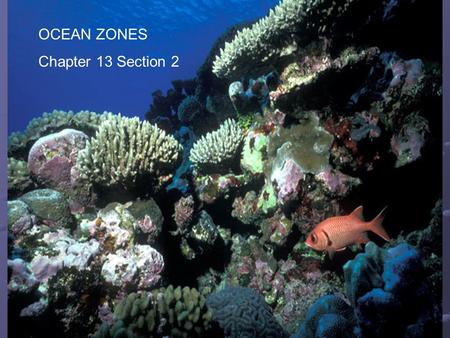 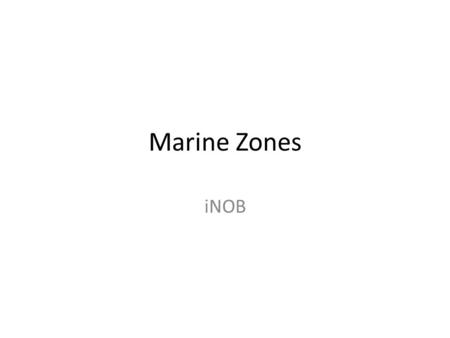 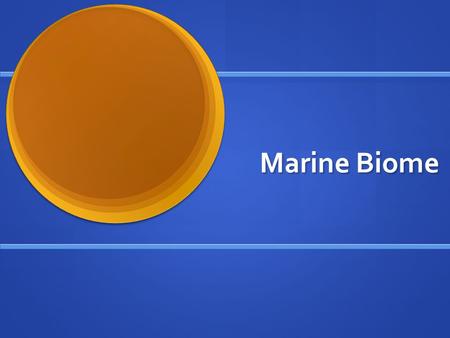 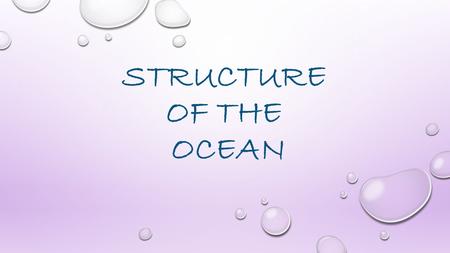 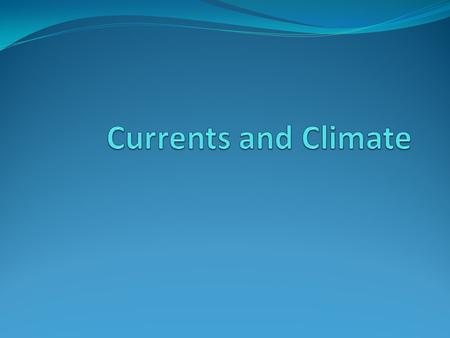 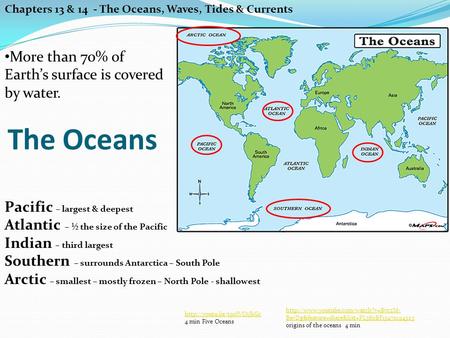 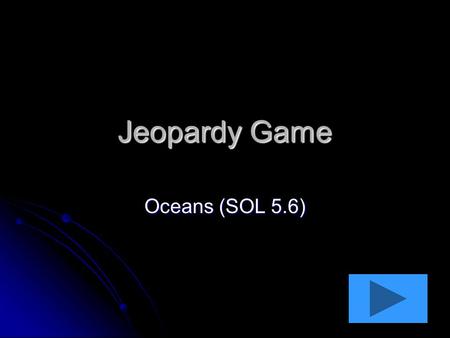 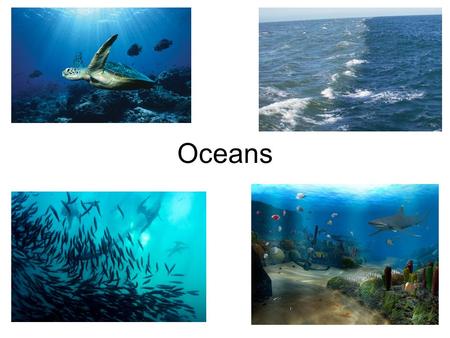 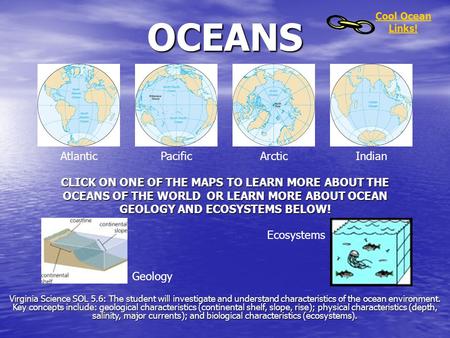 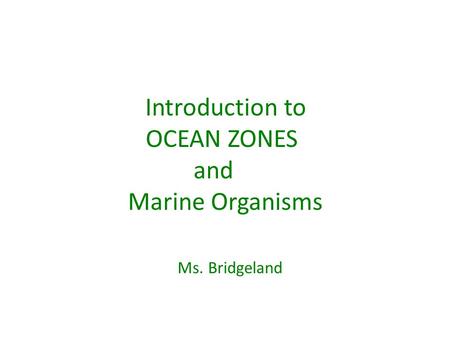 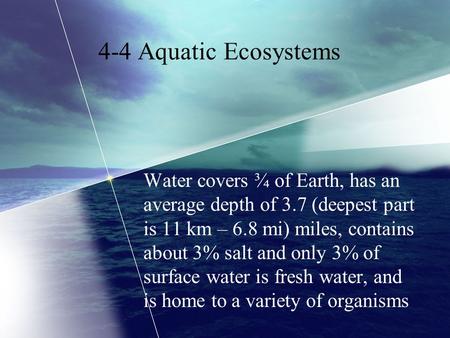 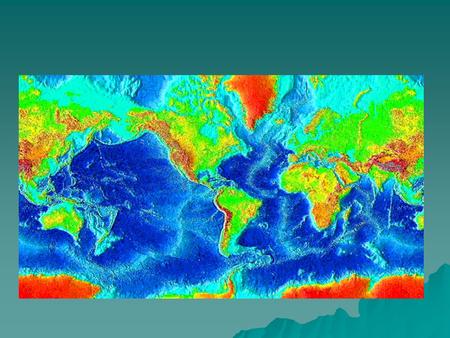 Review and New Material  Now that our class has tested… its times to move on BUT…. before we do one last review.