3 Scientists use several techniques to manipulate DNA.
Chemicals, computers, and bacteria are used to work with DNA. Scientists use these tools in genetics research and biotechnology.

7 Restriction maps show the lengths of DNA fragments.
Gel electrophoresis is used to separate DNA fragments by size. A DNA sample is cut into fragments with restriction enzymes. Electrical current pulls DNA fragments through a gel. Smaller fragments move faster and travel farther than larger fragments. Fragments of different sizes appear as bands on the gel

8 A restriction map shows the lengths of DNA fragments between restriction sites.
Only indicate size, not DNA sequence Useful in genetic engineering, studying mutations (may change lengths of fragments), or for DNA fingerprinting.

19 Bacteria frequently used in genetic engineering because they have plasmids – closed loops of DNA.
(bacterial DNA)

20 Genetic engineering produces organisms with new traits.
Gene splicing involves cutting the gene from one organism and pasting it into another organism’s DNA to give it the trait coded for by that gene. Restriction enzymes cut plasmid and foreign DNA Foreign gene inserted into plasmid

25 Cloning A clone is a genetically identical copy of a gene or an organism Cloning occurs in nature Bacteria (binary fission) Some plants (from roots) Some simple animals (budding, regeneration)

30 9.5 & 9.6 Genomics & Gene Therapy
Genomics: Is the study of genomes (all of an organisms DNA) This has provided a big step in understanding evolution. The Human Genome Project: (2003) scientists mapped and sequenced all of the DNA from a few humans to figure out our common base pairs of the entire set of chromosomes. Gene Therapy: the replacement of a defective or missing gene, or the addition of a new gene into a person's genome to treat a disease.

31 Gene Therapy: the replacement of a defective or missing gene, or the addition of a new gene into a person's genome to treat a disease. This is a promising treatment option for inherited genetic disorders & certain types of cancers, but it is still in the experimental phase. 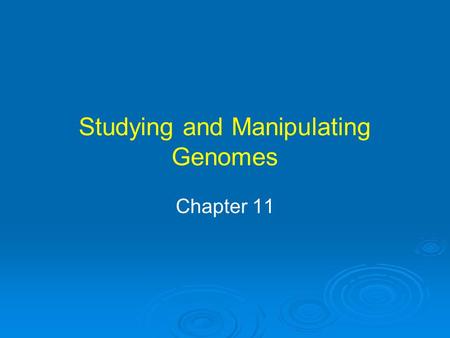 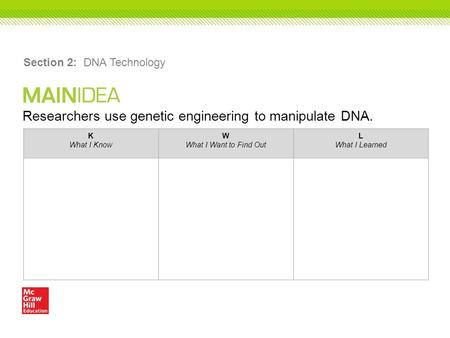 Researchers use genetic engineering to manipulate DNA. Section 2: DNA Technology K What I Know W What I Want to Find Out L What I Learned.