2 Definition of competence  Competence – right and possibility to act, conferred on an organ/institution/organisation by a Treaty or other document (i.e. state act, Constitution)

3 Division of competences  Vertical competences  who can act? Member States or European Union Various intensity: - exclusive competence - shared competence - coordinating competence They protect Member States from dominance of EU  Horizontal competences Once decided it is EU who acts  who within EU? - which institution - which procedure (involvement of Parliament guarantees greater democratisation) They guarante effectiveness of the Union’s decision-making system

5 How it was till now?  principle of conferral/ of attributed powers (art. 5 par. 1 of Treaty on European Community)  no clear catalogue of competences (possibility of implied competences, art. 308 of TEC always leaving an open door)  various intensity of competences (exclusive, shared, coordinating)  principles for exercise of competence: proportionality and subsidiarity Does anything change because of Constitution?

9 Flexibility clause  apart from catalogue – an „escape” clause art. 17 of the Draft: if action by the Union should prove necessary within the framework of the policies defined (...) to attain one of the objectives of the Constitution, and the Constitution has not provided the necessary powers, the Council of Ministers, acting unanimously on a proposal from the Commission and after consent of European Parliament, shall take the appropriate measures ? – why the catalogue, if we can escape it?

10 Exercise of Union competence  once we establish WHO acts, we have to establish HOW it will be exercised  FORM – legal act (European laws, European framework laws, European regulations, European decisions, recommendations and opinions)  PROCEDURE – more ‘democratic’ option as the basic option (art. 33 par. 1)

11 Principles to be followed at the exercise of Union competence  for all competences: proportionality ‘the content and form of EU action shall not exceed what is necessary to achieve the objectives of the Constitution’  for not-exlusive competences: subsidiarity ‘EU shall act only insofar as the objectives of the intended action cannot be sufficiently achieved by Member States (central, regional or local level), but can rather – by reason of the scale or effects of the proposed action - be better achieved by the UE’ ! new thing – control of exercise by National Parliaments!

12 What is REALLY problematic?  lack of transparency of EU action  will the catalogue of competences change it?  what else could improve it? (judicial control, control by National Parliaments, clear rules on exercise...)  what will change by factually repeating the existing schema?

13 Main challenges You need to:  avoid to block further integration  change the attitude of people towards the EU as something outside their real lives  really SIMPLIFY the system  keep the system EFFICIENT 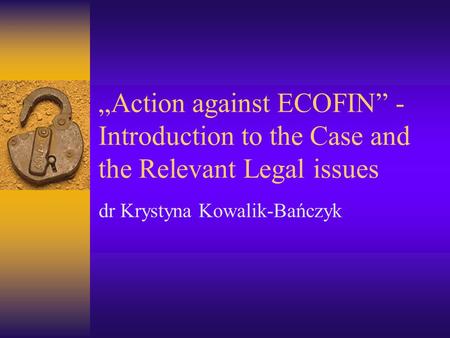 „Action against ECOFIN” - Introduction to the Case and the Relevant Legal issues dr Krystyna Kowalik-Bańczyk. 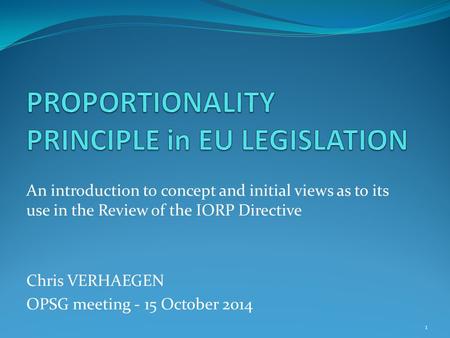 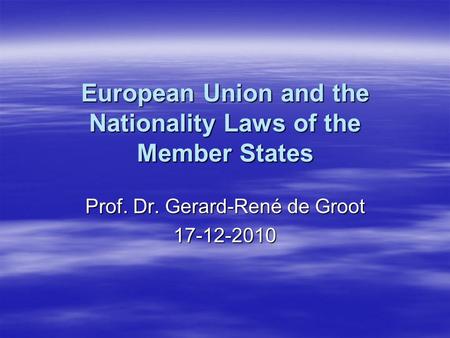 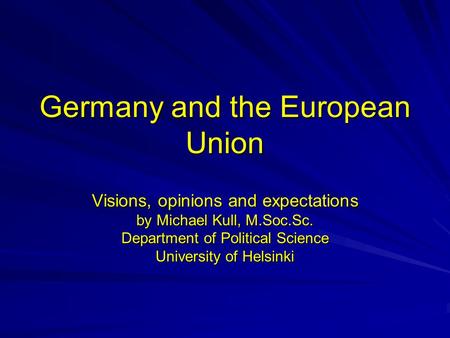