7 7 Next Steps: June –Sept 2011 The FGDC will make final adjustments to NGDA themes Status: Coordination Group (CG) has resolved comments to the list of Themes – ready for a CG vote. Associate the Data sets with the Data Themes. Associate the current inventory of National Geospatial Data Assets Themes with appropriate agencies Status: Pending finalization of the data themes/data sets list. Prepare implementation plan to agencies on how to comply with the Supplemental Guidance Status: Initial discussions and approach plan outlining have occurred with follow-on discussions being scheduled

8 8 The Geospatial Platform Definition The Geospatial Platform will be a managed portfolio of common geospatial data, services, and applications contributed and administered by authoritative sources and hosted on a shared infrastructure, for use by government agencies and partners to meet their mission needs and the broader needs of the Nation Vision All government agencies and their partners have access to geospatial capabilities to meet mission needs, ensure transparency and accountability, and geo-enable the business of government

14 14 Geospatial Standards The FGDC has endorsed the United States Thoroughfare, Landmark, and Postal Address Data Standard The Standard provides a data content, classification, quality, and exchange standard for thoroughfare, landmark, and postal addresses, and for address reference systems. Special thanks to our colleagues at the Census Bureau and URISA for their leadership and action http://www.fgdc.gov/standards/projects/FGDC-standards- projects/street-address/index_html FGDC OS produces a monthly standards update report http://www.fgdc.gov/standards

15 15 FGDC Standards Activities Standards Working Group recommended the Federal Trails Data Standard (FTDS) for endorsement at the May 10, 2011 Coordination Group (CG) meeting David Duran and Jaime Schmidt of the FTDS team took an action to confer with the person who raised the concerns, which they completed. The FTDS is now ready to be put before the CG for endorsement. http://www.fgdc.gov/standards/projects/FGDC-standards- projects/trail-data-standard/trail-data-standards

16 16 Questionnaire on Agency Use of Address Data Files To better understand the extent of duplication of expenditure of funds and needs for address information at the Federal level. Rough idea of the frequency-of-need and amount of money spent to acquire and use address information. Randy Fusaro, Census, and Jon Sperling, HUD developed the questions. Feedback was solicited and received from the CG. FGDC OS will be creating an online questionnaire to enable capture of the results (next few weeks) 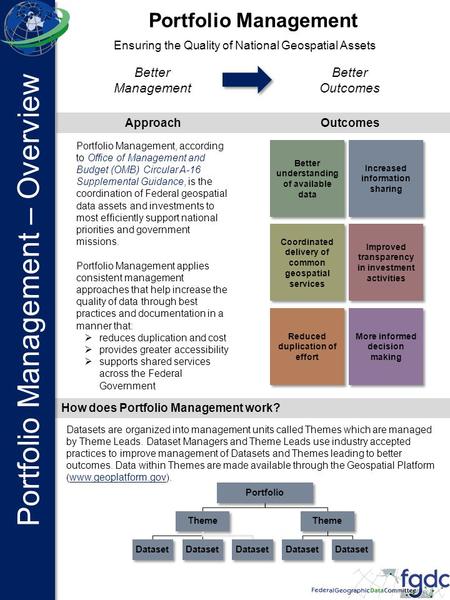 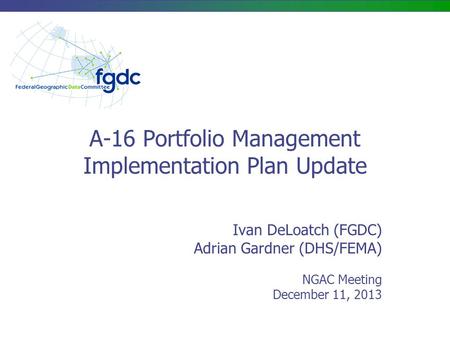 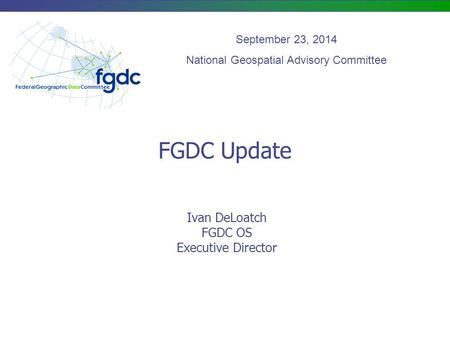 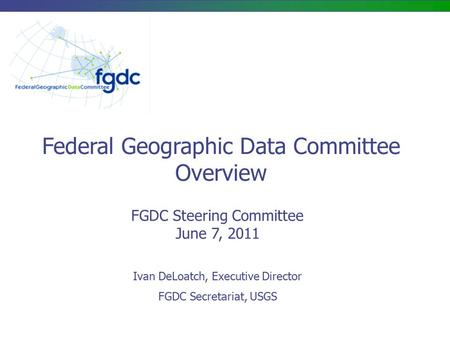 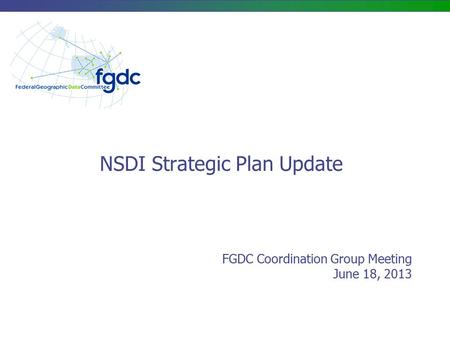 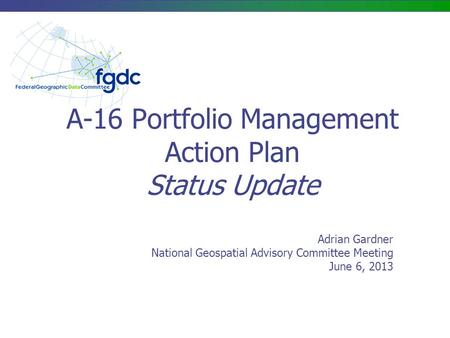 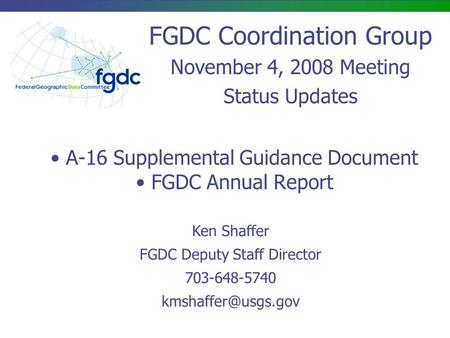 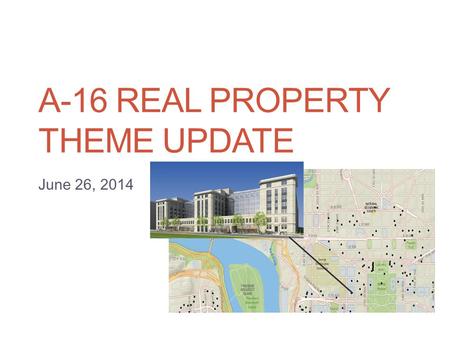 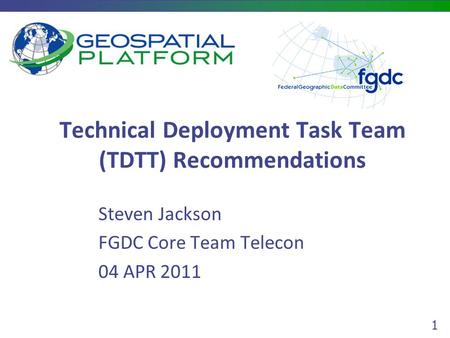 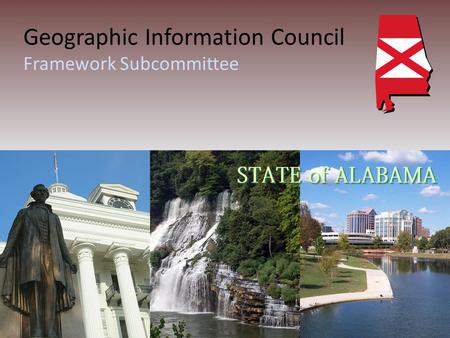 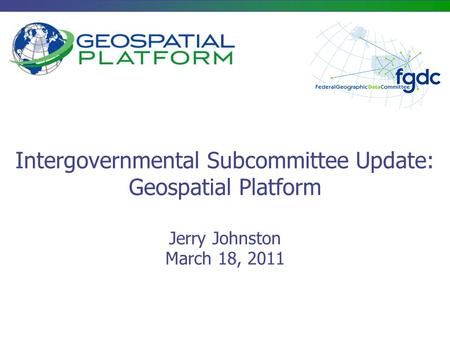 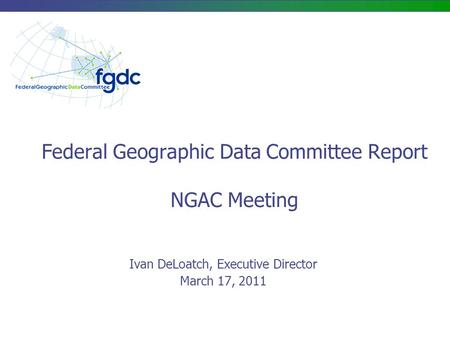 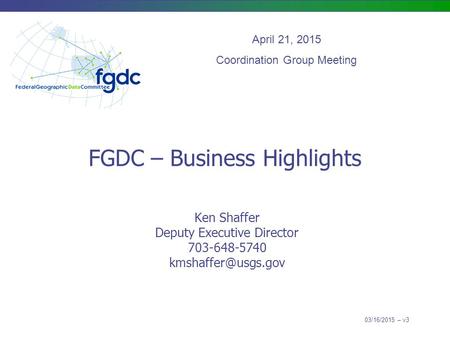 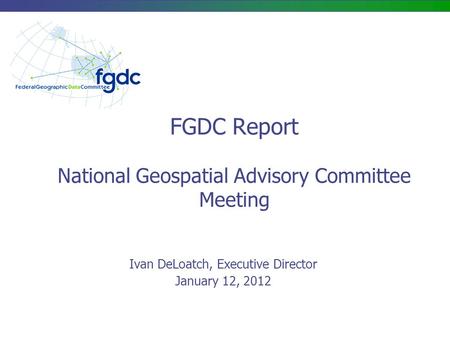 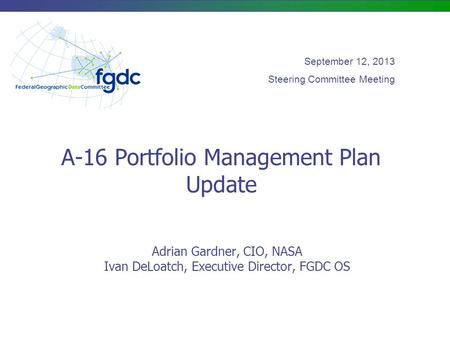 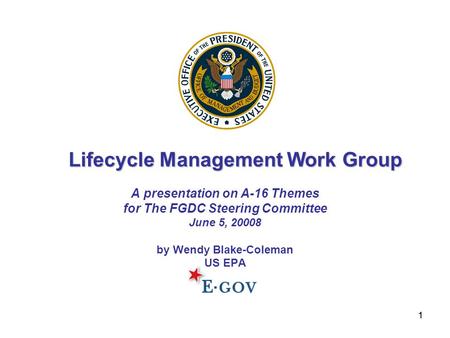 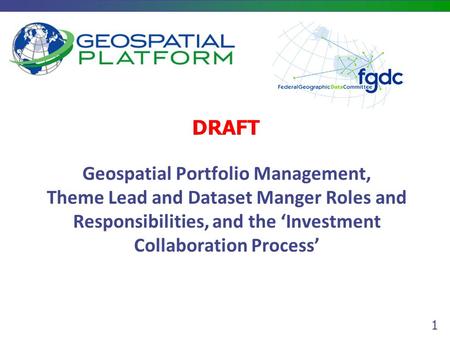 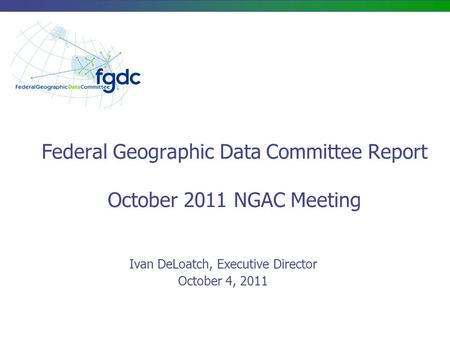 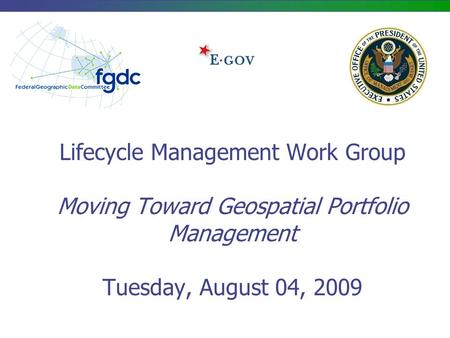 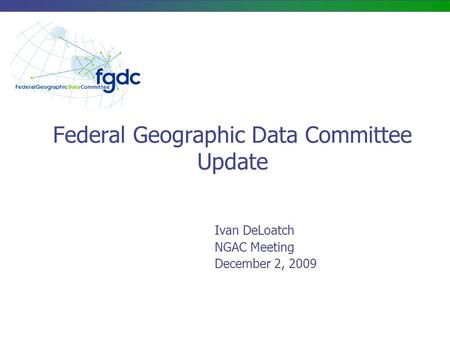