1 Politics in the Gilded Age Homework Questions
How did business influence politics during the Gilded Age? In what ways did government reform the spoils system and regulate railroads? What effect did the transition from depression to prosperity have on politics in the 1890s?

2 The Business of Politics
The Gilded Age suggests that there was a glittering layer of prosperity that covered the poverty and corruption that existed in much of society. This term was coined by Mark Twain. This table was covered in gold it is “gilded”

3 The Business of Politics
In the late 1800’s businesses operated without much government regulation. This is known as laissez-faire economics. Laissez-faire means ‘hands off’ in French. Mr. Burns loves laissez-faire

4 The Business of Politics
People liked laissez-faire in theory Also liked money when it came their way. For example, American businesses accepted land grants and subsidies. A subsidy is a payment made by the government to encourage the development of certain key industries, such as railroads. School lunches are an example of subsidies

5 The Spoils System Under the Spoils System, candidates for political office would offer potential jobs in exchange for votes. The spoils system also gave supporters access to money and political favors.

6 The Spoils System During the Gilded Age, the Republicans and Democrats had roughly the same number of supporters. To keep party members loyal, candidates rewarded supporters and tried to avoid controversial issues.

7 The Spoils System The Republicans appealed to the industrialists, bankers, and eastern farmers. They favored the gold standard, high tariffs, and the enforcement of blue laws, regulations that prohibited certain activities people considered immoral. The Democratic party attracted the less privileged groups such as northern urban immigrants, laborers, southern planters, and western farmers.

8 Reforming the Spoils System
President Rutherford B. Hayes Elected in 1877 Hayes began to reform the civil service, the government’s nonelected workers, by appointing qualified political independents instead of giving positions to supporters. He did not have the support of Congress or his own Republican party. Hayes did not seek a second term.

9 Reforming the Spoils System
President James A. Garfield Before the 1880 presidential election the Republican party was split into three factions. The Stalwarts defended the spoils system. The Half-Breeds hoped to reform the system. The Independents opposed the spoils system. Garfield wanted to reform the system. His running-mate was Chester Arthur, a Stalwart. On July 2, 1881 Garfield was assassinated by a Stalwart who wanted Arthur as president.

10 Reforming the Spoils System
After the assassination, President Arthur was able get congressional support for the Pendleton Civil Service Act. This act created a commission which classified government jobs.

11 Politics in the Gilded Age–Assessment
What did Mark Twain mean by the phrase The Gilded Age? A) Everything was wonderful because it was covered with gold. B) He supported the economics of the gold standard . C) It was a prosperous time for all people. D) There was a glittering layer of prosperity that covered the poverty and corruption that existed in much of society. What did Rutherford B. Hayes do to ensure that he wouldn’t be reelected? A) He regulated the railroad industry. B) He appointed qualified people to civil service positions. C) He supported laissez-faire economics. D) He supported the enforcement of blue laws.

12 People on the Move Homework Questions
What were the experiences of immigrants in the late 1800s and early 1900s? What different challenges did immigrants from Europe, Asia, and Mexico face? What is riding in steerage? Describe this experience.

13 The Immigrant Experience
Immigrants came to the United States fleeing crop failures, shortages of land and jobs, rising taxes, famine, and religious and political persecution. In the 1880s in Russia many Jewish people fled a wave of pogroms, or violent massacres of Jews. Red Dots show where pogroms happened

14 The Immigrant Experience
Steam-powered ships could cross the Atlantic Ocean in two or three weeks. Most immigrants traveled in steerage, a large open area beneath the ship’s deck.

15 The Immigrant Experience
Between 1865 and 1890 about 10 million immigrants arrived. Most came from northwestern and central Europe. In the 1890s, most new immigrants came from central, southern, and eastern Europe and the Middle East.

17 Immigrants from Europe
In 1892, the federal government required all new immigrants to undergo a physical exam. Immigrants with contagious diseases, such as tuberculosis, faced quarantine, a time of isolation to prevent the spread of disease.

18 Immigrants from Europe
Urban neighborhoods dominated by one ethnic or racial group of immigrants were called ghettos. Some ghettos formed because immigrants felt more comfortable living near people with the same language and traditions. Other ghettos formed from restrictive covenants, when homeowners agreed not to sell real estate to certain groups.

19 Still other ghettos formed when ethnic groups isolated themselves because of threats of violence, mostly from whites.

23 Immigrants from Asia Most immigrants who entered the United States through the West Coast were from Asia. Chinese and Japanese formed the largest groups. In the mid-1800s, American railroad companies recruited about a quarter of a million Chinese workers.

24 Immigrants from Asia Under pressure from labor unions, Congress passed the Chinese Exclusion Act in The act prohibited Chinese laborers from entering the country. It was not repealed until 1943. What did Union workers call workers that come to take their jobs? President Theodore Roosevelt made a compromise with the Japanese government. It was called the Gentlemen’s Agreement because it was not official. It called for San Francisco to end it’s policy of school segregation and for Japan to stop issuing passports to laborers.

25 Immigrants from Mexico
Employers hired Mexican laborers to work on farms, ranches, and mines. They also helped construct railroads in the southwest -When the United States entered World War I in , demand for workers increased sharply. 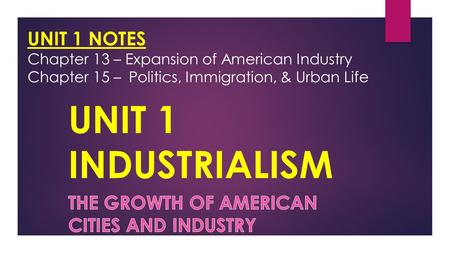 UNIT 1 INDUSTRIALISM The growth of American cities and industry 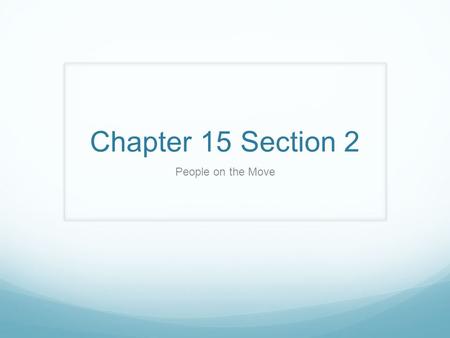 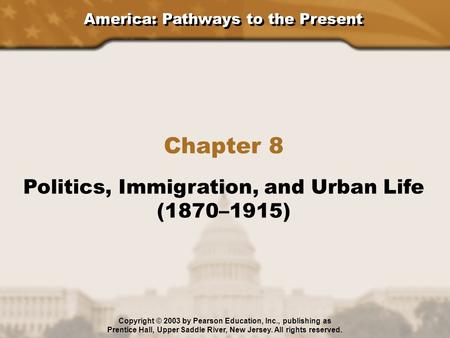 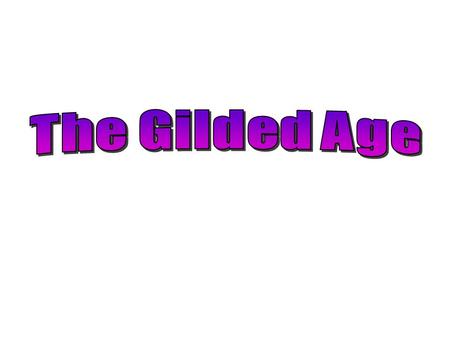 Mark Twain Phrase penned by Mark Twain as satire for the way America had become. It revealed the “best and worst” of America.  The Gilded Age suggests. 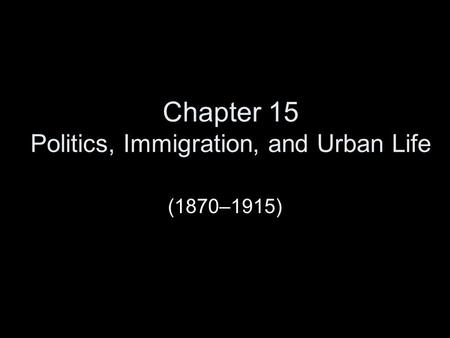 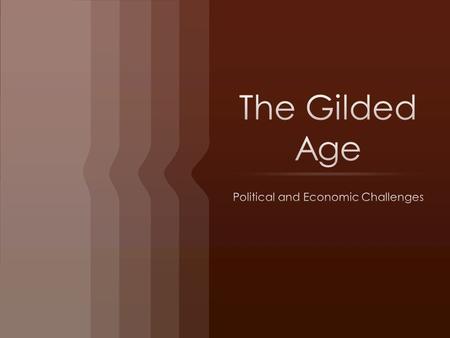 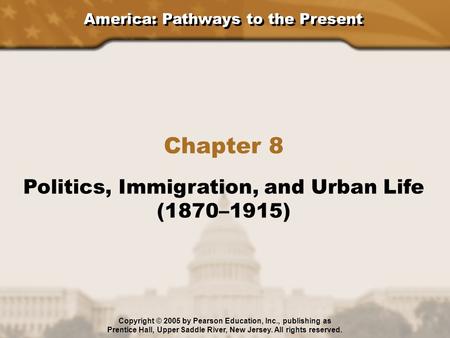 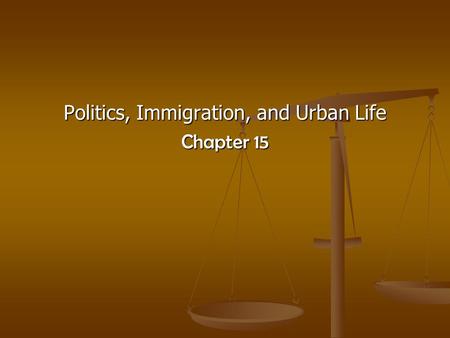 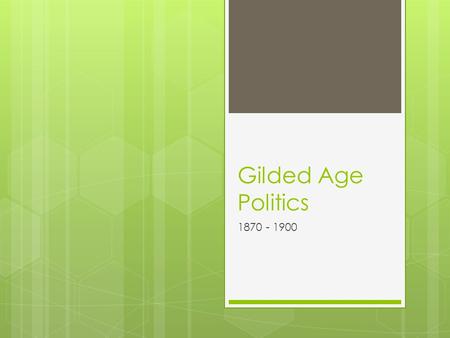 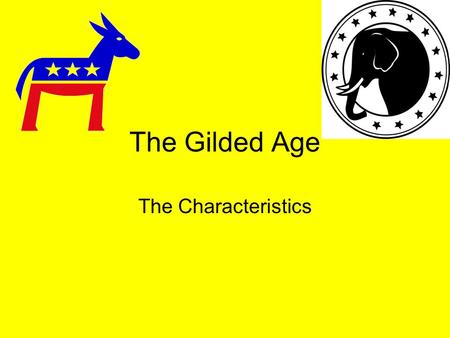 The Gilded Age The Characteristics. The Gilded Age Definition : Mark Twain called the late nineteenth century the "Gilded Age." By this, he meant that. 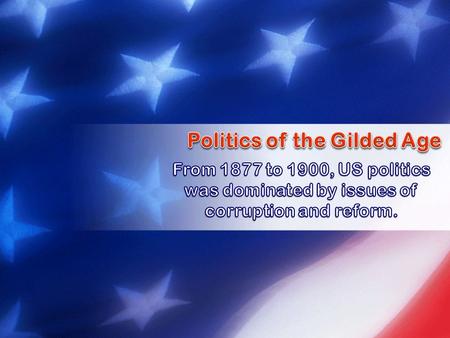 The Gilded Age suggests that there was a glittering layer of ________ that covered the poverty and __________ that existed in much of society. This term. 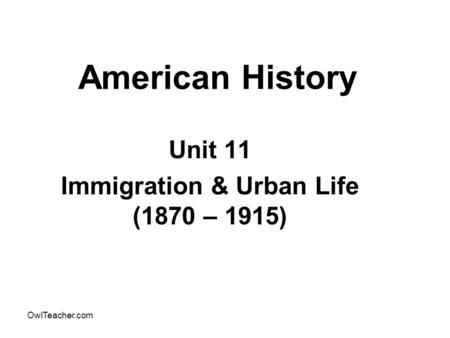 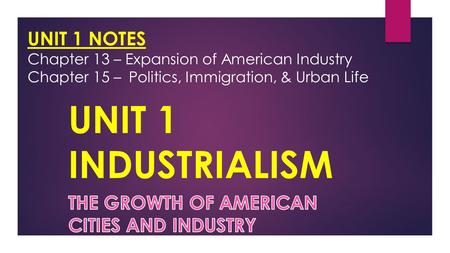