1 Ch. 2: Turbulence in the ABL and transport from surface to the atmosphere
Reading: Text, (p40-42, p49-60) Foken 2006 Key questions: What control the transport of energy, water, momentum and chemical tracers between the surface and atmosphere? How can we formulate these transports?

2 The planetary boundary layer (PBL):
The lowest 10% of the troposphere where profiles of winds, temperature, humidity and other tracers tend to be distinctively different from the atmosphere above. Turbulence plays either a dominant or important role; Depth of the PBL varies from a few hundreds meters to a few thousands meters depends on the strenght of turbulence.

3 Diurnal cycle of the PBL and its role in exchange between surface and free atmosphere:

4 Vertical Structure of the PBL:

6 Surface layer The lowest 10% of the ABL:
Turbulent driven flux is constant with height, Wind is controlled solely by turbulent momentum transport One can apply the analogy of molecular diffusion to turbulent transport. For a neutral surface layer, turbulent flux is driven by wind shear. The momentum flux in the surface layer ~ that at the surface:

7 The logarithmic velocity law of a constant-flux layer:

8 Monin-Obukhov Similar theory:
However, the surface layer is rarely neutral in reality, esp. over land. For a non-neutral surface layer, buoyancy also influences the turbulent flux in addition to wind shear: Monin & Obukhov (1954) hypothesized that any non-dimensionalized turbulence can be characterized by a non-dimensional parameter, =z/L. Where L: the Obukhov length The logarithmic law become:

9 What does L represent? The diurnal variation of the surface layer in terms of Obukhov length: When z<L, turbulence was driven mainly by wind shear When z~L: buoyancy and wind shear become comparable in driving the turbulence.

12 Concept of Richardson Number
With diffusion, the buoyancy destruction of kinetic energy is K g/Tv d [Tv] /dz while the shear generation is K (dU/dz)2 . The ratio of these two quantities is referred to as the “Richardson number” Ri. Thus by definition, where Ri = 1, destruction and generation are in balance. Ri is similar to but not the same as the parameter z and should be less that z as it uses the shear of a log wind profile that will be less for stable conditions that actual dU/dz. Also frequently used is the “bulk Richardson”, defined by using the dTv and shear dU for some finite interval dz up to the thickness of the whole boundary layer. A Richardson number greater than some values between 0.2 and 1 suppresses turbulence.

14 Surface layer Over Plant Canopies
Any land surface receives regular rainfall is almost certain to be covered by vegetation. Often vegetation is tall enough to cause significant departures from the scaling laws used for the flat uniform surface. Momentum is absorbed not just by the ground, but also through the whole depth of the canopy. Thus, the apparent original height of the logarithmic law moves to a level z=d near the top of the canopy. D is referred to as “displacement height”, usually is 70-80% of the canopy height hc. Plant canopy is biologically active with moisture and CO2. The exchange of these tracers is determined both by fast solar radiation and turbulent changes in the ABL, but also by slower biological processes, such as stomata on leaf surface which depends on soil moisture. The latter plays a dynamic role in the partitioning of radiative energy into sensible and latent fluxes.

16 How does canopy influence the flow
sweep eject Eddies break down At the scale ~ branches, leaves

18 Roughness lengths: Depends on d and drag coefficients, the ability of the canopy to absorb/emit momentum, heat and moisture. Strong drag, or CH, Cq leads to greater zo, zH and zq. Usually, zh and zq are zo/5. Canopy is far more efficient in absorbing momentum than scalars. The usual way to estimate d, zh and zq are zo are fit the equations of to the measurements of mean tracer concentration and wind speed above the canopy. At least 25% errors. d ≈ 0.75 hc over a wide range of natural canopies. 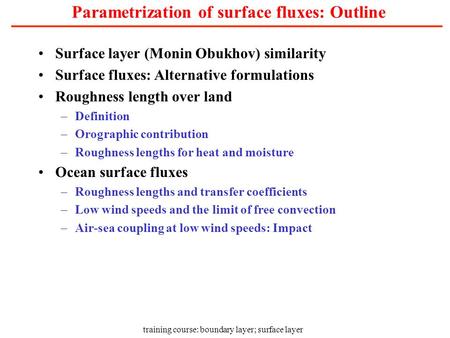 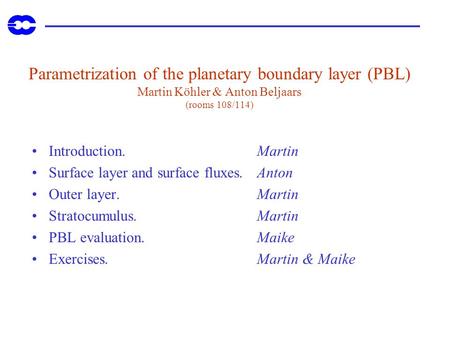 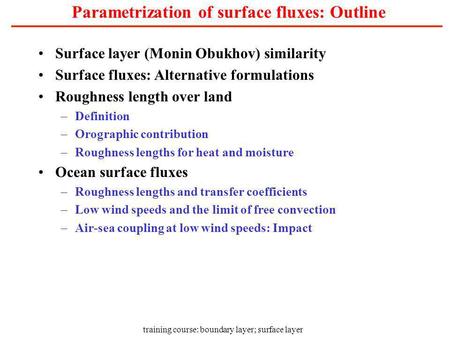 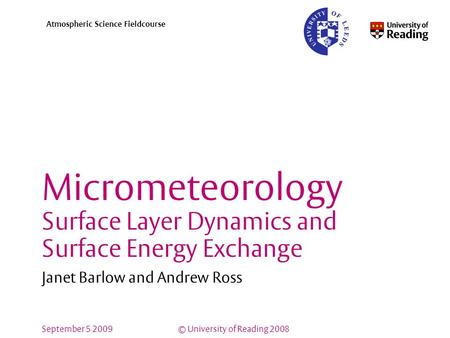 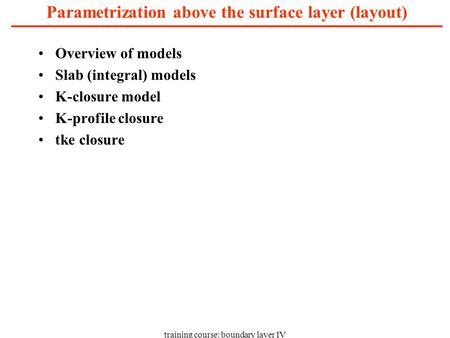 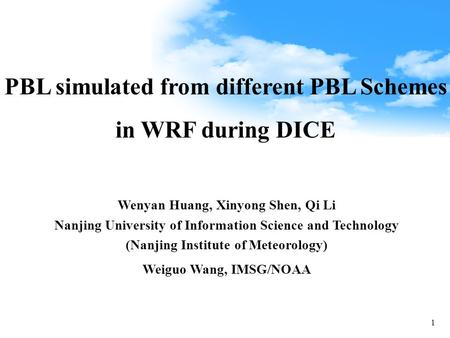 PBL simulated from different PBL Schemes in WRF during DICE 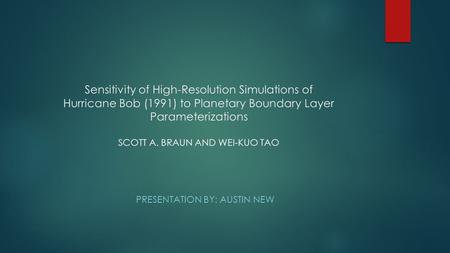 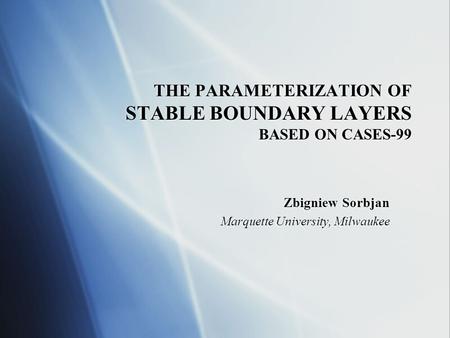 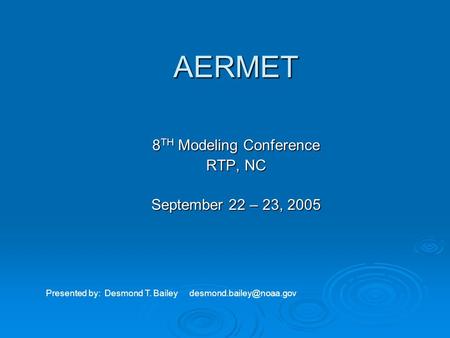 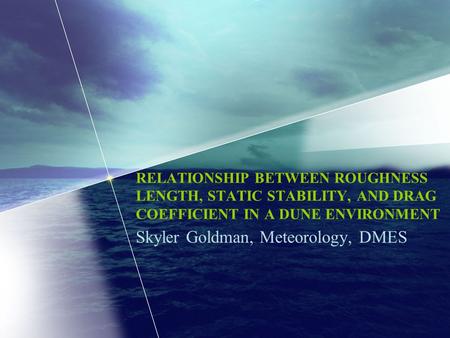 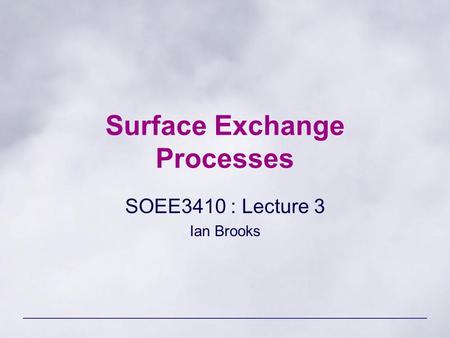 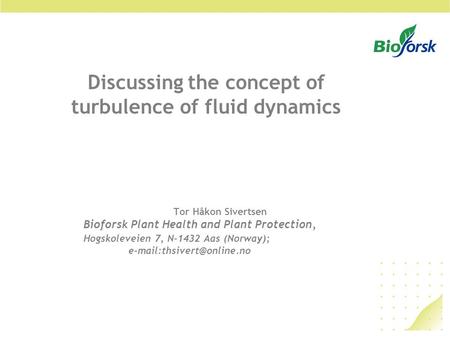 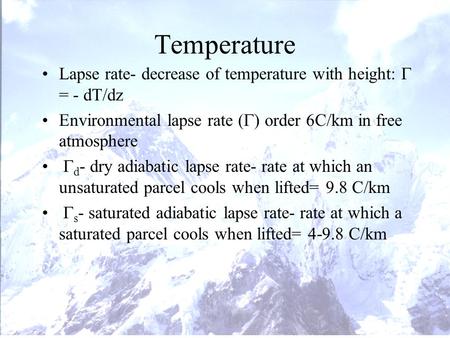 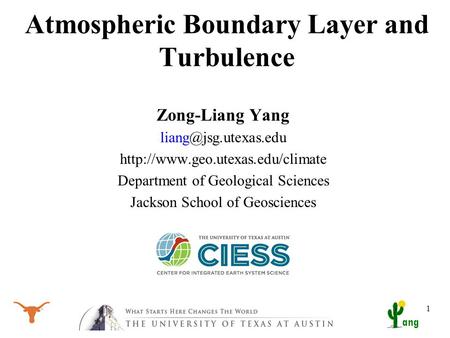