Unit 2: Climate Patterns in the Distribution of Temperatures.

Presentation on theme: "Unit 2: Climate Patterns in the Distribution of Temperatures."— Presentation transcript:

1 Unit 2: Climate Patterns in the Distribution of Temperatures

2 The Greenhouse Effect The process whereby gases in the atmosphere (carbon dioxide, water vapour, methane, and CFC’s) slow down the reradiating of energy at longer wavelengths. The energy is then retained longer, delaying its return into space. Thus the atmosphere is warmed due to the inability of heat to be re-radiated into space quickly enough.

3 The Greenhouse effect. When radiation comes from the sun only the light at short wavelengths can enter our atmosphere. Once the light is absorbed by our planet it changes into longer wavelengths, infrared. Gasses in our atmosphere (carbon dioxide, methane, water vapour, and CFC’s) absorb this light.

7 The Greenhouse Effect vs. Global Warming Naturally there is balance between the amount of energy put in by the sun and let out by earth. The Greenhouse Effect is necessary and is a very good thing. Because of our atmosphere trapping in certain levels of heat we are able to have life on our planet. However due to the increase of these gases from automobiles, factories, farming, and other sources the balance is thrown off, energy release is being delayed. The earth is warming. This is what is referred to as Global Warming. It is a result of people not being aware of how their actions are affecting the Earth in the long term.

8 Latitude and Temperature Generally it can be said that as latitude increases temperature decreases. We see that temperatures in the tropics are higher than in the subtropics, and so on having the arctic being the coldest.

9 Factors that Influence Climate Latitude: How far North or South a place is from the equator influences how warm or cool it will be. Areas closer to the poles are colder. The amount of radiation (heat) an area receives depends on the angle of the suns rays. At the equator the suns rays are straight covering a smaller area At higher latitudes the same amount of radiation must cover a larger area. The energy gets spread out.

11 Latitude vs Temp Graph Construct a scatter plot graph of the following data to see the relationship between Latitude and temperature Hint: Start your X-Axis at -60 then go across by intervals of 20 degrees of latitude. Use Temperature on your Y-Axis.

13 What Season Is It In The Northern Hemisphere?

14 What Season Is It In the Northern Hemisphere

15 Why Is It that the Southern Hemisphere Seems More Moderate? The southern hemisphere has much more water. Water holds more heat, thus stays warmer longer.

Download ppt "Unit 2: Climate Patterns in the Distribution of Temperatures." 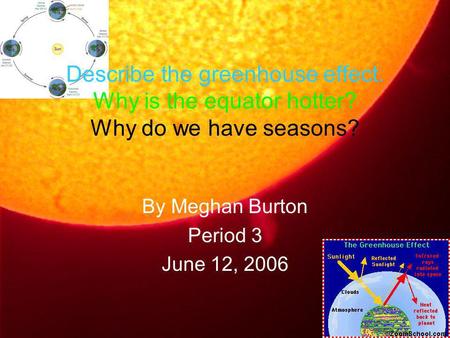 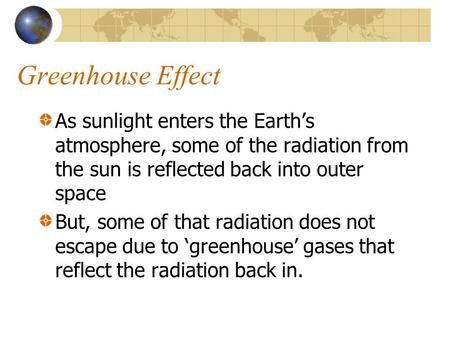 Greenhouse Effect As sunlight enters the Earth’s atmosphere, some of the radiation from the sun is reflected back into outer space But, some of that radiation. 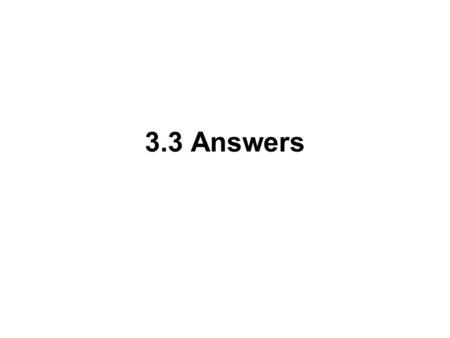 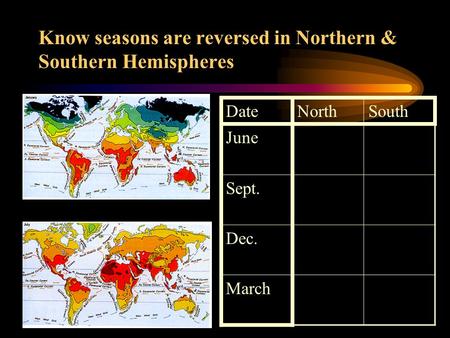 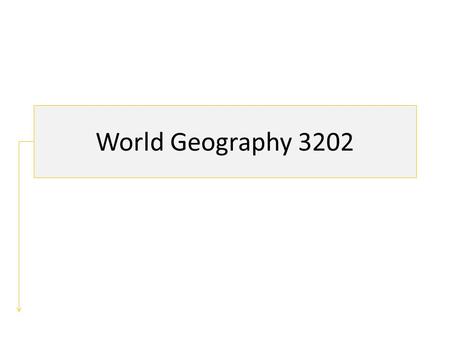