3 Albert Bandura was born in a small Canadian town located approximately 50 miles from Edmonton. The last of six children, Bandura's early education consisted of one small school with only two teachers.

4 Albert Bandura soon became fascinated by psychology after enrolling at the University of British Columbia. After graduating in just three years, Bandura went on to graduate school at the University of Iowa. While the program took an interest in social learning theory, Bandura felt that it was too focused on behaviorist explanations.

5 After graduating, he participated in a clinical internship with the Wichita Kansas Guidance Center. In 1953, he accepted a teaching position at Stanford University, which he still holds today. Later on, the American Psychological Association elected him to its presidency.

7  The experiment is important because it sparked many more studies about the effects that viewing violence had on children. Especially studies in to the effects of playing violent video games on young children and how it may effect their behavior in later life.

8  The subjects studied in the experiment involved 36 boys and 36 girls from the Stanford University Nursery School ranging in age between 3 and 6. The total of 72 children were split in to 3 groups of 24. 2 groups would be put into an aggressive model scenario with 1 group in a same-sex adult model and one group in a different-sex adult model. The final group would be used as a control group and would be exposed to a non-aggressive model scenario.

9  For the experiment each child was exposed to the scenario individually so as not to be influenced or distracted by classmates. The first part of the experiment involved bringing a child and the adult model into a playroom. In the playroom, the child was seated in one corner filled with highly appealing activities such as stickers and the adult model was seated in another corner containing a toy set, a mallet, and an inflatable Bobo doll. Before leaving the room, the experimenter explained to the child that the toys in the adult corner were only for the adult to play with.

10  After a minute of playing with the toy set, the adult in the aggressive model scenario would attack the Bobo doll by hitting it. The mallet was also used to continually hit the Bobo doll on the head. After a period of about 10 minutes, the experimenter came back into the room, dismissed the adult model, and took the child into another playroom. The non-aggressive adult model simply played with the small toys for the entire 10 minute-period. In this situation, the Bobo doll was completely ignored by the model then the child was taken out of the room.

11  The final stage of the experiment took place in a room in which the child was left alone for 20 minutes with a series of aggressive and non- aggressive toys to play with. A Bobo doll, a mallet, dart guns, and tether ball with a face painted on it were among the aggressive toys to choose from. The nonaggressive toys the children could choose from were a tea set, paper and crayons, a ball, two dolls, cars and trucks, and plastic farm animals. Judges watched each child behind a one-way mirror and evaluated the subject based on various measures of aggressive behavior.

12  The first measure recorded was based on physical aggression. This included punching or kicking the Bobo doll, sitting on the Bobo doll, hitting it with a mallet, and tossing it around the room. Verbal aggression was the second measure. The judges counted each time the children imitated the aggressive adult model and recorded their results.

17  This experiment showed that males are drastically more inclined to physically aggressive behaviours than females. Bandura explains that in our society, aggression is considered to be a distinct male trait. Because of this, boys are raised to be more aggressive it is therefore more acceptable when males exhibit this trait. Girls, not confident of displaying physical aggression, almost matched the boys in Bandura's experiments in terms of verbal aggression.  The experiment suffers from a methodological shortcoming: The sole purpose of a Bobo doll is to bounce back up when knocked over; to act as a target. Therefore, the children in the experiment were likely to hit the target Bobo doll for fun because this is what it is designed for, not because they feel aggressive or are imitating aggressive behaviour.

18  Methodological Issues: -The experiment lacked realism (Not ecologically valid) -The children's behaviour could have been a result of demand characteristics.

19  At 82 years young, Professor Bandura continues to research and teach at Stanford University, and he still travels a world eager to convey on him numerous measures of recognition and respect for his accomplishments. "As I reflect on my journey to this octogenarian milepost," he wrote, "I am reminded of the saying that it is not the miles traveled but the amount of tread remaining that is important. When I last checked, I still have too much tread left to gear down or to conclude this engaging Odyssey." Indeed. 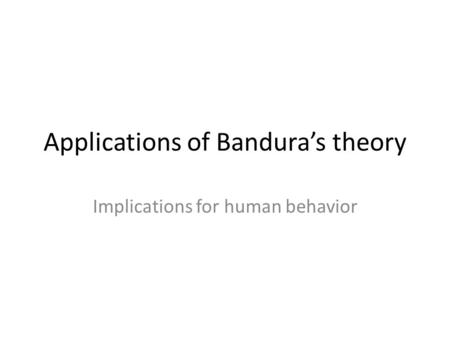 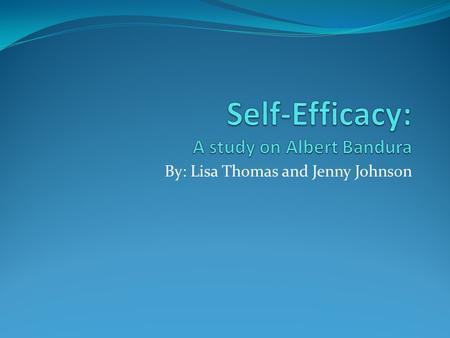 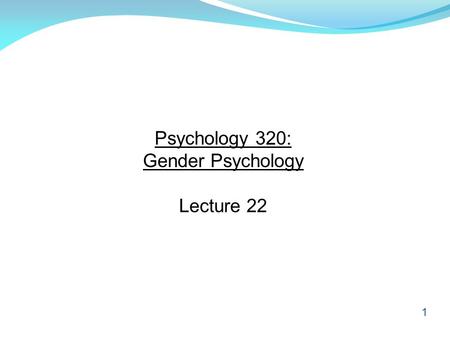 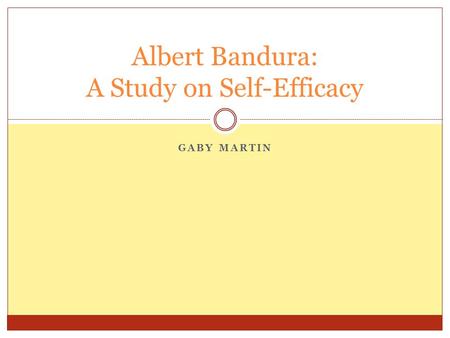