2 The Election of 1824 The U.S had one political party, which were the Jeffersonian Republicans. James Monroe finished his second term, but decided not to run for third. Four candidates of the Republican party competed for presidency. They are: Andrew Jackson William H. Crawford Henry Clay

3 Striking a Bargain John Quincy Adams, son of John Adams, met with Henry Clay. Clay agreed to use his influence as Speaker of the House to help Adams become president, while he became secretary of state. Adams won the election and became president. Followers of Jackson claimed that they made a “corrupt bargain” and stealing the election. Clay and Adams struck a bargain.

4 The Adams Presidency The “corrupt bargain” had cast a shadow over Adams’s presidency. He wanted a stronger navy and government funds for scientific expedition. Also he wanted the federal government to direct economic growth. These ideas horrified those who wanted a more limited government, so Congress turned down many of his proposals. John Quincy Adams

6 Jackson Triumphs Jackson won the election by a landslide. He received many votes in the South, where his support for states’ rights was popular. He won 56 percent of the popular vote and 178 electoral vote.

7 Jackson as President Jackson was everything most Americans liked– a patriot, a self-made man, and a war hero. On March 4, 1829, thousands of farmers, laborers, and other ordinary Americans crowded in Washington to hear Jackson’s Inaugural Address.

8 “Old Hickory” Andrew Jackson grew up in a log cabin. He fought in the American Revolution as a young patriot. Before he was 30, he was elected to Congress from Tennessee. He gained fame during the War of 1812 by winning the Battle of Horseshoe Bend and the Battle of New Orleans. His troops called him “Old Hickory” because he was as tough as a hickory stick.

9 New Voters President Jackson promised “equal protection and equal benefits” for all Americans– at least for all white American men. At first, only white Americans with properties can vote. Now they allow white American men vote. States have less limited suffrage. Women still could not vote and African Americans and Native Americans had few rights. Voters

10 The Spoils-System It was a system that had become a bureaucracy, a system that non-elected officials carried out laws. Since the Jacksonians won the election their benefits were to handout government jobs to supporters.

11 Electoral Changes Jackson’s supporters abandoned the caucus system. He replaced with nominating convention in which delegates from the states selected the party’s presidential candidate. The Democrats held their first national party convention in 1832 in Baltimore, Maryland. The convention drew delegates from each state in the Union. Jackson won the nomination. This system allowed many people to participate in voting.

12 The Tariff Debate Many different parts of the country disagreed strongly on some issues like the tariff. In 1828 Congress passed a very high tariff on manufactured goods from Europe. Manufactures–mostly in the Northeast–welcomed the tariff. The South hated the new tariff. They called it the Tariff of Abominations.

13 The South Protests Calhoun opposed the tariff and argued that since the federal government was a creation of the states that they are the final authority of the laws. The alternative to state sovereignty is to allow the supreme court or congress to tell what the constitution means and what orders we must obey. They want to nullify the tariff. John C. Calhoun

14 The Webster-Hayne Debate Senator Daniel Webster delivered a stinging attack on nullification. He challenged a speech given by Robert Hayne. Hayne had defended an idea that the states had the right to nullify acts of the federal government and even to secede. Webster defended the Constitution and the Union. He argued that nullification would end the Union. He ended with the statement “Liberty and union, now and forever, one and inseparable!” Daniel Webster

15 Jackson Takes a Stand Nobody knew exactly what President Jackson had to say on the issue of nullification. In April 1830 supporters of state rights invited the President to speak out at a dinner. President Jackson spoke directly to Calhoun at the dinner and said “Our Federal Union… must be preserved!”

16 The supporters were shocked and disappointed, but Calhoun answered the President’s challenge he said “The Union-next to our liberty, most dear.” Meaning that the fate of the Union must take second place to a state’s liberty to overrule the Constitution. Calhoun realized Jackson would not change his views. So he returned to congress to speak for Southern interest. Calhoun won election to the senate in December 1832 and then he resigned for vice presidency.

17 The Nullification Crisis In 1832 congress passed new lower tariff. The South still protested. South Carolina lead the fight to the so called Tariff of Abominations. The state legislatures passed the Nullification Act. To ease the crisis Jackson supported a compromise bill proposed by Henry Clay. In 1833 he persuade congress to pass the Force Bill. In response South Carolina accepted the new tariff. But to show that the have not been defeated, state leaders voted to nullify the force act. They claimed a victory for nullification, which forced a revision of the tariff. The crisis was over! 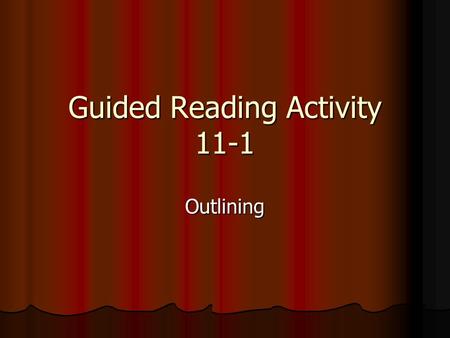 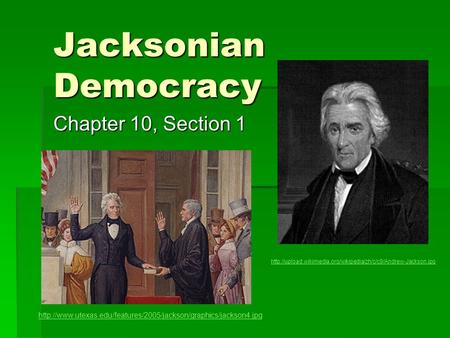 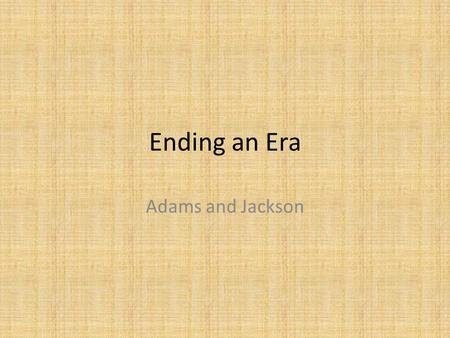 Ending an Era Adams and Jackson. 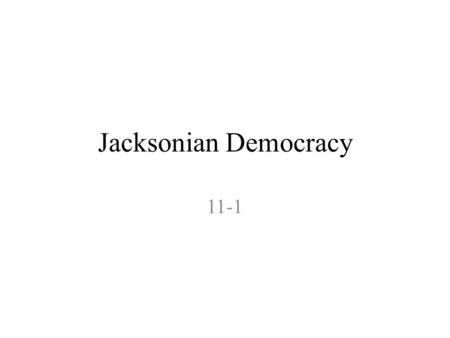 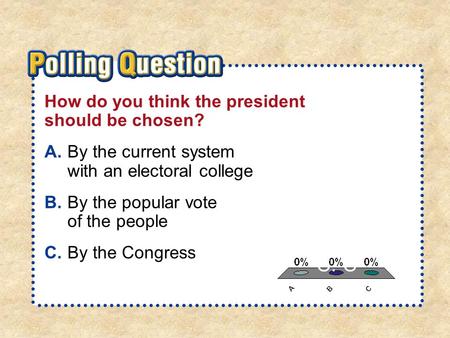 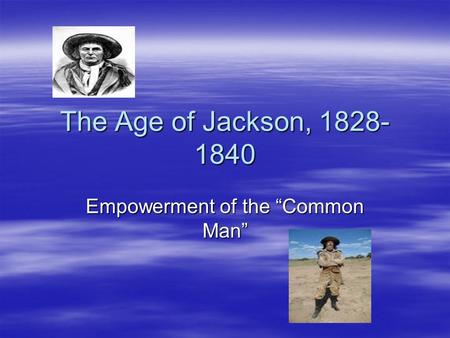 Empowerment of the “Common Man” 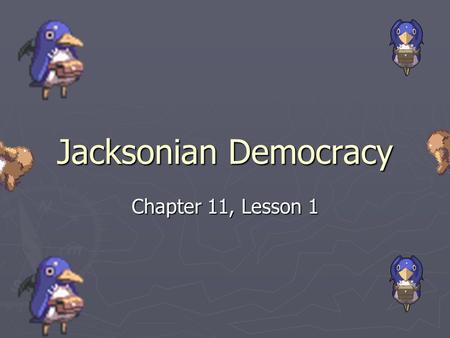 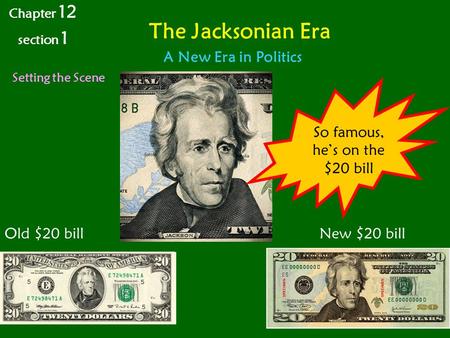 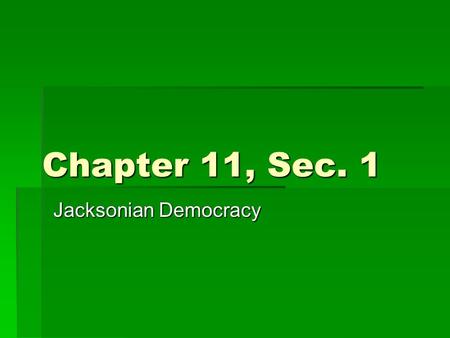 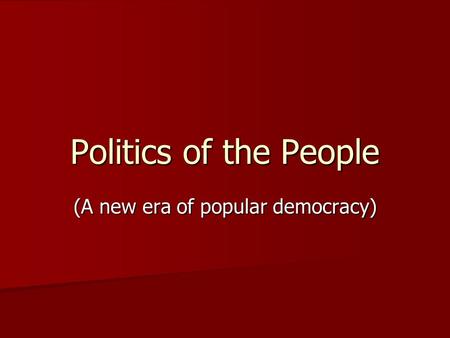 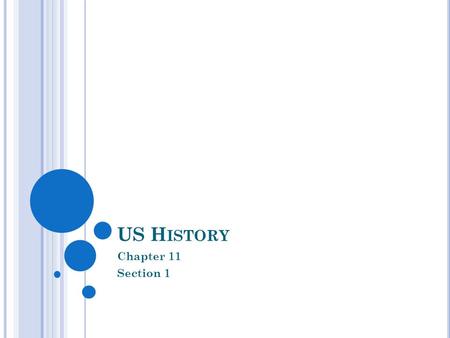 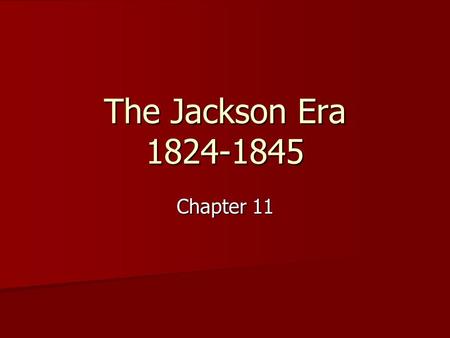