Music of the Baroque Period (1600-1750) Baroque Historical Highlights Age of Absolutism; Kings and Queens are all- powerful Known for extreme decadence.

Presentation on theme: "Music of the Baroque Period (1600-1750) Baroque Historical Highlights Age of Absolutism; Kings and Queens are all- powerful Known for extreme decadence."— Presentation transcript:

4 The Palace at Versailles

7 “Baroque” Defined Baroque means exaggerated or over- ornamented; these adjectives relate to music and visual arts

21 Aria Song for solo voice with orchestral accompaniment –usually expressing an emotional state through its outpouring of melody –found in operas, oratorios, and cantatas

22 Recitative Vocal line in opera, oratorio, or cantata that imitates the rhythms and pitch fluctuations of speech, often serving to lead into an aria

24 Basso Continuo (‘continuous bass’) Baroque accompaniment made up of a bass part usually played by two instruments: –A keyboard (or other chord-making instrument, such as a lute or organ), and –A low melodic instrument (such as cello or a basson)

27 Dido’s Lament from Dido and Aeneas Dido sings: Thy hand, Belinda, darkness shades me, On thy bosom let me rest; More I would be death invades me; Death is now a welcome guest.

28 Dido’s Lament from Dido and Aeneas When I am laid, am laid in earth, may my wrongs create No trouble in thy breast. Remember me! But ah! Forget my fate.

33 Affections /Affect p.95 of text The expression of one basic mood in Baroque music Specific rhythms or melodic patterns were associated with specific moods Not characteristic of OPERA, but found in oratorio and cantatas

34 G.F. Handel’s “Ev’ry Valley Shall Be Exalted” from The Messiah Ev’ry valley. (text painting highlighted in blue and purple) Ev’ry valley shall be exalted, and ev’ry mountain and hill made low, The crooked straight, and the rough places plain.

Download ppt "Music of the Baroque Period (1600-1750) Baroque Historical Highlights Age of Absolutism; Kings and Queens are all- powerful Known for extreme decadence." 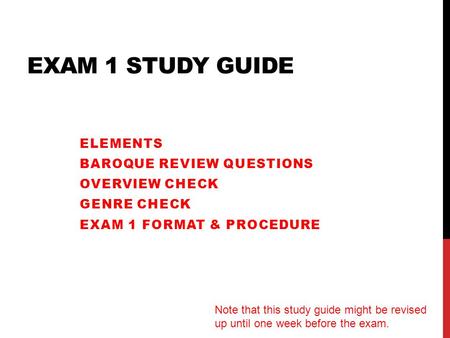