1 ICAOS Mini Training Transfer Eligibility and Reporting Instructions Eligibility Presented by: Training Committee [Revision 3/1/2014] Be Ready for a Test at the End.

4 Courts, Parole Boards, Community Corrections & other Executive Agencies –subject to ICAOS rules –MUST enforce & effectuate the Compact Do you know your state’s statute? The Interstate Compact for Adult Offender Supervision

5 What Triggers the Compact? No state shall permit an offender who is eligible for transfer under this compact to relocate to another state except as provided by these rules. Rule 2.110

8 “Supervision” Has 2 distinct criteria: –Oversight exercised by a controlling authority, which includes Courts, Parole Boards, etc… –Required to monitor regulations or conditions, other than monetary.

10 Eligible Misdemeanants Sentence = 1+ years of supervision AND Instant Offense includes one or more:  Person incurred direct or threatened physical or psychological harm.  2 nd or subsequent offense of driving while impaired by drugs or alcohol  Use or possession of a firearm involved.  Sex offense requiring registration in the sending state Rule 2.105

11 2 Types of Transfers Mandatory – if the offender meets the criteria to transfer, the receiving state MUST accept supervision Discretionary – Offenders not eligible for mandatory transfer Sending state must justify “WHY” Receiving state has the discretion to accept or reject supervision

12 Transfer Requirements Decision to transfer is solely at the discretion of the sending state. An Offender shall be eligible and the receiving state shall accept transfer, if the offender: a)Has more than 90 days of supervision remaining; and b)Has a valid plan of supervision; and c)Is in substantial compliance in the sending state; and d)Is a Resident of the Receiving State; or e)(1) has resident family in receiving state who are willing to assist and have the ability to assist. and, (2) can obtain employment or has means of support Rule 3.101

14 Discretionary Transfers Provide sufficient documentation to justify the requested transfer. The receiving state has the discretion to accept or reject the transfer of supervision in a manner consistent with the purpose of the compact –Public Safety –Rehabilitation of Offenders Rule 3.101-2

18 Living in Receiving State vs. Compact Definition of Resident Mandatory RI’s for Living in Receiving State Mandatory Transfer for ‘Resident’ The offender currently lives in the receiving state when sentenced to probation in the sending state and needs to go home after sentencing. The offender must have lived in the receiving state for at least one continuous year prior to committing the offense in the sending state

19 Notices of Departure & Arrival Fastest Processes in ICOTS! Sending StateReceiving State NOD when offender departs NOA when offender arrives and reports as instructed. Officer becomes the ‘supervising user’ in ICOTS Failed to Report? Submit a NOA and follow up with a Case Closure Notice Rule 4.105

20 Liability Liable is defined by Webster as “Legally obligated; responsible…” All compact member states can be held liable for circumventing or violating the ICAOS rules. ICAOS rules are federal law and there is a legal obligation to follow and enforce the rules as written.

21 Transfer of Offenders Advisory Opinion 3-2004 –Once an application has been made under the Compact an offender may not travel to the Receiving State without the Receiving State’s permission. Advisory Opinion 9-2006 –States which allow eligible offenders to transfer to the receiving state prior to the investigation being completed are in violation of the Compact. Rule 3.102(b) & Rule 2.110

22 Scenario #1 The sentencing court in my state has sentenced an offender to “informal probation” (bench probation) on a felony conviction for POSSESSION OF A CONTROLLED SUBSTANCE which includes standard conditions of community service work and counseling. Because the offender has been placed on informal probation to the court, this case does not fall under the transfer requirements of the Interstate Compact. a)True b)False

23 Scenario #2 I am the supervising officer for a felony offender that has been court ordered to attend substance abuse treatment in an out-of-state treatment facility. Since the program is only three months long and the court has ordered the treatment, I may give him a travel permit that allows him attend the program without triggering the rules of the compact. a)True b)False 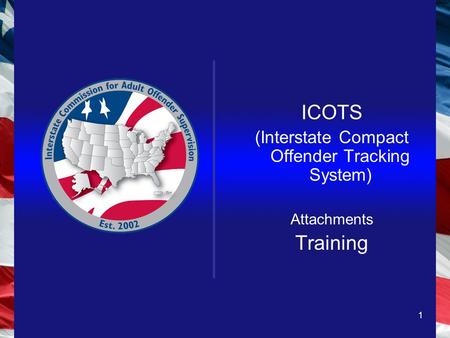 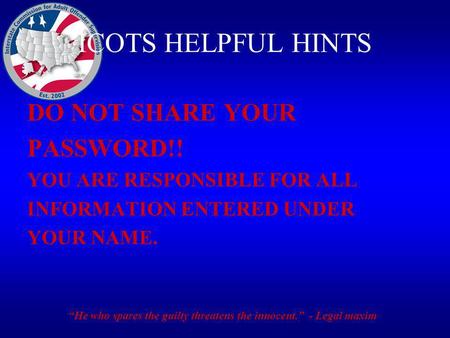 ICOTS HELPFUL HINTS DO NOT SHARE YOUR PASSWORD!! YOU ARE RESPONSIBLE FOR ALL INFORMATION ENTERED UNDER YOUR NAME. He who spares the guilty threatens the. 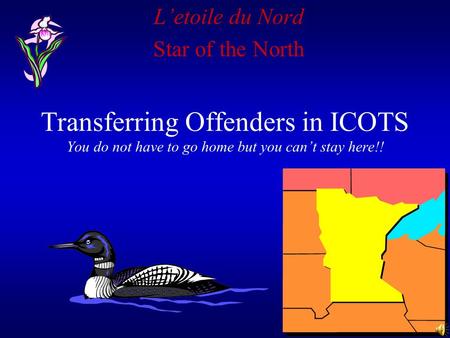 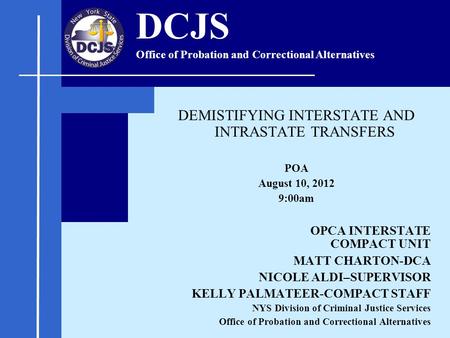 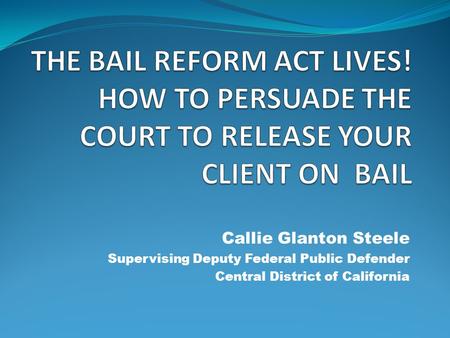 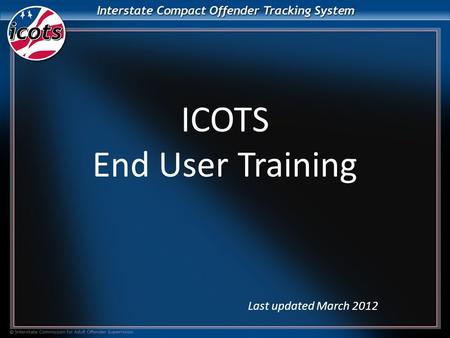 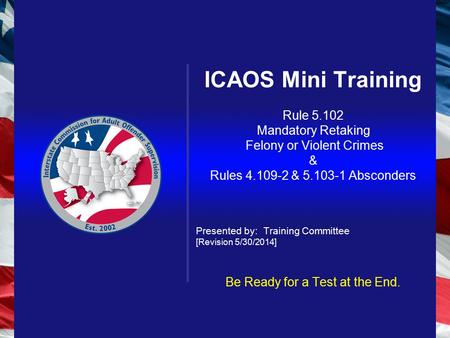 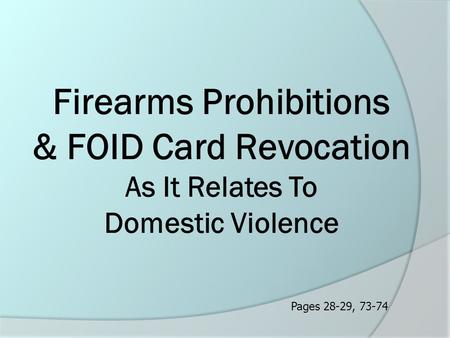 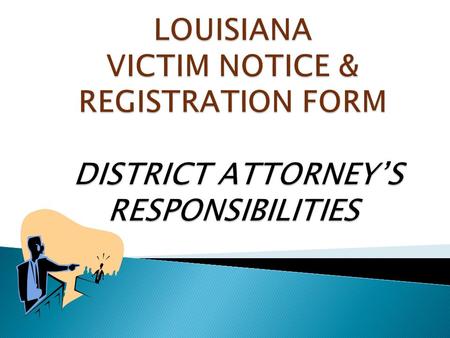 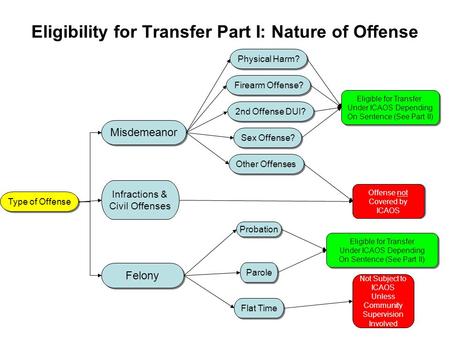 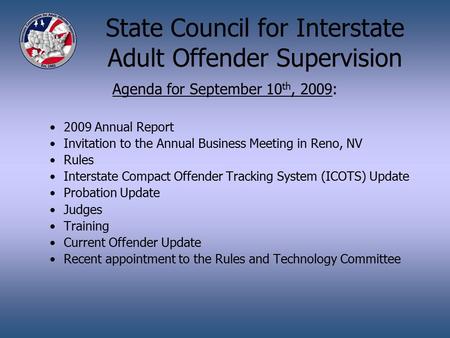 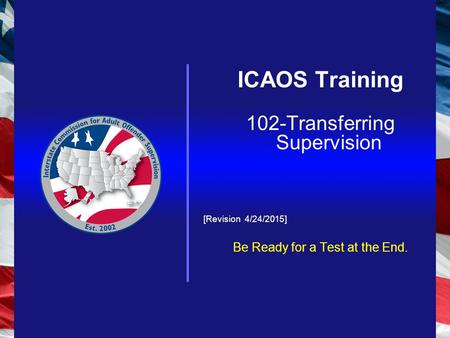