2 What is the scientific method?
It is a way in which scientists answer and solve problems The steps to solve a problem or question

3 Steps of the scientific method
1. State problem or question to be solved or answered 2. Form a hypothesis 3. Experiment to test hypothesis 4. Collect data from experiment and observations 5. Form a conclusion 6. Communicate ideas and results

7 Independent Variable The variable that is changed in an experiment
Example: Susan sets up an experiment to test whether the position of the light impacts the length of the shadow. In order to test this, she shines the light on a cereal box from six different positions. At each position, she measures the length of shadow the cereal box casts. What would be the independent variable? (Hint what is Susan changing?) The position of the light

13 What makes a good experiment:
Control group One independent variable Testing the hypothesis many times (many trials)

19 Communicating Sharing ideas and conclusions about your experiment with others through writing and speaking Scientists share the design of an experiment as well so others can repeat the experiment to check the results Communicating information about discoveries often leads to new questions, new hypotheses, and new investigations.

20 Model Represents an object or system in science.
Example: Globe of Earth

21 Theory A well tested explanation for many observations and experimental results. Well tested and widely accepted by scientists. Example: Atomic theory- all substances are composed of tiny particles called atoms. This theory explains many observations: why water freezes or boils at certain temperature, and why water can dissolve many other materials

22 Law A statement that describes what scientists expect to happen every time under a particular set of conditions Example- Law of Gravity “What goes up must come down.” A scientific law describes an observed pattern in nature without attempting to explain it. 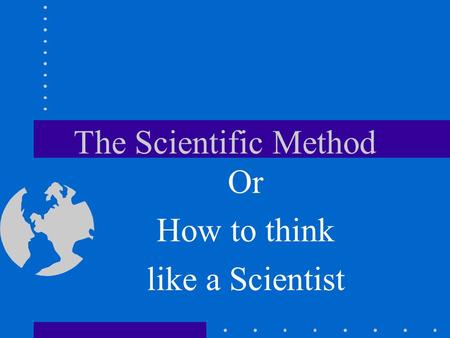