3 Newton & The Spectrum By passing a narrow beam of sunlight through a triangular-shaped glass prism, Newton showed that sunlight is composed of a mixture of all the colors of the rainbow.

7 Difference Among Materials
certain frequencies are reflected from the object, others are absorbed. A particular material absorbs the light frequency that matches the frequency at which electrons in the atoms of that material vibrate.

10 Color by Transmission Blue glass transmits only the energy of the frequency of blue light; energy of the other frequencies is absorbed and warms the glass. The color of a transparent object is the color of the light it transmits. A red piece of glass appears red because it absorbs all color except red. A blue piece of glass absorbs all colors except blue. The material in the glass that selectively absorbs colored light is known as pigment.

12 Sunlight White light from the sun is a composite of all the visible frequencies. Yellow-green light is the brightest part of sunlight. Since humans evolved in the presence of sunlight, it is not surprising that we are most sensitive to yellow- green. The graphical distribution of brightness versus frequency is called the radiation curve of sunlight. Figure 28.7 The radiation curve of sunlight is a graph of brightness versus frequency. Sunlight is brightest in the yellow-green region, in the middle of the visible range.

14 Mixing Colored Light When a combination of only red, green, and blue light of equal brightness is overlapped on a screen, as shown in the figure to the right, it appears white.

16 Mixing Colored Light You can make almost any color at all by overlapping red, green, and blue light and adjusting the brightness of each color of light. For this reason red, green, and blue are called the additive primary colors. Color television is based upon the ability of the human eye to see combinations of three colors as a variety of colors.

19 Complementary Colors Figure – Six blocks and their shadows appear as different colors depending on the color of light that illuminates them.

22 Mixing Colored Pigments
Paints and dyes (pigments) absorb light of a wide variety of frequencies, and reflect a wide range as well. Pigments reflect a mixture of colors. When paints of dyes are mixed, the mixture absorbs all the frequencies each paint or dye in it absorbs. Figure shows, the only color both yellow and blue pigment reflect is green. This process is called color mixing by subtraction. Figure 28.12

23 Mixing Colored Pigments
The three paint or dye colors that are most useful in color mixing by subtraction are magenta (bluish red), yellow, and cyan (greenish blue). Magenta, yellow, and cyan are the subtractive primary colors, used in printing illustrations in full color. Figure 28.14

25 Why the Sky is Blue Scattering is a process in which sound or light is absorbed and reemitted in all directions. THE SKY Figure 28.15 A beam of light falls on an atom and causes the electrons in the atom to move temporarily in larger orbits. The more vigorously oscillating electrons reemit light in various direction. Light is scattered. The tinier the particle, the higher the frequency of light it will scatter. Most of the ultraviolet light from the sun is absorbed by a protective layer of ozone gas in the upper atmosphere. The sky is blue because its component particles scatter high-frequency light. Of visible light, violet is scattered the most, followed by blue, green, yellow, orange, and red in that order. Our eyes are not very sensitive to violet, and more sensitive to blue, so we see a blue sky.

26 Why the Sky is Blue THE CLOUDS
Water droplets in a variety of sizes – some microscopic – make up clouds. These different sizes result in a variety of frequencies for scattered light. The overall result is a white cloud. The larger the size of the particles, the more light that is absorbed. This contributes to the darker appearance of rain clouds.

27 Why the Sky is Blue Blue Sky White Clouds

29 Why Sunsets are Red The lower frequencies are scattered the least by nitrogen and oxygen. Therefore red, orange and yellow light are transmitted through the atmosphere more readily than violet and blue, which scatter first. At sunset and sunrise, light travels through more of the atmosphere, and most of the violet and blue have already been scattered.

30 Why Sunsets are Red By the time a beam of light gets to the ground at sunset (or sunrise), all of the high frequency has already been scattered. Only the lower frequencies remain, resulting in a red sunset (or sunrise). The colors of the sun and sky are consistent with our rules for color mixing. When blue is subtracted, yellow remains. The subtraction of violet, leaves orange.

32 Why Water is Greenish Blue
Water is greenish-blue because water molecules absorb red.

34 The Atomic Color Code – Atomic Spectra
When made to emit light, every element has its own characteristic color. The color is a blend of various frequencies of light. Light of each frequency is emitted when the electron of an atom change energy states: Energy states are relate to the orbit of each electron. The lower the energy, the closer to the nucleus the electron is. When an atom absorbs external energy, one or more of its electrons moves to a higher orbit. Such an energized atom is in an excited state. This stage only lasts momentarily, for the electron quickly tries to return to its normal state. When the electron returns to its normal state, the atom emits a throbbing pulse of light—a photon. After an excited atom emits light, it returns to its normal state.

35 The Atomic Color Code – Atomic Spectra
Figure 28.22 The different electron orbits in an atom are like steps in energy levels When an electron is raised to a higher level, the atom is excited. When the electron returns to its original level, it releases energy in the form of light.

36 The Atomic Color Code – Atomic Spectra
Relating Frequency and Energy: The frequency of the emitted photon, or its color, is directly proportional to the energy transition of the electron. A photon carries an amount of energy that corresponds to its frequency. Measuring the frequencies of light in a spectrum is also measuring the relative energy levels in the atom emitting that light. Therefore, the frequencies, or colors, of light emitted by elements are the “fingerprint” of the elements! Figure 28.23 A fairly pure spectrum is produced by passing white light through a thin slit, two lenses, and a prism.

37 The Atomic Color Code – Atomic Spectra
Analyzing Light: Light from a glowing element can be analyzed with an instrument called a spectroscope. The arrangement of a thin slit, lenses, and a prism (or diffraction grating) is the basis for the spectroscope. A spectroscope displays the spectra of the light from hot gases and other light sources. (Spectra is the plural of spectrum.) The spectrum of an element appears not as a continuous bland of color but as a series of lines. Such a spectrum is known as a line spectrum. The line spectrum of an element is unique, however the individual colors match the location of that same color in a continuous spectrum.

38 The Atomic Color Code – Atomic Spectra
Figure 28.25 An incandescent bulb has a continuous spectrum. Each of the three elements Hydrogen Sodium, and Mercury has a different line spectrum 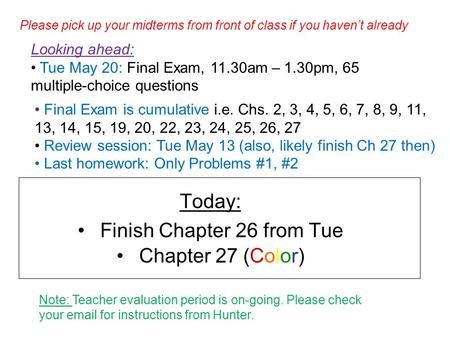 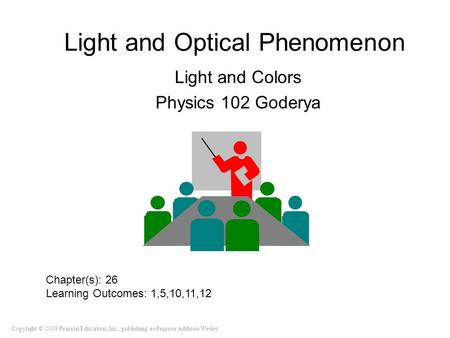 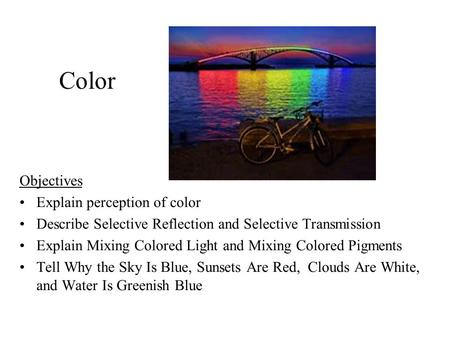 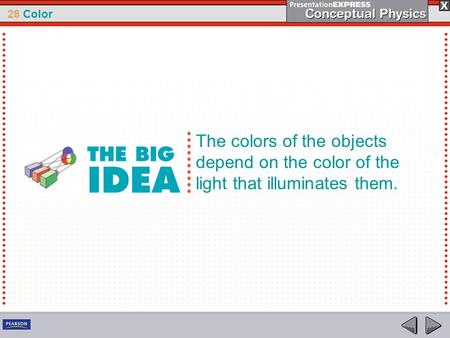 Color is in the eye of the beholder and is provoked by the frequencies of light emitted or reflected by things. We see red in a rose when light of certain. 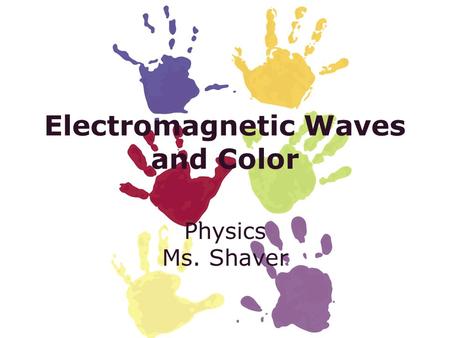 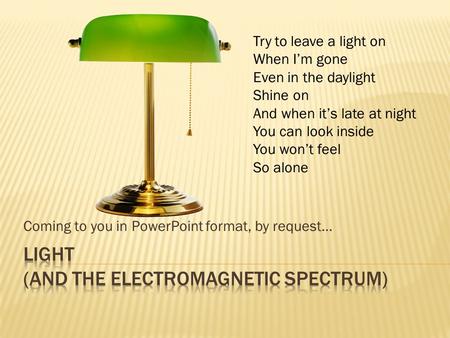 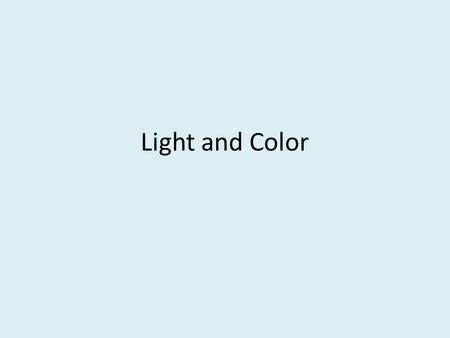