Presentation on theme: "Chapter 28 Color Separation of visible light into its different colors Newton used a prism to show how light is separated into its component parts When."— Presentation transcript:

3 Separation of visible light into its different colors Newton used a prism to show how light is separated into its component parts When all the wavelengths of the visible light spectrum strike your eye at the same time, white is perceived Dispersion

4 Prism optical device having a triangular shape, made of glass or quartz; used to deviate a beam of light or invert an image A Prism can be used to separate light into the visible spectrum of colors

5 So when you are in a room with no lights and everything around you appears black, it means that there are no wavelengths of visible light striking your eye as you sight at the surroundings

6 The Color Spectrum Spectrum the spread of colors seen when white light is passed through a prism the spread of radiation by frequency, so that each frequency appears at a different position

9 Each frequency & wavelength corresponds to a specific color

10 The Color Spectrum Mixing all of the colors of light in the spectrum will produce white light. Black is not a color but is the absence of light. Objects appear black when they absorb light of all visible frequencies. Carbon, soot and black velvet are excellent absorbers of light.

13 luminance response of the eye The eye does not have an equal number of each of the three types of cones About half of all of the cones are red cones Most of the rest are green cones Only a few of the cones are blue cones What the three primary colors of light? Red Blue Green

14 Color Responses of the Cones

17 Three factors determine the colors we see 1. the color of the light that shines on the object 2. the reflective properties of the object 3. the biology of the eye that sees the object.

21 When visible light strikes an object and a specific frequency becomes absorbed, that frequency of light will never make it to our eyes

23 So the color is not in the object itself, but in the light which strikes the object.

25 What color will an object appear if it is able to absorb all the frequencies of visible light except yellow? Yellow! But only if the source light contains ROYGBIV

26 Color by Reflection Light- is a type of electromagnetic wave which stimulates the retina of our eyes Light is reflected from objects in a similar way to how sound is reflected.

28 Color by Reflection If opaque, light passes back from where it came (reflection) Materials absorb some light & reflect the rest If a material absorbs all the light, it is black An object can only reflect light of frequencies present in the illuminating light

35 Complementary Colors If you begin with white light and subtract some color from it, the resulting color will appear as the complement of the one subtracted. Color subtraction Color addition

41 Color Subtraction Example 1 Magenta light shines on a sheet of paper containing a yellow pigment. Determine the appearance of the paper. Magenta light consists of red light and blue light. A yellow pigment is capable of absorbing blue light. Thus, blue must be subtracted from the light which shines on the paper. This leaves red light. If the paper reflects the red light, then the paper will look red. M - B = (R + B) - B = R

46 Why is the Sky Blue? The high frequencies (BIV) are more easily scattered by atmospheric particles While the lower frequencies (ROY) are most likely to pass through the atmosphere without a significant alteration in their direction

47 Why is the Sky Blue? The interaction of sunlight with matter can result in one of three wave behaviors: absorption, transmission, and reflectionabsorption, transmission, and reflection This scattering process involves the absorption of a light wave by an atom followed by reemission of a light wave in a variety of directions The amount of multidirectional scattering which occurs is dependent upon the frequency of the light

48 Why is the Sky Blue? The lower frequencies of sunlight (ROY) tend to reach our eyes as we sight directly at the sun during midday not all frequencies are equally intense the sun appears ………………….. during midday due to the ……………………….. of dominant amounts of ………………….. frequencies …………………. our atmosphere and to our eyes

51 Why Sunsets are Red The effect of a red sunset becomes more pronounced if the atmosphere contains more and more particles. The presence of sulfur aerosols (emitted as an industrial pollutant) in our atmosphere contributes to some magnificent sunsets and some very serious environmental problems

54 The Atomic Color Code-Atomic Spectra Every element has its own characteristic color when made to emit light Spectroscope-An instrument that analyzes the light from glowing elements The arrangement of thin slit, lenses, and a prism is the basis for the spectroscope

65 CAN YOU SEE THREE WOMEN IN EINSTEIN'S FACE?

66 Study for your test

Download ppt "Chapter 28 Color Separation of visible light into its different colors Newton used a prism to show how light is separated into its component parts When." 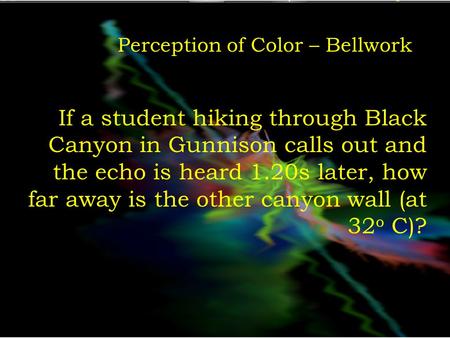 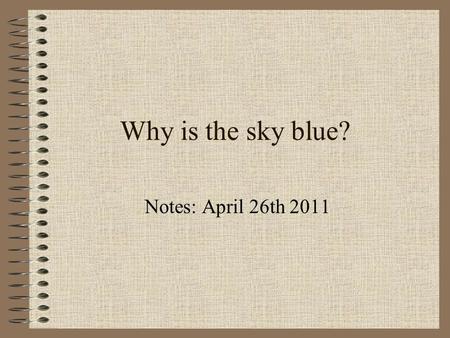 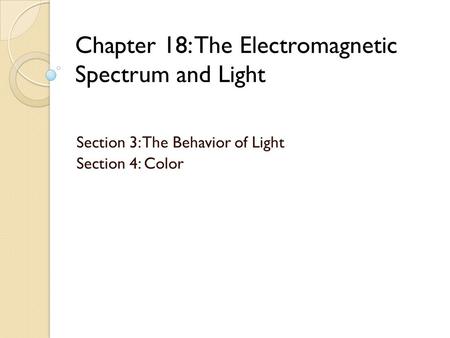 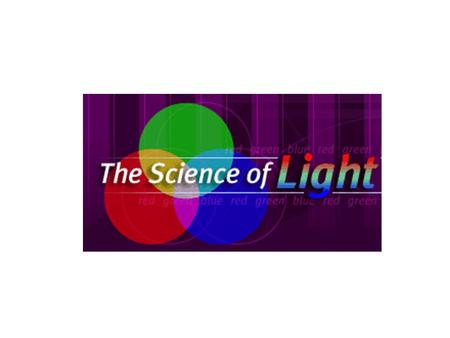 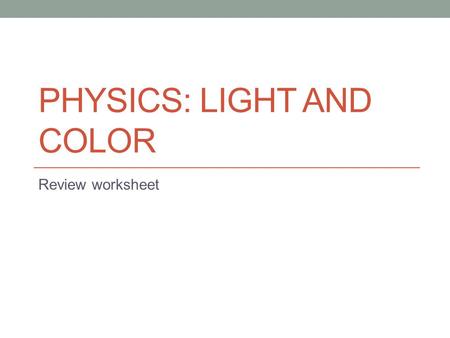