2 Fossil Fuels Coal, Oil and Gas are called "fossil fuels"
because they have been formed from the fossilized remains of prehistoric plants and animals. They provide around 66% of the world's electrical power, and 95% of the world's total energy demands

4 Coal provides around 28% of our energy, and oil provides 40%.
Crude oil (called "petroleum") is easier to get out of the ground than coal, as it can flow along pipes. This also makes it cheaper to transport.

6 Advantages to Using Fossil Fuels
Very large amounts of electricity can be generated in one place using coal, fairly cheaply. Transporting oil and gas to the power stations is easy. Gas-fired power stations are very efficient. A fossil-fuelled power station can be built almost anywhere

7 Disadvantages of Using Fossil Fuels
Basically, the main drawback of fossil fuels is pollution. Burning any fossil fuel produces carbon dioxide, which contributes to the "greenhouse effect", warming the Earth. Burning coal produces sulphur dioxide, a gas that contributes to acid rain. With the United States importing 55% of its oil, oil spills are a serious problem Mining coal can be difficult and dangerous. Strip mining destroys large areas of the landscape.

8 Some power stations are built on the coast, so they can use sea water to cool the steam instead. However, this warms the sea and can affect the environment, although the fish seem to like it.

9 Is it Renewable? Fossil fuels are NOT a renewable energy resource
Once we've burned them all, there isn't any more, and our consumption of fossil fuels has nearly doubled every 20 years since This is a particular problem for Oil, because we also use it to make plastics and many other products.

10 Nuclear Power Nuclear power is
generated using Uranium, which is a metal mined in various parts of the world. Nuclear power produces around 11% of the world's energy needs, and produces huge amounts of energy from small amounts of fuel, without the pollution that you'd get from burning fossil fuels.

12 The reactor uses Uranium rods as fuel, and the heat is generated by nuclear fission. Neutrons smash into the nucleus of the uranium atoms, which split roughly in half and release energy in the form of heat.

14 Disadvantages of Nuclear Power
Although not much waste is produced, it is very, very dangerous. It must be sealed up and buried for many years to allow the radioactivity to die away.

15 Is it Renewable? Nuclear energy from Uranium is NOT renewable.
Once we've dug up all the Earth's uranium and used it, there isn't any more.

16 Solar Power Solar Cells really
called photovoltaic" or "photoelectric" cells) convert light directly into electricity. In a sunny climate, you can get enough power to run a 100W light bulb from just one square meter of solar panel.

17 Solar Water Heating heat from the Sun is used to heat water in
glass panels on your roof. Solar heating is worthwhile in places like California and Australia, where you get lots of sunshine.

18 Solar Furnaces use a huge array of mirrors to concentrate the Sun's energy into a small space and produce very high temperatures.

19 Advantages to solar power
Solar energy is free - it needs no fuel and produces no waste or pollution. In sunny countries, solar power can be used where there is no easy way to get electricity to a remote place. Handy for low-power uses such as solar powered garden lights and battery chargers

20 Disadvantages to Solar Power
Doesn't work at night. Very expensive to build solar power stations. Solar cells cost a great deal compared to the amount of electricity they'll produce in their lifetime. Can be unreliable unless you're in a very sunny climate.

21 Is Solar Power Renewable?
Solar power is renewable. The Sun will keep on shining anyway, so it makes sense to use it.

22 Wind Power We've used the wind as an energy source for a long time. The Babylonians and Chinese were using wind power to pump water for irrigating crops 4,000 years ago, and sailing boats were around long before that. Wind power was used in the Middle Ages, in Europe, to grind corn, which is where the term "windmill" comes from.

23 How Wind Power Works The Sun heats our atmosphere unevenly, so some patches become warmer than others. These warm patches of air rise, other air blows in to replace them - and we feel a wind blowing. We can use the energy in the wind by building a tall tower, with a large propellor on the

24 Advantages to Wind power
Wind is free, wind farms need no fuel. Produces no waste or greenhouse gases. The land beneath can usually still be used for farming. Wind farms can be tourist attractions. A good method of supplying energy to remote areas.

25 Disadvantages of Wind Power
The wind is not always predictable some days have no wind. Suitable areas for wind farms are often near the coast, where land is expensive. Some people feel that covering the landscape with these towers is unsightly. Can kill birds - migrating flocks tend to like strong winds. Splat! Can affect television reception if you live nearby. Noisy. A wind generator makes a constant, low, "swooshing" noise day and night.

26 Is Wind Power Renewable?
Wind power is renewable. Winds will keep on blowing, it makes sense to use them.

27 Hydroelectricity A dam is built to trap water, usually in a valley where there is an existing lake. Water is allowed to flow through tunnels in the dam, to turn turbines and thus drive generators. Hydro-electricity provides 20% of the world’s power

28 Advantages of Hydroelectricity
Once the dam is built, the energy is virtually free. No waste or pollution produced. Much more reliable than wind, solar or wave power. Water can be stored above the dam ready to cope with peaks in demand. Hydro-electric power stations can increase to full power very quickly, unlike other power stations. Electricity can be generated constantly.

29 Disadvantages to Hydro-electricity
The dams are very expensive to build. Building a large dam will flood a very large area upstream, causing problems for animals that used to live there. Finding a suitable site can be difficult - the impact on residents and the environment may be unacceptable. Water quality and quantity downstream can be affected, which can have an impact on plant life.

30 Is it Renewable? Hydro-electric power is renewable. The Sun provides the water by evaporation from the sea, and will keep on doing so.

31 How Biomass Works Plant and animal waste is used to produce fuels such as methanol, natural gas, and oil. We can use rubbish, animal manure, woodchips, seaweed, corn stalks and other wastes. Sugar cane is harvested and taken to a mill, where it is crushed to extract the juice. The juice is used to make sugar, whilst the left-over pulp, called "bagasse" can be burned in a power station. Other solid wastes, can be burned to provide heat, or used to make steam for a power station. Burn fuel>heat water to make steam>steam turns turbine>turbine turns generator>electrical power sent around the country

32 Advantages to Biomass It makes sense to use waste materials where we can. The fuel tends to be cheap. Less demand on the Earth's resources.

33 Disadvantages to Using Biomass
Collecting the waste in sufficient quantities can be difficult. We burn the fuel, so it makes greenhouse gases. Some waste materials are not available all year round.

34 Is It Renewable? Biomass is renewable
We will always make waste products. We can always plant & grow more sugar cane and more trees, so those are renewable too.

35 Geothermal Power Hot rocks underground heat water to produce steam. We drill holes down to the hot region, steam comes up, is purified and used to drive turbines, which drive electric generators. There may be natural "groundwater" in the hot rocks anyway, or we may need to drill more holes and pump water down to them.

36 Advantages to Geothermal Power
Geothermal energy does not produce any pollution, and does not contribute to the greenhouse effect. The power stations do not take up much room, so there is not much impact on the environment. No fuel is needed. Once you've built a geothermal power station, the energy is almost free. It may need a little energy to run a pump, but this can be taken from the energy being generated.

37 Disadvantages to Geothermal Power
The big problem is that there are not many places where you can build a geothermal power station. You need hot rocks of a suitable type, at a depth where we can drill down to them. The type of rock above is also important, it must be of a type that we can easily drill through. Sometimes a geothermal site may "run out of steam", perhaps for decades. Hazardous gases and minerals may come up from underground, and can be difficult to safely dispose of.

38 Is it Renewable? Geothermal energy is renewable.
The energy keeps on coming, as long as we don't pump too much cold water down and cool the rocks too much.

39 Tidal Power Tidal power works rather like a hydro-electric scheme, except that the dam is much bigger. A huge dam (called a "barrage") is built across a river estuary. When the tide goes in and out, the water flows through tunnels in the dam. The ebb and flow of the tides can be used to turn a turbine, or it can be used to push air through a pipe, which then turns a turbine. Large lock gates, like the ones used on canals, allow ships to pass. Only around 20 sites in the world have been identified as possible tidal power stations.

40 Advantages to Tidal Power
Once you've built it, tidal power is free. It produces no greenhouse gases or other waste. It needs no fuel. It produces electricity reliably. Not expensive to maintain. Tides are totally predictable.

41 Disadvantages to Tidal Power
A barrage across an estuary is very expensive to build, and affects a very wide area - the environment is changed for many miles upstream and downstream. Many birds rely on the tide uncovering the mud flats so that they can feed. there are few suitable sites for tidal barrages. Only provides power for around 10 hours each day, when the tide is actually moving in or out.

42 Is it Renewable? Tidal energy is renewable.
The tides will continue to ebb and flow, and the energy is there for the taking. 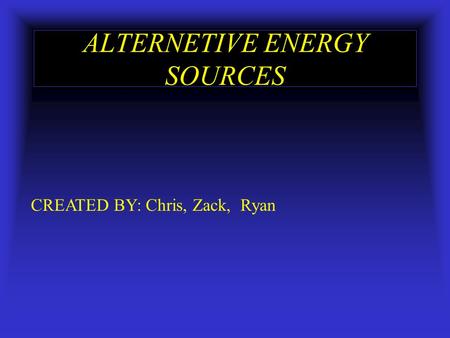 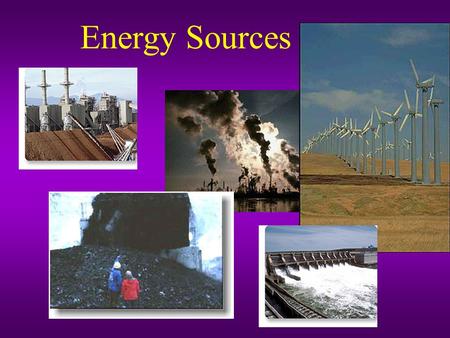