Presentation on theme: "Jan MarešDuy Le Duc. WHAT IS ENERGY ?  ENERGY IS DEFINED AS „THE ABILLITY TO DO WORK“  ONE OF THE MOST FUNDAMENTAL PARTS OF OUR UNIVERSE  EVERYTHING."— Presentation transcript:

2 WHAT IS ENERGY ?  ENERGY IS DEFINED AS „THE ABILLITY TO DO WORK“  ONE OF THE MOST FUNDAMENTAL PARTS OF OUR UNIVERSE  EVERYTHING WE DO IS CONNECTED TO ENERGY IN ONE FORM TO ANOTHER ALTERNATIVE SOURCES OF ENERGY  NOT BASED ON THE BURNING OF FOSSILS FUELS OR SPLITTING OF ATOMS  SOLAR, WIND, HYDRO, GEOTHERMAL, BIOMASS,…

3 WHERE IS ENERGY USED ? „ENERGY IS AN IMPORTANT PART OF OUR DAILY LIVES“  WORK  LIGHHTS OUR CITIES  POWERS OUR VEHICLES, TRAINS AND PLAINS  WARMS OUR HOMES  COOKS OUR FOOD  PLAYS OUR MUSIC, GIVES US PICTURES ON TV „LIFE WITHOUT ENERGY IS NOT POSSIBLE “

7 S O L A R E N E R G Y B a s i c i n f o r m a t i o n Solar Water Heating Collectors The sun is very powerful sources of energy. Solar energy can be aplied in many ways. There are 3 main types:  SOLAR WATER HEATING COLLECTORS  PHOTOVOLTAIC or SOLAR ELECTRIC PANELS (cells)  SOLAR FURNACES These panels absorb the energy from the sun and transfer it to heat water

8 PHOTOVOLTAIC or SOLAR ELECTRIC PANELS These panels transform the solar radiation directly into electricity. SOLAR FURNACES Use a huge array of mirrors to concentrate the Sun's energy into a small space and produce very high temperatures (up to 33,000°C). This high temperature can be use to heat to make steam and drive a generator (turbines) to make electricity. At Odellio (France), there is one big mirror that is used for scientific experiments.

10 H Y D R O E N E R G Y H o w d o e s i t w o r k ? A dam is built to trap water, usually in a valley where there is an existing lake. Water is allowed to flow through tunnels in the dam, to turn turbines and thus drive generators. We have used running water as an energy source for thousands of years, mainly to grind corn. And now, we´re using it to make the electricity.

12 The centre of the Earth is around 6000 degress Celsius - hot enough to melt rock. Even a few kilometres down, the temperature can be over 250 degrees Celsius. In general, the temperature rises one degree Celsius for every 36 metres you go down. G E O T H E R M A L E N E R G Y H o w d o e s i t w o r k ? Hot rocks underground heat water to produce steam. We drill holes down to the hot region, steam comes up, is purified and used to drive turbines, which drive electric generators. There may be natural "groundwater" in the hot rocks anyway, or we may need to drill more holes and pump water down to them.

13 Do you know? The first geothermal power station was built at Landrello, in Italy. Geothermal power is being used also in New Zealand Iceland, Japan, the Philippines and the United States. The name "geothermal" comes from two Greek words: "geo" means "Earth" and "thermal" means "heat". V o c a b u l a r y: steam: vodní pára purify: č istit

14 B I O M A S S E N E R G Y Wood was once our main fuel and we use it until now. Sugar cane is grown in some areas, and can be fermented to make alcohol, which can be burned to generate power in the same way as coal. Alternatively, the cane can be crushed and the pulp (called "bagasse") can be burned, to make steam to drive turbines. And also we can use solid, plant, animal wastes, wastesrubbish, animal manure, woodchips, seaweed, corn stalks and other wastes. Burn Fuel H o w d o e s i t w o r k ? Heat water to make steam Steam turns turbines Turbines turn generators Electrical power sent aroud country

Download ppt "Jan MarešDuy Le Duc. WHAT IS ENERGY ?  ENERGY IS DEFINED AS „THE ABILLITY TO DO WORK“  ONE OF THE MOST FUNDAMENTAL PARTS OF OUR UNIVERSE  EVERYTHING." 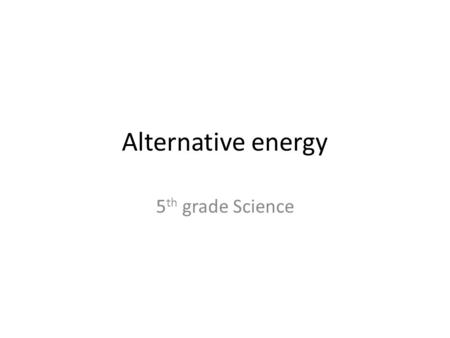