2 Natural Resources A natural resource is a feature of Earth that benefits people. Earth’s natural material resources are things like air, fresh water, and soil.

5 Electricity from renewable resources
It is also possible to use: moving water (hydroelectric) hot spots near Earth’s surface (geothermal) tides to produce electricity. Let’s look at some of these!

12 Advantages Once the dam is built, the energy is
virtually free. No waste or pollution produced. Much more reliable than wind, solar or wave power. Water can be stored above the dam ready to cope with peaks in demand. Hydro-electric power stations can increase to full power very quickly, unlike other power stations. Electricity can be generated constantly.

13 Disadvantages The dams are very expensive to build. However, many dams are also used for flood control or irrigation, so building costs can be shared. Building a large dam will flood a very large area upstream, causing problems for animals that used to live there. Finding a suitable site can be difficult – the impact on residents and the environment may be unacceptable. Water quality and quantity downstream can be affected, which can have an impact on plant life.

19 Advantages Wind is free, wind farms need no fuel. Produces no waste or greenhouse gases. The land beneath can usually still be used for farming. Wind farms can be tourist attractions. A good method of supplying energy to remote areas.

20 Disadvantages The wind is not always predictable –
some days have no wind. Suitable areas for wind farms are often near the coast, where land is expensive. *Some people feel that covering the landscape with these towers is unsightly. Can kill birds - migrating flocks tend to like strong winds. Splat! Can affect television reception if you live nearby. Noisy. A wind generator makes a constant, low, "swooshing" noise day and night, which can drive you nuts. An entire wind farm makes quite a racket!

21 Solar power Several ways to use the sun for power!

22 Solar cells to make electricity like your solar calculator does.

23 Solar power plants that can produce large amounts of electricity instead of for one house.
Info on picture

26 Advantages Solar energy is free - it needs no fuel and produces no waste or pollution. In sunny countries, solar power can be used where there is no easy way to get electricity to a remote place.

27 Disadvantages *Doesn't work at night. *Very expensive to build solar power stations. Solar cells cost a great deal compared to the amount of electricity they'll produce in their lifetime. *Can be unreliable unless you're in a very sunny climate.

31 Disadvantages Very expensive to build.
Affects a very wide area - the environment is changed for many miles upstream and downstream. *Many birds rely on the tide uncovering the mud flats so that they can feed. *Only provides power for around 10 hours each day, when the tide is actually moving in or out. *There are very few suitable sites for tidal power stations.

34 This is steam, not polluted air!

37 Disadvantages Although not much waste is produced,
it is very, very dangerous. It must be sealed up and buried for many years to allow the radioactivity to die away. Nuclear power is reliable, but a lot of money has to be spent on safety – if it does go wrong, a nuclear accident can be a major disaster.

38 Geothermal energy The earth has lots of heat inside!

39 Sometimes it is very close to the surface.

42 What do you think would be the advantages and disadvantages of geothermal energy? 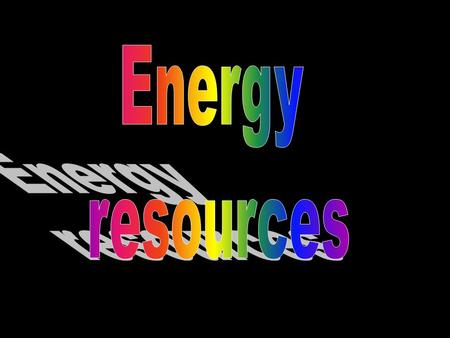