3 Standards E1-4 create written work that has clear focus, sufficient detail, coherent organization, effective use of voice, correct use of conventions of Standard American English. E1-5 write for a variety of purposes. E1-6 Access and use information from a variety of sources.

5 Elements of Literature include:
Genre Types or categories of literature. Genre groups are determined by the structure and the characteristics they share.

7 Genre continued… Poetry- literature that conveys emotion and self expression. Prose- All writing that is not poetry. Drama- Literature intended to be acted out (performed). Radio scripts T.V. scripts Plays

8 Characters The Figures in the story. These can be people and animals also. Characterization Direct and indirect ways to identify and describe characters.

9 Characters include: Narrator The person telling the story. Protagonist
The main character. Often called the hero or the good guy. Antagonist The person, situation, or thing that is trying to prevent the protagonist from achieving his/her goal. Often called the enemy, the bad guy, or the villain. Foil A character who is the direct opposite of another character. He/she is included in the story to emphasize specific details about others.

10 Writers use Characterization to develop characters by:
Description For example, How characters look, dress and how old they are. Narration Telling the story through the speaker. Dialogue Conversation between two or more characters. Dialect The way the characters speak. (Regional accents, culture specific phrases and slang). Actions What the characters actually do. This often indicates how they think and feel without saying it.

11 Plot The sequence or series of related events in a story. It is the order in which they happen. The plot diagram maps out the way that a story unfolds.

12 Part of the Plot Plot Diagram Climax Suspense Falling Action
The most intense part of the story. The highpoint. Plot Diagram Suspense (excitement and anticipation) Foreshadowing (hints or clues that something is about to happen) Falling Action The story is winding down. Readers begin to understand what has happened and why. Rising Action Story begins to develop Conflict is beginning to surface. Resolution Conflict is solved. Exposition Characters Setting Solution The end

13 Elements of Literature continued…
Setting The time, place and surroundings where the story occurs. Theme The message that the entire passage is communicating to the reader. Sometimes it is hidden (subliminal) and sometimes it is not hidden (apparent). Universal Theme Situations, relationships, and emotions that are common to all humans no matter when, where, or how they live. Author’s Style The way an author chooses to write.

14 Our Focus… The Short Story

15 The Short Story Tells a complete story in just 500 to 15,000 words.
Most often, the story has a clear beginning, middle, and end. It reveals the character’s personalities through actions and thoughts.

17 Elements of the Short Story
Setting Conflict Point of View First person- narrator uses “I, We, Us” Narrator is a part of the story. Second Person- Narrator uses “You, and One” He/She speaks to the reader by indirectly addressing them. Third Person- Narrator uses “He, She, They, Them” Story is told in a second handed way as though the narrator was watching it rather than participating in it. Third person Limited- Narrator speaks in depth about only one character in the story. Third Person Omniscient- narrator takes on a God-like quality. He/She goes in depth about all characters in the story. Plot Character Theme

21 Using context clues means
Using what’s already in your head and connecting it to what’s in the text. Look for small clues that indicate what the word may mean. These clues are usually in the sentence that contains the word, and the sentences before and after the word.

22 For example: “I believe that all people should be treated the same. That’s why I am an advocate for equal rights”. Use the clues in the sentence to determine what the word advocate means

24 Are there any questions?

28 Review continued… 5.What is the difference between a short story and a novel? 6.How do Short Story titles help readers understand more about the story itself? 7.Instead of using a dictionary, what can a reader do to figure out unfamiliar words? Explain the process.

30 1.What are the elements of literature?

31 2.How are groups of literature categorized?

32 3.Which methods do author’s use to describe characters?

34 5.What is the difference between a short story and a novel?

35 6.How do Short Story titles help readers understand more about the story itself?

36 7.Instead of using a dictionary, what can a reader do to figure out unfamiliar words? Explain the process. 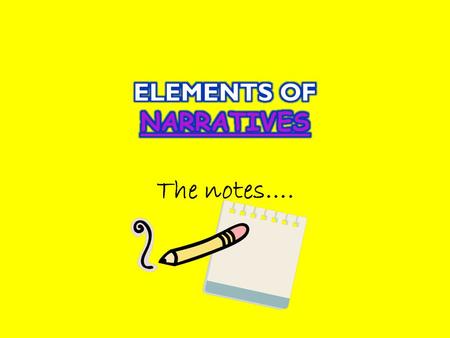 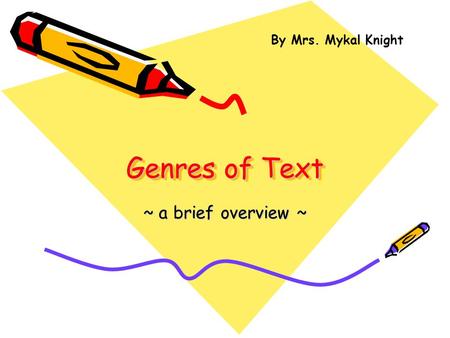 Genres of Text ~ a brief overview ~ By Mrs. Mykal Knight. 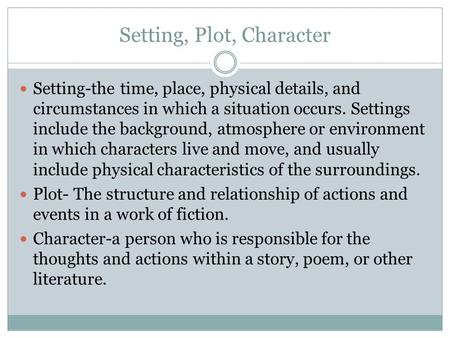 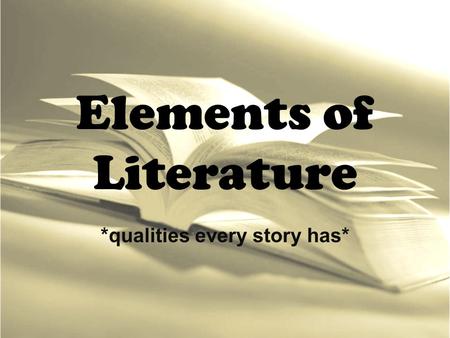