2 Sun The sun heats all the planets around it.
The sun is actually a star.

3 Mercury Mercury has low gravity.
Daytime on Mercury is over 400 degrees.

4 Venus Venus is about the same size as earth.
Volcanoes and Mountains cover Venus.

6 Mars Mars is called the red planet.
Scientists think that there used to be water on Mars.

8 Jupiter Jupiter is the first outer planet.
You could fit 1300 Earths in Jupiter.

9 Saturn Saturn is the 2nd largest planet.
The rings of Saturn are made of ice crystals.

10 Uranus Uranus is the first planet to be discovered by a telescope.
Uranus spins on its side like a barrel. Li, l]

11 Neptune Neptune is the 8th planet from the sun.
Earth is four times less in size than Neptune

12 Pluto Pluto is not a planet; it’s a dwarf planet.
Pluto’s moon is almost its size.

13 Comets Comets are made of ice and rocks.
The reason comets have their tales is that they come close to the sun and melt.

14 I Hoped you liked my slide show 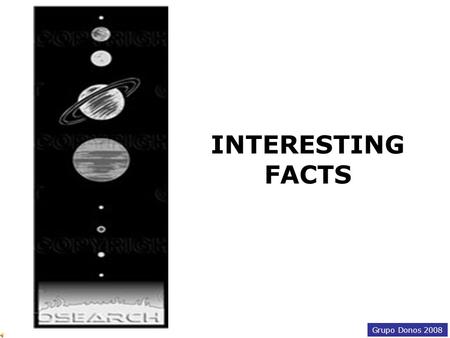