3 Mercury Mercury is the 1st planet from the sun.
It take 180 days to go around.

4 Venus It is the 2nd planets for the sun.
Venus is the 2nd hottest planet.

5 Earth You can live on it. Earth is the 3rd planet.

9 Saturn Saturn has at least 31 moons.
Saturn’s rings are made of ice, dust, and rocks.

10 Uranus Uranus is the 6th planet from the sun. Uranus has rings.

11 Neptune Neptune is so far away that it took the probe Voyager 212 year to reach it. Neptune is a sea blue color due to the methane gas its atmosphere.

12 Pluto Pluto is smaller than the Earth’’ moon.
The color of Pluto is reddish brown. 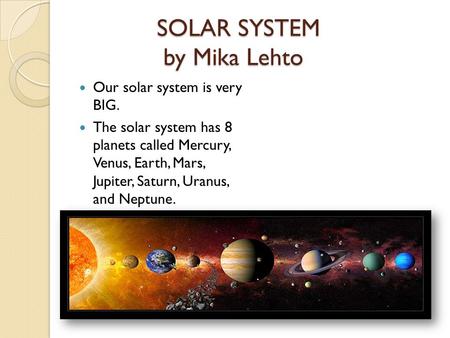