7 HMD Head Mounted Display
This is a helmet or face mask that holds the visual and auditory displays. In immersive system a large projection displays are used to create a virtual background such as room or cave.

9 Tele Presence VIRTUAL REALITY
Telepresence is variation to visualize complete computer generated world. This is a technology which links the remote sensors with the senses of human operator in real world. Fire fighters uses remote controlled vehicles to operate some dangerous conditions. This vehicles are equipped with Telepresence systems.

11 Mixed VIRTUAL REALITY Merging the Telepresence and Virtual reality systems gives the mixed virtual reality or seamless simulation. A fighter pilot can see computer generated maps and scenes data displays in there fancy HMD that is Helmet visor or cockpit displays. In this type of virtual reality user can see, Hear virtual world and can operate that world by using Telepresence.

16 Image Generators One of the most time consuming task in Virtual Reality is generation of images. Fast computer graphics opens a large range of applications aside from virtual reality. So there is a market demand for graphic acceleration for long while. There are number of vendors selling image generator cards for PC level machines which ranges from $2000 to $10000

18 Manipulation & control devices
One key element for interaction to the virtual world that is tracking the position of real world objects such as head or hand. The conventional control devices are mouse, trackball, or joystick Some common used VR control device is Instrumented Glove. The use of Glove is to manipulate objects in the computer by using inbuilt sensors which fitted on fingers for tracking.

20 Stereo Vision Stereo vision is also included in virtual reality system. This is accomplished by creating two different images of the world one for each eye. The images can projected through differently polarized filters this filters are placed in front of our eyes. When this images are shown on this vision in rapid speed then brain fuses this two images in a single image & can get 3d experience.

23 Architecture Designing
For many years virtual reality has been used to establish models of architectural models and buildings before construction begins. It can also be used to reconstruct building which is collapsed or damaged or to determine how this happened & the steps needed prevent the situation in the future.

25 Medical Field The medical field uses virtual reality in many ways.
The most common implementation of the technology is to combine images provided by other scans and merge them to present the details, using medical imaging technology This helps doctors diagnose problems without performing surgery.

27 Engineering & designing Field
This lathe is used to train apprentices. Unlimited free material and no clean up! © 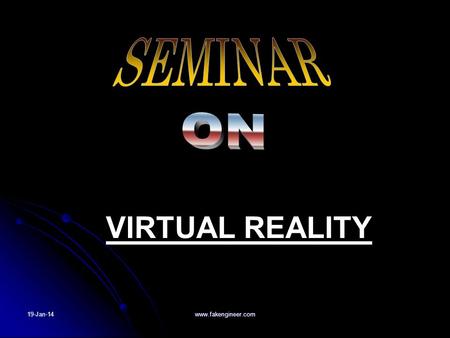 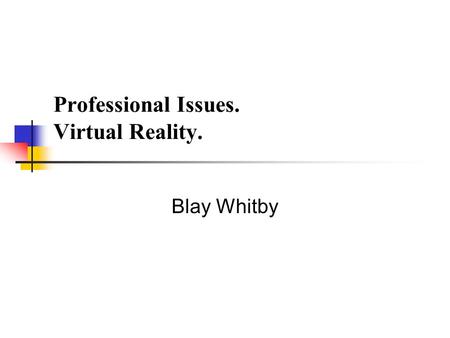 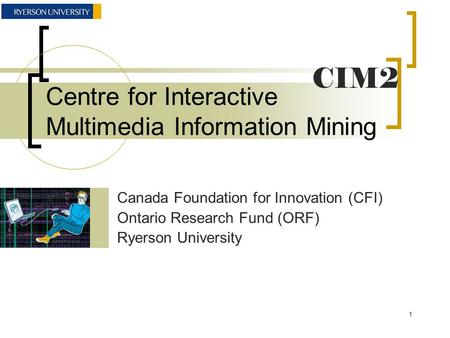 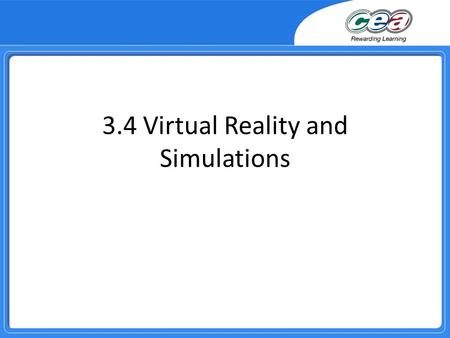 3.4 Virtual Reality and Simulations. Overview Describe the differences between virtual reality and simulation. Demonstrate and apply knowledge and understanding. 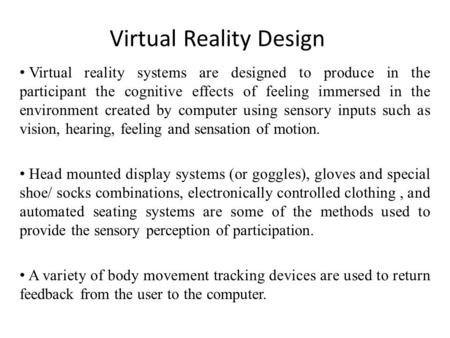 Virtual Reality Design Virtual reality systems are designed to produce in the participant the cognitive effects of feeling immersed in the environment. 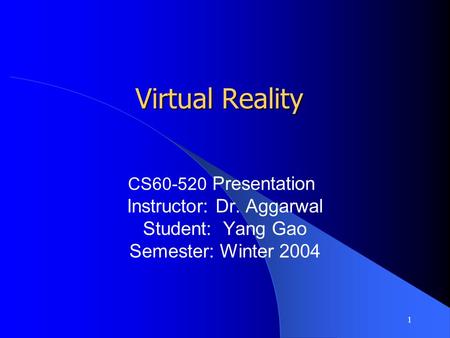 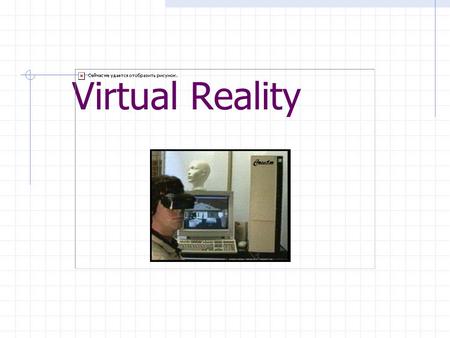 Virtual Reality. What is virtual reality? a way to visualise, manipulate, and interact with a virtual environment visualise the computer generates visual, 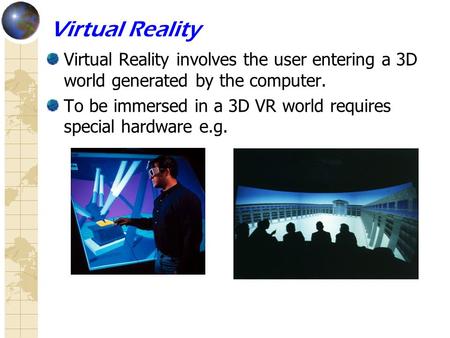 Virtual Reality Virtual Reality involves the user entering a 3D world generated by the computer. To be immersed in a 3D VR world requires special hardware. 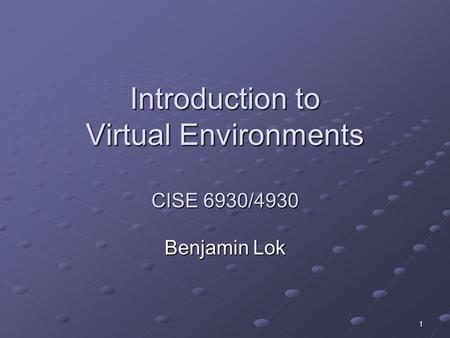 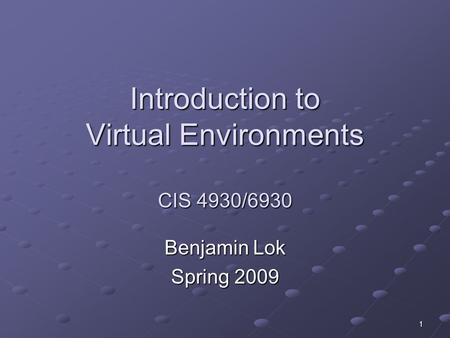 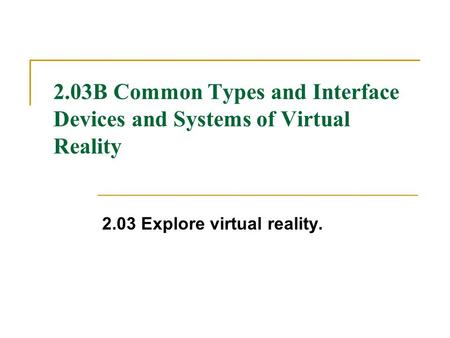 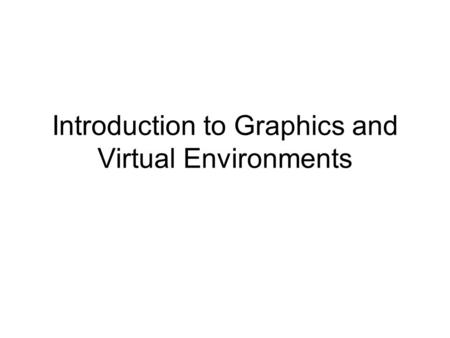 Introduction to Graphics and Virtual Environments. 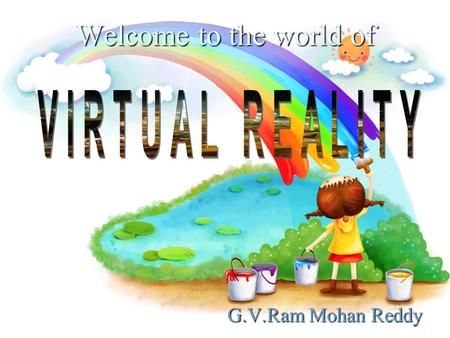 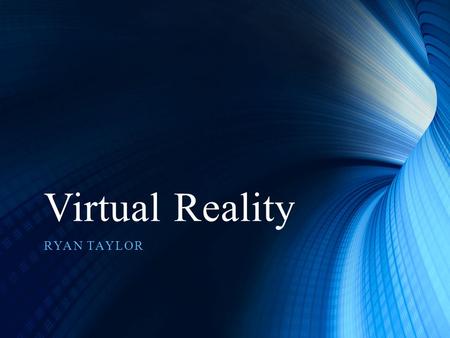 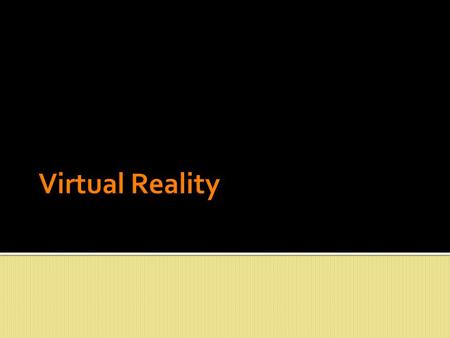 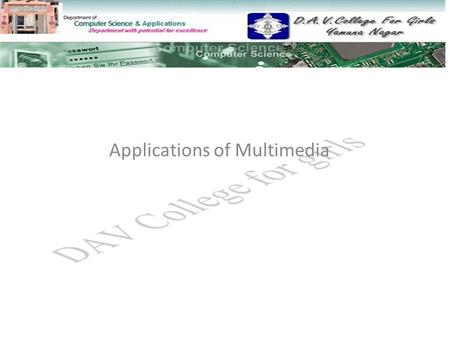 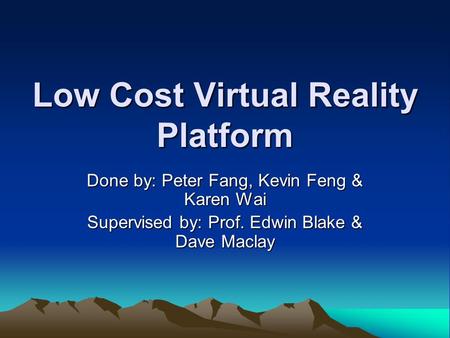 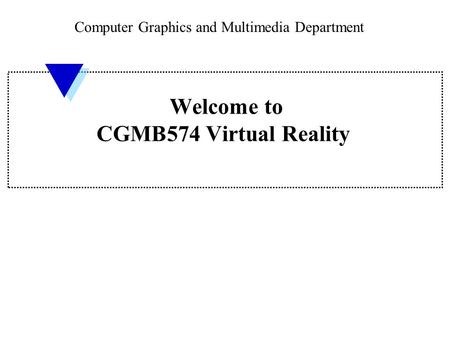 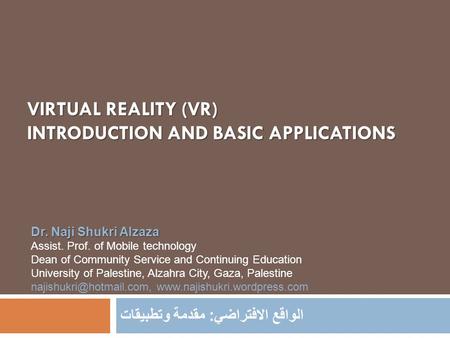 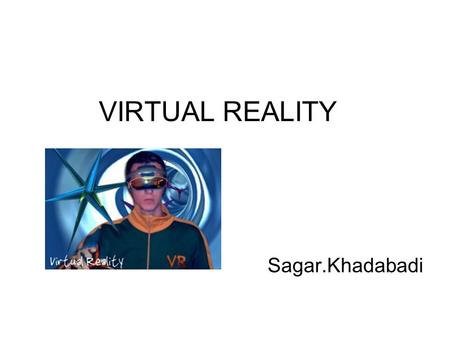 VIRTUAL REALITY Sagar.Khadabadi. Introduction The very first idea of it was presented by Ivan Sutherland in 1965: “make that (virtual) world in the window.