3 Nonrenewable energy resource *  Is used much faster than it can be replaced. We could run out  Natural resources that cannot be replaced in nature  Most of the energy comes from fossil fuel.  Examples: Fossil Fuels (coal, petroleum, natural gas) diamonds, metals, other minerals

4 Fossil fuels *  Energy that have formed over millions of year from the decay of ancient plants and animals.  Examples: coal, petroleum, natural gas,

5 Coal  Is a solid that is formed from decayed plants millions of years ago  Burned in many power plants to boil water  A spinning turbine turns a generator, which changes ______________ Energy to electrical energy.  21% of the US Energy Source *

10 Nuclear Energy *  Energy stored in the nucleus of an atoms  Nuclear power plants produce electricity, and use uranium (nonrenewable) as fuel  Advantages  No air pollution  Disadvantages  Radioactive materials could be released into the environment. Very harmful to humans and other living things.  9% of US Energy Source

13 Photovoltaic cell  Solar cell  Can change light energy into electricity  Require sunlight so during the night they use a power company grid.  Some buildings have solar batteries that store the energy during the day and use it at night.

14 Solar panels/reflectors  Solar panels in an open area that collect sunlight  Solar reflector reflects and focuses sunlight into a pipe. The pipe becomes heated, they energy is used to turn water to steam.

18 Hydropower  Moving water  Water moves turbines which move electric generator, produce electricity  A waterfall is a good location to place a hydroelectric power plant because of the large. Other places must have a dam  3% of US Energy Source

23 Connections *  Air can be cleaned and purified by plants during the process of photosynthesis as they remove carbon dioxide from the air and replace it with oxygen.  The water cycle allows Earth’s water to be used over and over within the environment.  Topsoil is formed to replace soil that has been carried away by wind and water (although new soil forms very slowly).  Trees and other new plants grow to replace those that have been cut down or died.  Animals are born to replace animals that have died.

24 Conservation *  hat natural resources can be depleted or used to the point that they are in effect no longer available.  Conservation involves preventing the loss of a resource by way of thoughtful management of it.

25 Consequences *  that freshwater can be depleted because of increased demands for water on account of population shifts. This results in water not being available or not being sufficient to meet demands.  Soil can be lost because it is left bare of vegetation and allowed to erode depletes the land of the fertile topsoil needed for plant growth in that area.  If living resources, such as trees, are removed without being replanted, this can contribute to environmental changes in the land, air, and water in that area that leads to negative consequences.

28 reduce, reuse, recycle*  Reduce = making a decision to not use a resource when there is an alternative  such as walking or riding a bicycle rather than traveling in a car.  Reusing = finding a way to use a resource again without changing it or reprocessing it  such as washing a drinking glass rather than throwing away plastic or Styrofoam.  Recycling = reprocessing a resource so that the materials can be used again as another item,  such as metals, glass or plastics being remade into new metal

29 Which of the following is a nonrenewable energy resource?  A. coal  B. wood  C. wind  D. biomass

31 Which of the following does not release carbon dioxide when it is used as an energy resource?  A. petroleum  B. ethanol  C. coal  D. Wind

33 Most of the energy is used in the US comes from  A. oil and natural gas  B. coal and nuclear energy  C. natural gas and biomass  D. Hydropower and oil

34 Which of the following is the most reliable prediction about the future of some nonrenewable energy sources?  A. Enough new coal and oil will form to meet our needs in the near future.  B. In the near future, people will no longer need to conserve fossil fuels  C. Fossil Fuel supplies wil decrease, and the cost of fossil fuels will increase  D. Coal will be in short supply, but oil will still be widely available for our use.

35 The wise use of natural resource is called  A. production  B. conservation  C. biomass  D. restoration 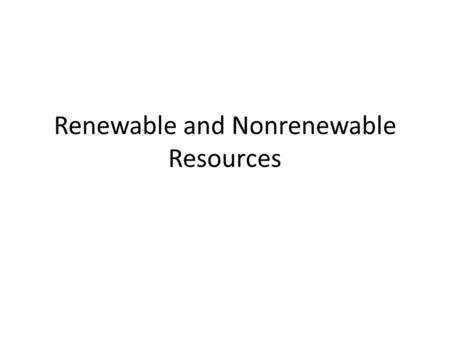 Renewable and Nonrenewable Resources. Resources What we require to live Natural Resources – Resources we get from earth – Examples: Air, Soil, Minerals,