2 What are natural resources?
Natural Resources provide materials and energy. People use natural resources to make tools, build cities, heat their homes, and make their lives more comfortable. Natural resource: any energy source, organism, or substance found in nature that people use. People also know that there are costs AND benefits in using natural resources; for example, coal produces heat but also smoke that pollutes the air.

4 What are fossil fuels? Fossil Fuels supply most of society’s energy.
Fossil fuel: a nonrenewable energy source formed from ancient plants and animals buried in Earth’s crust for millions of years. Includes oil, coal, and natural gas. The energy in fossil fuels represents a form of stored sunlight, since ancient organisms depended on the sun. Fossil fuels burn easily and produce a lot of heat. They are used to run most of the power plants that generate electricity. Burning fossil fuels produces excess carbon dioxide, harmful acids, and other forms of pollution.

5 What are resources used for?
Fossil fuels, minerals, and plants supply materials for modern products. Many of the products you use come from fossil fuels. Ex. Oil is broken down into different parts that are used to make plastics. Minerals are found in cars, airplanes, tools, wires, and computer chips. Plants are used to make another large group of products. Ex. Wood is used to build homes and to make furniture, utensils, and paper. Plants are also rich sources of dyes, fibers, and medicines. Fossil fuels must be burned to generate power for the factories and businesses that make these products. Factory waste can pollute air, water, and soil.

7 What is recycling? Recycling involves recovering and extending natural resources. Recycling: The reusing of materials that people would otherwise throw away. Ex. Glass, aluminum cans, certain plastics, paper Not every item can be recycled or reused. Recycling is only part of the solution to our resource problem. Recycling takes time, energy, and money, but can help extend available resources, and protect human health and the environment.

9 What is nuclear fission?
Nuclear fission: the process in which the nucleus of a radioactive atom is split, forming lighter elements and releasing a huge amount of energy. Nuclear power plants use uranium atoms as fuel. When a uranium nucleus splits, it forms 2 smaller nuclei and releases a few neutrons and a large amount of energy in the form of light and heat. Although nuclear fission produces a lot of energy, it also produces radioactive waste that can cause death and disease if living things are exposed to it long enough. Nuclear waste will remain radioactive for thousands of years, so countries using it face the challenge of storing it safely.

10 How do we use renewable resources?
Renewable resources are used to produce electricity and fuel. Sources of renewable energy are moving water, wind, Earth’s internal heat, sunlight, living matter, and hydrogen. These energy sources are in unlimited supply and usually produce electricity or heat with little or no pollution. These energy sources also help to preserve the environment and protect human health. Renewable resources provide only a small percentage of energy used because these resources can’t produce enough energy to pay for the cost of developing them on a large scale.

11 Renewable Energy: Hydroelectric Power
Hydroelectric energy: electricity produced by moving water. People can use flowing water to produce electricity. Because hydroelectric power doesn’t burn any fuel, it produces no pollution. Building dams can cause problems for the environment by destroying wildlife habitats, interfering with migration of fish, and making it harder to raise crops and livestock (some areas at the end of the river may receive less water).

12 Renewable Energy: Solar Power
Solar cells were created to trap the sun’s energy. Solar cell: a special layered device that converts light energy to electricity. In a solar cell, when sunlight strikes the cell, electrons move from the lower layer to the upper layer, producing an electrical current. Solar cells can be wired together in solar panels. Sunlight is an unlimited source of clean energy but current methods of collecting sunlight are expensive and somewhat inefficient.

14 Renewable Energy: Wind Energy
For thousands of years, people have used wind energy to move ships, grind grain, and pump water. Today, people use wind energy to generate electricity. The modern windmill is made of metal and plastic. The blades turn a set of gears that drives the generator to produce electricity. Wind farms are areas with hundreds of windmills. Wind energy is clean and renewable, but depends on strong winds blowing most of the time and wind farms take up a lot of land.

16 Renewable Energy: Hydrogen Fuel Cells
Hydrogen is the simplest atom, is a flammable gas, and must be handled with care. Hydrogen is used in a hydrogen fuel cell, which is a device that produces electricity by separating hydrogen into protons and electrons. Hydrogen fuel cells are used to supply electrical energy on spacecraft and space stations and is being tested on other forms of transportation. Hydrogen is a clean source of energy and produces water and heat as byproducts. However, hydrogen fuel is very expensive and takes a great deal of energy, time, and money.

17 What is Global Warming? The average temperatures of the Earth are increasing, and the rate of increase is getting faster and faster. It is caused by increase greenhouse gases (like carbon dioxide) in the atmosphere that trap heat and cause the Earth to heat up. The Earth does go through natural warming and cooling cycles, but the current warming is happening too fast and is too extreme to be natural. 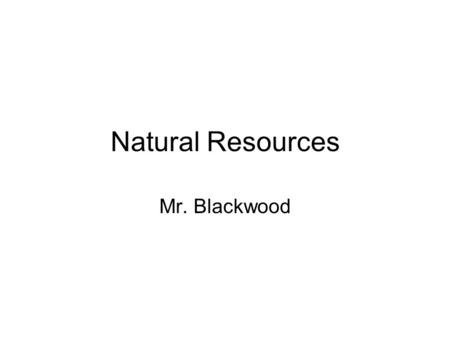