5 Renewable Resources A renewable resource is any natural resource that is recycled or replaced constantly by nature. The sun supplies a constant supply of heat & light Rain fills lakes and streams with water Plants carry out photosynthesis and put oxygen back into the air

6 Renewable Resources Renewable resources can be recycled or replaced, but they are in short supply (sometimes) Rain may not refill lakes, rivers, or streams and water may become short in supply In desert regions water and other resources are scarce

7 Nonrenewable Resources
Natural resources that are used up more quickly than they can be replaced by natural processes are nonrenewable resources. Earth’s supply of these is limited Plastics, paints, and gasoline are made from an important nonrenewable resource called petroleum formed mostly from remains of microscopic marine organisms buried in Earth’s crust. It takes hundreds of millions of years to form

9 Fossil Fuels Coal, oil, and natural gas are some nonrenewable resources that supply energy. Fossil fuels are fuels formed in Earth’s crust over hundreds of millions of years All types of transportation that use gasoline, diesel fuel, and jet fuel use oil Coal is used in power plants to produce electricity Natural gas is used in manufacturing for heating, cooking, and sometimes fuel

11 Conserving Fossil Fuels
How can we conserve fossil fuels? Turn lights, appliances, etc off when not using Reduces electricity, which is produced in power plants that fossil fuels Taking public transportation or riding in car pools reduces exaust Walking or riding bicycles

12 Alternatives to Fossil Fuels
Developing alternative uses to fossil fuels is also a way to conserve Using water, wind, and solar or atomic energy is an alternative Wind and solar energy are so plentiful that they are considered inexhaustible resources

14 Water Power Water is a renewable energy source that can be used to generate electricity Hydroelectric power is electricity that is produced when the energy of falling water is used to turn turbines of an electric generator Does not produce any pollution It does however, produce environmental concerns Requires the building of a dam so water levels can be raised Many acres behind the dam are flooded

20 Solar Energy Most inexhaustible source of energy on Earth
Another alternative to fossil fuels In the northern hemisphere parts of buildings (that face south) receive large amounts of sunlight through very large windows Floors and walls are made of materials that absorb heat during the day During the night the stored heat is released slowly, keeping the building warm

21 Solar Energy How do solar powered calculators and spacecrafts use the sun for electricity? Use cells (photovoltaic) to turn sunlight into electric current PV cells are small and easy to use Only produce energy in light Batteries must also be used in darkness PV cells are too expensive for generating large amounts of electricity Improvements are being made to make them more widely available

22 What have you learned? What are natural resources?
Compare and contrast nonrenewable and renewable resources. Describe advantages and disadvantages of using nuclear power. Describe two ways solar power can be used to reduce fossil fuel use. 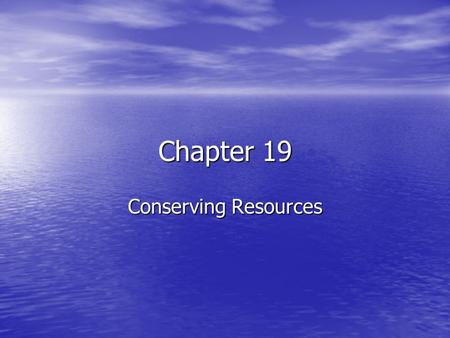