2 Directions Take out a piece of notebook paper and take notes on this ppt. Write only the underlined phrases. Highlight, or underline, the headings of each section. Label it #12 in your Africa folder

3 African’s are Sick & Tired of Europeans Ruling Over Them..
INDEPENDENCE Europeans ruled Africa for several decades Many African’s hated this Feelings of NATIONALISM (pride toward your country) started to take over Nationalist movements got African’s excited about taking their land back = African Nationalist Movement fought for independence! Some movements were peaceful, while many were violent

4 Pan-African Movement Stressed that all black Africans must see themselves as one people, in order to gain independence & overcome the effects of European colonization. Pan African Movement helped many African nations gain their independence and united the African Continent for a better life, economy, & government...to develop a united political identity.

5 NIGERA’S Nationalist Movement
Nigeria Is home to many different ethnic groups. After the Berlin Conference Great Britain was given control of Nigeria. The British separated Nigeria into TWO colonies. Many ethnic groups were opposed to being part of the same country . These divisions between ethnic groups led to different treatment by Brits. By the 1940s, Nigerians started many groups to fight British rule. Many Nigerians admired the British because of their education in England. Nigerians believe that the only way to have rights was to be free of European rule.

6 Nigeria Continued These groups pushing for independence became political parties that worked for Nigerian independence. By late 1940s and 50s, the British let Nigerians elect their own government. In 1957 they elected Abubkar Tafawa Balewa as their Prime Minister On October 1, 1960 Nigeria was granted its independence from Britain.

8 Kenya Nationalist Movement
Kenya was colonized by England & many people in Kenya disliked the British being there. In opposition to British rule they organized a group known as the Mau Mau ( ). Mau Mau- a secret organization that believed the only way to win Kenyan rights and independence was through the use of force & violence. In 1954 the British mostly defeated the Mau Mau, however violence between the two groups continued until 1960. Thousands of people were killed during fighting, only about 100 were European.

12 Homelands There were established “homelands” for blacks; Homelands were: poor, crowded areas far away from the cities where the blacks had to live. Homelands often did not have running water and electricity – (None). Black South Africans could only leave their homeland if they were going to work for a white person. Blacks forced to carry pass books (similar to a passport) at all times or they would go to prison 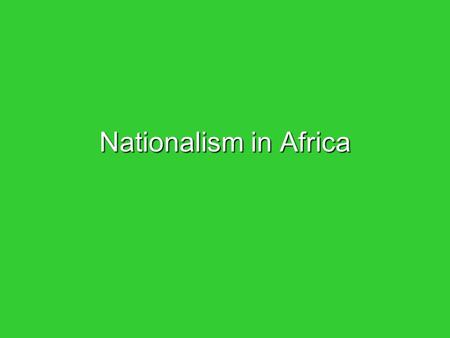