2 Sir. Isaac Newton Newton, Sir Isaac (1642-1727), English natural philosopher, generally regarded as the most original and influential theorist in the history of science. In addition to his invention of the infinitesimal calculus and a new theory of light and color, Newton transformed the structure of physical science with his three laws of motion and the law of universal gravitation.

5 1 st Law cont. This simply means that in nature, nothing starts or stops moving until some outside force causes it to do so An airplane at rest on a ramp will remain at rest, unless a force strong enough to overcome its inertia is applied

7 But what would happen if the ladder was negligently strapped to the truck in such a way that it was free to slide along the top of the truck and the truck stopped?

9 Inertia Inertia: the resistance an object has to change in its state of motion

10 Friction Galileo, a premier scientist in the seventeenth century, developed the concept of inertia. Galileo reasoned that moving objects eventually stop because of a force called friction.

11 Friction cont. In experiments using a pair of inclined planes facing each other, Galileo observed that a ball will roll down one plane and up the opposite plane to approximately the same height.

12 Friction Cont If smoother planes were used, the ball would roll up the opposite plane even closer to the original height. Galileo reasoned that any difference between initial and final heights was due to the presence of friction.

14 An object which is not changing its velocity is said to have an acceleration of 0 m/s/s. Thus, we could provide an alternative means of defining inertia: Inertia: tendency of an object to resist accelerations

15 Equilibrium First consider a physics book at rest on a table top. There are two forces acting upon the book. One force - the Earth's gravitational pull exerts a downward force. The other force - the push of the table on the book (sometimes referred to as a normal force) - pushes upward on the book.

17 Unbalanced Forces Now consider a book sliding from left to right across a table top.

18 Unbalanced Forces Cont. The force of gravity pulling downward and the force of the table pushing upwards on the book are of equal magnitude and opposite directions. These two forces balance each other. Yet there is no force present to balance the force of friction. As the book moves to the right, friction acts to the left to slow the book down. There is an unbalanced force; and as such, the book changes its state of motion. The book is not at equilibrium and subsequently accelerates.

19 The mass of an object refers to the amount of matter that is contained by the object; the weight of an object is the force of gravity acting upon that object.

20 What is Force? A force is a push or pull acting upon an object as a result of its interaction with another object.

22 Gravity Force F grav The force of gravity is the force with which the earth, moon, or other massively large object attracts another object towards itself. By definition, this is the weight of the object. All objects upon earth experience a force of gravity which is directed "downward" towards the center of the earth. The force of gravity on earth is always equal to the weight of the object as found by the equation: Fgrav = m * g where g = 9.8 m/s2 (on Earth) and m = mass (in kg) (Caution: do not confuse weight with mass.)

24 Normal Force F norm The normal force is the support force exerted upon an object which is in contact with another stable object. For example, if a book is resting upon a surface, then the surface is exerting an upward force upon the book in order to support the weight of the book. On occasions, a normal force is exerted horizontally between two objects which are in contact with each other. For instance, if a person leans against a wall, the wall pushes horizontally on the person.

25 Friction Force F rict The friction force is the force exerted by a surface as an object moves across it or makes an effort to move across it. There are at least two types of friction force - sliding and static friction. Thought it is not always the cast, the friction force often opposes the motion of an object. For example, if a book slides across the surface of a desk, then the desk exerts a friction force in the opposite direction of its motion.

26 Friction Force F rict Friction results from the two surfaces being pressed together closely, causing intermolecular attractive forces between molecules of different surfaces. As such, friction depends upon the nature of the two surfaces and upon the degree to which they are pressed together. The maximum amount of friction force which a surface can exert upon an object can be calculated using the formula

27 Air Resistance Force F air The air resistance is a special type of frictional force which acts upon objects as they travel through the air. The force of air resistance is often observed to oppose the motion of an object. This force will frequently be neglected due to its negligible magnitude (and due to the fact that it is mathematically difficult to predict its value). It is most noticeable for objects which travel at high speeds (e.g., a skydiver or a downhill skier) or for objects with large surface areas.

29 Spring Force F spring The spring force is the force exerted by a compressed or stretched spring upon any object which is attached to it. An object which compresses or stretches a spring is always acted upon by a force which restores the object to its rest or equilibrium position. For most springs (specifically, for those which are said to obey "Hooke's Law"), the magnitude of the force is directly proportional to the amount of stretch or compression of the spring. 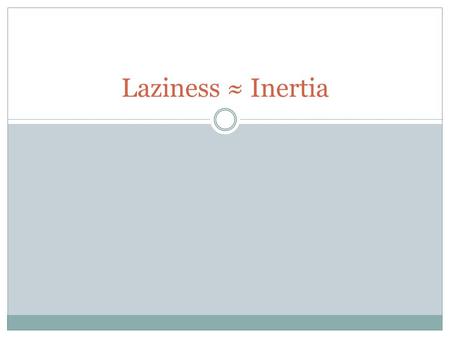 Laziness ≈ Inertia. For centuries physics slept in Aristotle’s ( BC) shadow. 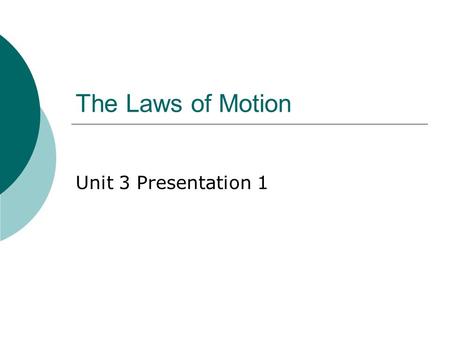 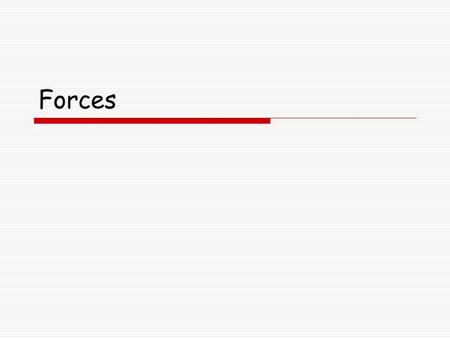