3 Radiation electromagnetic spectrum all of the frequencies or wavelengths of electromagnetic radiation The distance from any point on a wave to the identical point on the next wave, for example from crest to crest, is called the wavelength of a wave. The various types of radiation differ in the length of their waves.

4 Radiation, continued The diagram below shows the the varying waves of the electromagnetic spectrum.

5 The Atmosphere and Solar Radiation
As solar radiation passes through Earth’s atmosphere, the atmosphere affects the radiation in several ways. Most of the solar rays that reach the lower atmosphere, such as visible and infrared waves, have longer wavelengths.

7 The Atmosphere and Solar Radiation
Reflection albedo the fraction of solar radiation that is reflected off the surface of an object. The amount of energy that is absorbed or reflected depends on characteristics such as color, texture, composition, volume, mass, transparency, state of matter, and specific heat of the material on which the solar radiation falls. The intensity and amount of time that a surface material receives radiation also affects how much energy is reflected or absorbed.

8 Absorption and Infrared Energy
Solar radiation that is not reflected is absorbed by rocks, soil, water, and other surface materials. Gas molecules, such as water vapor and carbon dioxide, in the atmosphere absorb these infrared rays. The absorption of thermal energy from the ground heats the lower atmosphere and keeps Earth’s surface much warmer than it would be if there were no atmosphere.

9 Absorption and Infrared Energy
The Greenhouse Effect greenhouse effect the warming of the surface and lower atmosphere of Earth that occurs when carbon dioxide, water vapor, and other gases in the air absorb and reradiate radiation Earth’s atmosphere slows the escape of energy that radiates from Earth’s surface.

10 Absorption and Infrared Energy
Human Impact on the Greenhouse Effect Generally, the amount of solar energy that enters Earth’s atmosphere is about equal to the amount that escapes into space. However, human activities, in addition to natural causes, are changing this balance and are causing the average temperature of the atmosphere to increase. Increases in the amount of carbon dioxide may intensify the greenhouse effect and may cause Earth to become warmer in some areas and cooler in others.

11 Absorption and Infrared Energy
The diagram below shows the greenhouse effect and the latitude and seasons.

12 Variations in Temperature
Radiation from the sun does not heat Earth equally at all places at all times. Earth’s surface must absorb energy for a time before enough energy has been absorbed and reradiated from the ground to change the temperature of the atmosphere. The temperature of the atmosphere in any region on Earth’s surface depends on several factors, including latitude, surface features, and the time of year and day.

14 Variations in Temperature
Water in the Air and on the Surface Because water vapor stores heat, the amount of water in the air affects the temperature of a region. Land areas close to large bodies of water generally have more moderate temperatures The wind patterns in an area also affect temperature.

17 Convection convection the movement of matter due to differences in density that are caused by temperature variations; can result in the transfer of energy as heat Convection occurs when gases or liquids are heated unevenly. The continuous cycle in which cold air sinks and warm air rises warms Earth’s atmosphere evenly.

18 Convection The atmospheric pressure is lower beneath a mass of warm air. As dense, cool air moves into a low-pressure region, the less dense, warmer air is pushed upward. These pressure differences, which are the result of the unequal heating that causes convection, create winds. 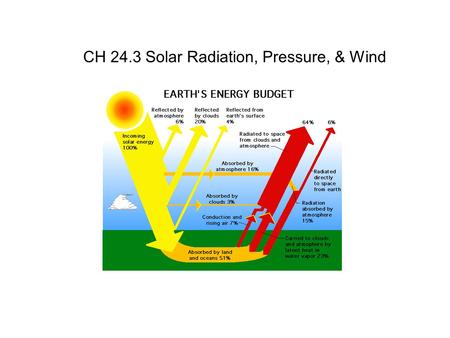 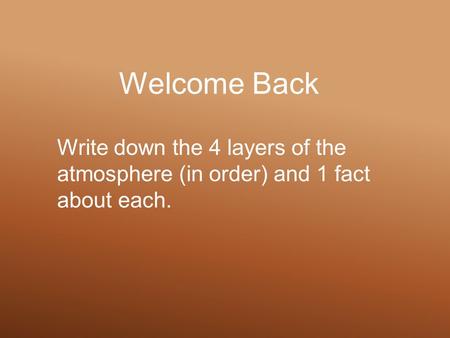 Welcome Back Write down the 4 layers of the atmosphere (in order) and 1 fact about each.