Presentation on theme: "Early Models of the Atom History of the Atom Standard Atomic Notation Some Intro Songs for your entertainment: The Atom Song:"— Presentation transcript:

2 HISTORY OF THE ATOM 460 BC Democritus develops the idea of atoms - ancient Greek philosopher -suggested that matter was made up of tiny particles called: - his theory was not accepted for 2000 years ATOMOS (greek for indivisible)

3 HISTORY OF THE ATOM 1808 John Dalton - working with gases, reconsidered Democritus’ theory that particles are indivisible - Described matter as tiny spheres that were able to bounce around with perfect elasticity and called them: ATOMS

4 History of the Atom Dalton’s Atomic Model: 1)All matter is made up of atoms, which are particles too small to see 2)Each element has its own kind of atom, with its own particular mass 3)Compounds are created when atoms of different elements link to form molecules 4)Atoms cannot be created, destroyed, or subdivided in chemical changes

5 Problem with Dalton’s Theory: – unable to explain the Electrical nature of matter: Like charges repel Unlike charges attract

6 History of the Atom 1879 William Crookes -worked with cathode ray tubes -beam of particles was attracted to a positive plate -these particles were called: ELECTRONS - have a negative charge

7 History of the Atom 1886 Eugen Goldstein -most samples of matter are NOT charged -the atom must contain positively charged particles -used cathode ray tubes to prove this and they were called: PROTONS

9 HISTORY OF THE ATOM Thompson develops the idea that an atom was made up of electrons scattered unevenly within an elastic sphere surrounded by a soup of positive charge to balance the electron's charge 1904 like plums surrounded by pudding. PLUM PUDDING MODEL Or RAISIN BUN MODEL

10 HISTORY OF THE ATOM 1910 Ernest Rutherford - designed an experiment using RADIUM (this element spits out positive ALPHA particles) - he placed a piece of gold foil in front of the beam, surrounded by a screen to detect the path of the particles - they found that although most of them passed through, about 1 in 10,000 hit

11 HISTORY OF THE ATOM gold foil helium nuclei They found that while most of the particles passed through the foil, a small number were deflected and, to their surprise, some particles bounced straight back. helium nuclei

14 History of the Atom 1932 Chadwick -Nucleus contains another particle which has NO charge (neutral) called a: NEUTRON - This particle and the proton have approximately the same mass, but the electron is very small. It takes 1837 electrons to have the same mass as ONE proton or neutron.

15 HISTORY OF THE ATOM 1913 Niels Bohr studied under Rutherford at the Victoria University in Manchester. Bohr refined Rutherford's idea by adding that the electrons were in orbits. Rather like planets orbiting the sun. With each orbit only able to contain a set number of electrons.

21 ATOMIC STRUCTURE There are two ways to represent the atomic structure of an element or compound; 1.Electronic Configuration 2. Bohr-Rutherford Diagrams

22 ELECTRONIC CONFIGURATION With electronic configuration, elements are represented numerically by the number of electrons in their shells and number of shells. For example; N Nitrogen 7 14 2 in 1 st shell 5 in 2 nd shell configuration = 2, 5 2 + 5 = 7

Download ppt "Early Models of the Atom History of the Atom Standard Atomic Notation Some Intro Songs for your entertainment: The Atom Song:" 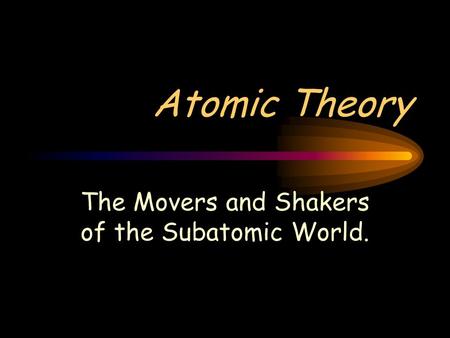 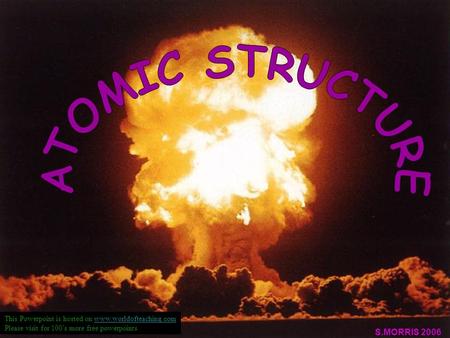