2 Frida Kahlo was born in Coyoacan, Mexico in 1907.
Her father was an artist, and he taught Frida how to paint when she was a little girl. Her father was German, her mother of native descent. When she was 7 years old, she was stricken with polio and had to stay in bed for 9 months. That’s when Frida taught herself how to draw.

3 The Accident, 17 September 1926
When Frida was only 18 years old, she was in a terrible bus accident which left her in constant pain for the rest of her life. When Frida was 18, she was hurt in a bus accident. Her spine, pelvis, and foot were broken. After the accident, Frida was in constant pain. She found the courage to live by painting. She painted the things that were important to her - special days, dreams, and the world of her imagination. Frida painted with the same bold courage that helped her to survive. The Accident, 17 September 1926

5 Las dos Fridas (1939) Frida’s personality originated from putting together fragments of self (multi-personality) like putting together a piece of puzzle; which is like the combination of her body parts reattached after the accidents and various surgeries

7 Frida and Diego Rivera Diego Rivera, a famous muralist, met Frida when he visited her school. Their marriage consisted of love, affairs with other people, creative bonding, hate, and a divorce in 1940 that lasted only for one year. Their marriage has been called the union between an elephant and a dove, because Diego was huge and very fat, and Frida was small (a little over 5 feet) and slender. Despite Diego's affairs with other women (one was with Frida's sister), he helped in many ways. He suggested to Frida that she should begin wearing the traditional Mexican clothing, which consisted of long, colorful dresses and exotic jewelry. This, along with Frida's thick, connecting eyebrows, became her trademark. He also loved her work and was her greatest admirer. Frida, in turn, was Diego's most trusted critic, and the love of his life. 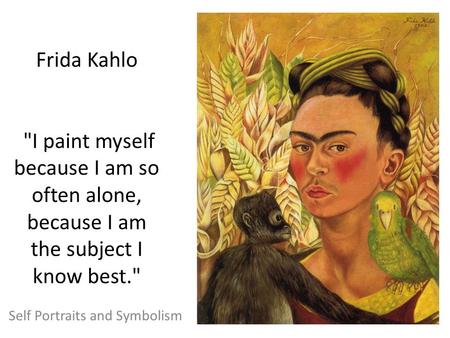 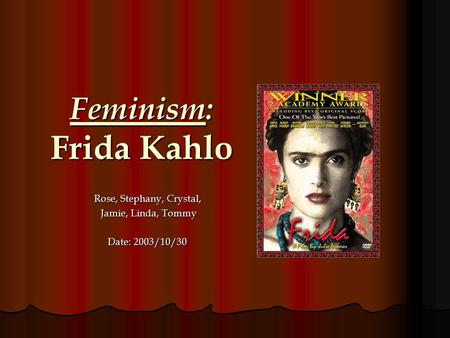 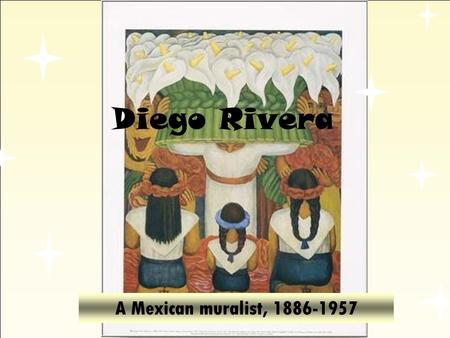