1 Fun Facts about Frida Kahlo: How much do you know? Megan Johnson 5 th Period AP Literature 10/5/12

2 When Frida Kahlo was born, what name was she given? Magdalena. She was born Magdalena Carmen Frieda Kahlo Calderon on July 6 th 1907.

3 Frida Kahlo did not originally intend to become an artist. As a polio survivor, what program did she enter at 15? A premedical program in Mexico City.

4 What tragic accident occurred when Kahlo was 18, causing her problems for the rest of her life? A trolley accident. She ended up with a broken spinal column, a broken collarbone, broken ribs, a broken pelvis, 11 fractures in her right leg, a dislocated and crushed right foot, and her shoulder was out of joint.

5 Of all Frida’s works, what is she most famous for? Self-portraits. She once said, “I paint myself because I am so often alone and because I am the subject I know best."

6 What art movement was Kahlo often identified with by its members? Surrealism. She never classified herself with a group and detested being put in one.

7 Diego and Frida were married in what year? 1929. Diego married Frida on August 21, 1929. He wasn’t faithful in their marriage, cheating on Frida with many women.

8 Frida and Diego’s marriage was often compared to what? A union between a dove and an elephant. This was because Diego was very huge and fat and Frida was very small (a little over five feet) and slender.

9 In 1928, Frida painted a portrait of a woman who went on to have an affair with her husband, Diego. Who was the woman? Her sister Cristina. Cristina modeled for Diego and this contact developed into an affair in 1934.

10 Frida Kahlo was Diego Rivera’s _________ wife? Third. They divorced but remarried in 1940. Their second marriage was just as turbulent as their first.

12 What was the date of Frida Kahlo’s death? July 13, 1954. She died at the age of 47 and there is still speculation about whether or not she committed suicide.

13 What are the famous words Frida wrote in her diary the night before she died? (English translation) “I hope the exit is joyful and I hope never to return.”

14 Lyrics to “Cielito Lindo” Through dark tresses, heavenly one, a pair of deep brown eyes lower as they approach, a stolen glance. Refrain: Ay, ay, ay, ay, sing and don't cry, heavenly one, for singing gladdens hearts. A bird that abandons his first nest, heavenly one, then finds it occupied by another, deserves to lose it. (Refrain) That beauty mark you have next to your mouth, heavenly one, don't share with anyone but me who appreciates it. (Refrain) If your little mouth, my dark girl, were made of sugar, I would spend my time enjoying its sweetness. (Refrain) From your house to mine there is no more than a step. Before your mother comes, heavenly one, give me a hug. (Refrain) Cupid shot off an arrow, heavenly one, And though he was playing, I was wounded. (Refrain) 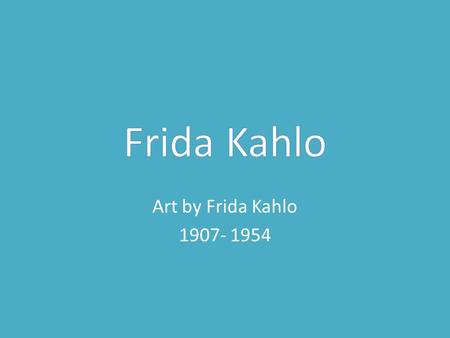 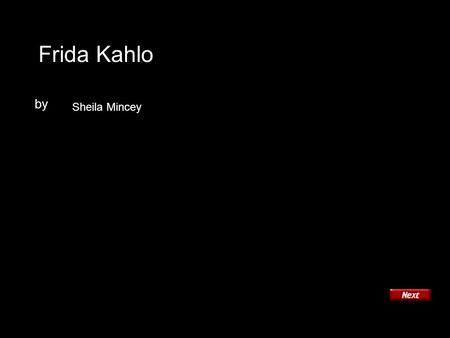 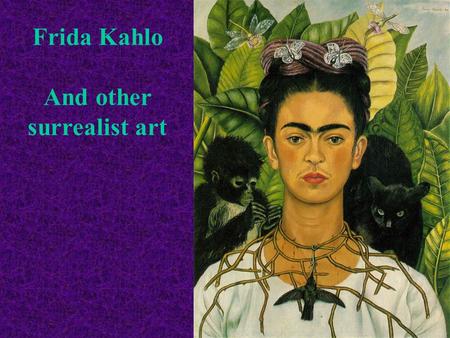 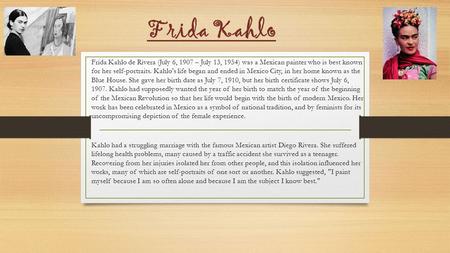